Yesterday I rode Highway 20 from the Silver Star gate on the east side, up and over to the Ross Lake Recreation Area, and then back again. Currently, the road is snow-free and closed to motor vehicles for the entire stretch. I took enough pictures that I decided to write a blog post about it. (I should probably mention that we moved to Mazama in January, so this was something of a local ride for me – no quarantine rules broken! 🙂

My original plan was to be on my bike by 6 am. All was going according to plan and I was driving west on Highway 20 by 545 am. Then, approx 3 miles past the Early Winters campground, I noticed two white canids on the side of the road. There were no houses or private property nearby, so my first thought was albino coyotes, or small white wolves (hey, it was early), or something similarly wild. As I slowed to a stop, I realized they were almost certainly huskies, not coyotes. However, after playing this April Fool’s Day joke 5 years ago, I wanted to be very careful not to become a real-life punchline. Upon closer examination, they were definitely dogs. I slowed to a stop and opened my car door, and they came right up to me, and eventually hopped in the back seat. One dog had a collar but no tags. The other dog was naked. It was still too early for any vet to be open, so I couldn’t take them to get scanned for a microchip. 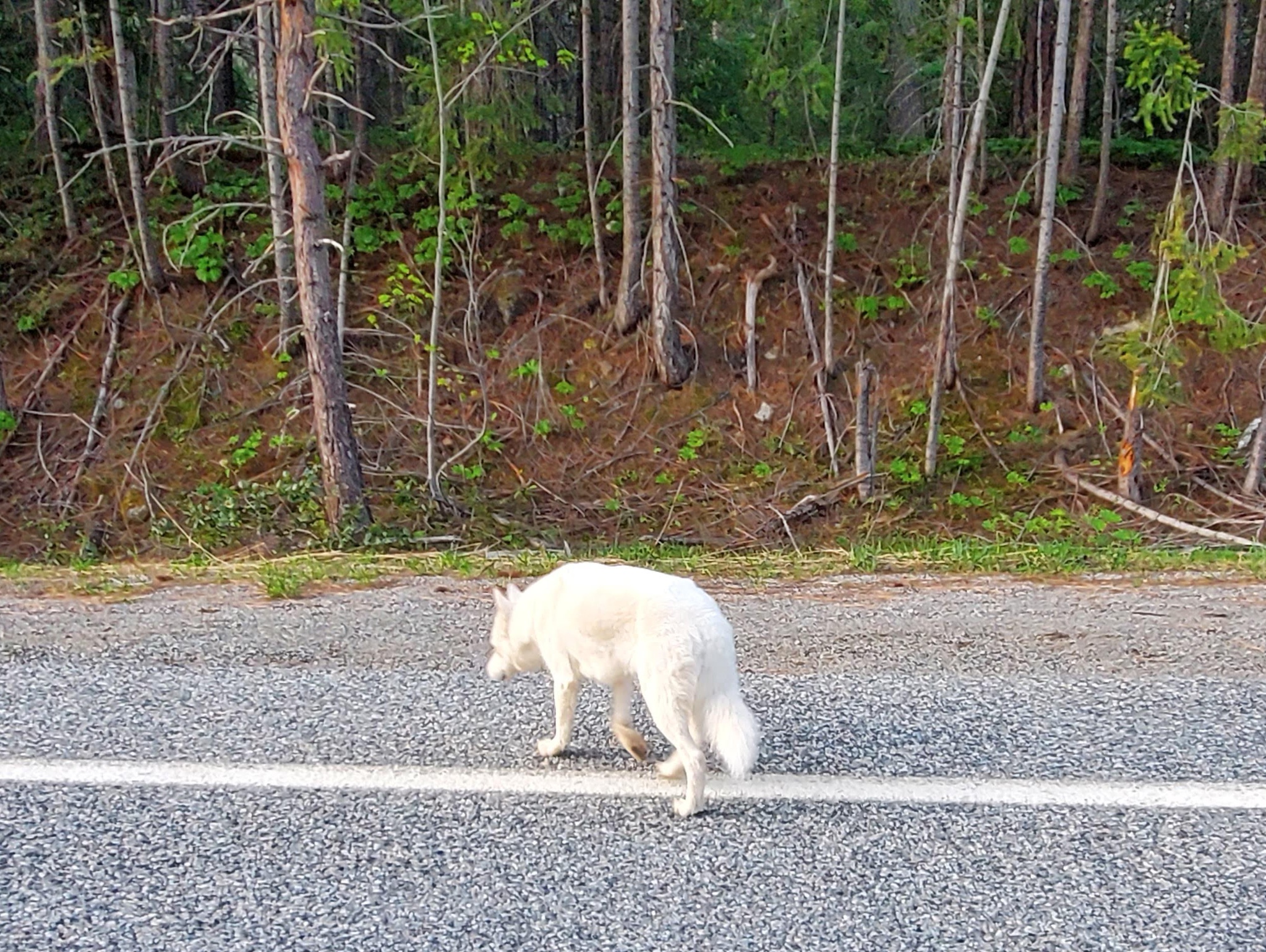 What in the heck is that? 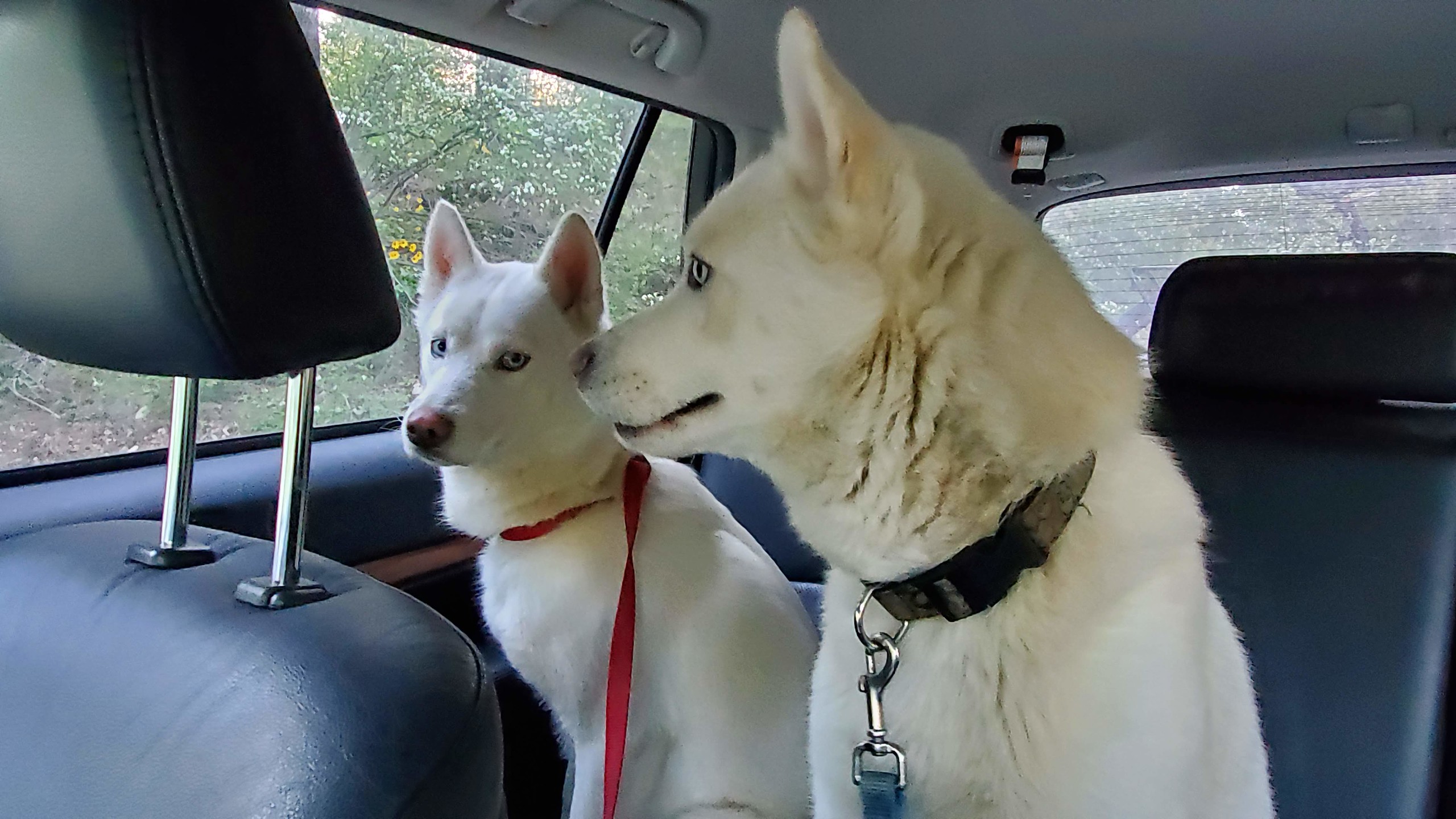 I was so glad I’d stumbled upon them before they got hit by a car or taken out by real coyotes, but I was also kinda bummed because I could see my long ride slipping away from me, as I imagined how long it would take to find the owners. Oh well.
I turned around, went home, and with Tom’s help, gave them some water, a little food, and made sure they were comfy and warm in our garage. We put them in crates because I didn’t want them escaping again (presumably they had escaped from their home…) As soon as we shut the crate door, the smaller female lay down and curled up comfortably, while the larger male started pawing at the crate door, wiggling it back and forth. I could see who the trouble-maker was in this family! (We have a trouble-maker dog too – Maggie! – and I love ’em for who they are.)
I posted on methownet.com and Facebook, and hoped for the best. To my pleasant surprise, not 30 minutes after posting on methownet, someone texted me with information about the owners. Only 1.5 hrs after finding the dogs, I had returned them to their very grateful and happy owners, and was back on my way! Dogs saved AND bike ride still happening! Woohoo!

I was on my bike by 730, pedaling happily up the highway. I’d intentionally overpacked, because I wanted to be 100% sure I could take care of myself if something went awry. I wasn’t carrying a full sleep kit, but I was carrying enough that I could shiver bivy at 5000 ft without putting myself in any real danger. I had also refreshed my memory on how to fix a tubeless flat, how to repair a broken chain, and how to replace a broken derailleur hanger – and was carrying the tools/parts necessary to do all those things.  Plus of course, my Inreach, so I could easily converse with Tom. I was determined not to be “that girl” – yknow, the one who requires SAR due to a bike malfunction or some other silly reason. #RecreateResponsibly in the time of COVID-19.

I reached Washington Pass relatively quickly, thanks to starting half-way up the climb at Silver Star. I took a few quick pics of Liberty Bell and the Early Winter Spires, stopped again for more photos of Cutthroat Peak and Whistler Mountain, and then flew down the rest of the descent. I’d ridden up to Washington Pass a few times in the last several months, but hadn’t been beyond it since last fall. It was so nice to get even deeper in to the North Cascades. 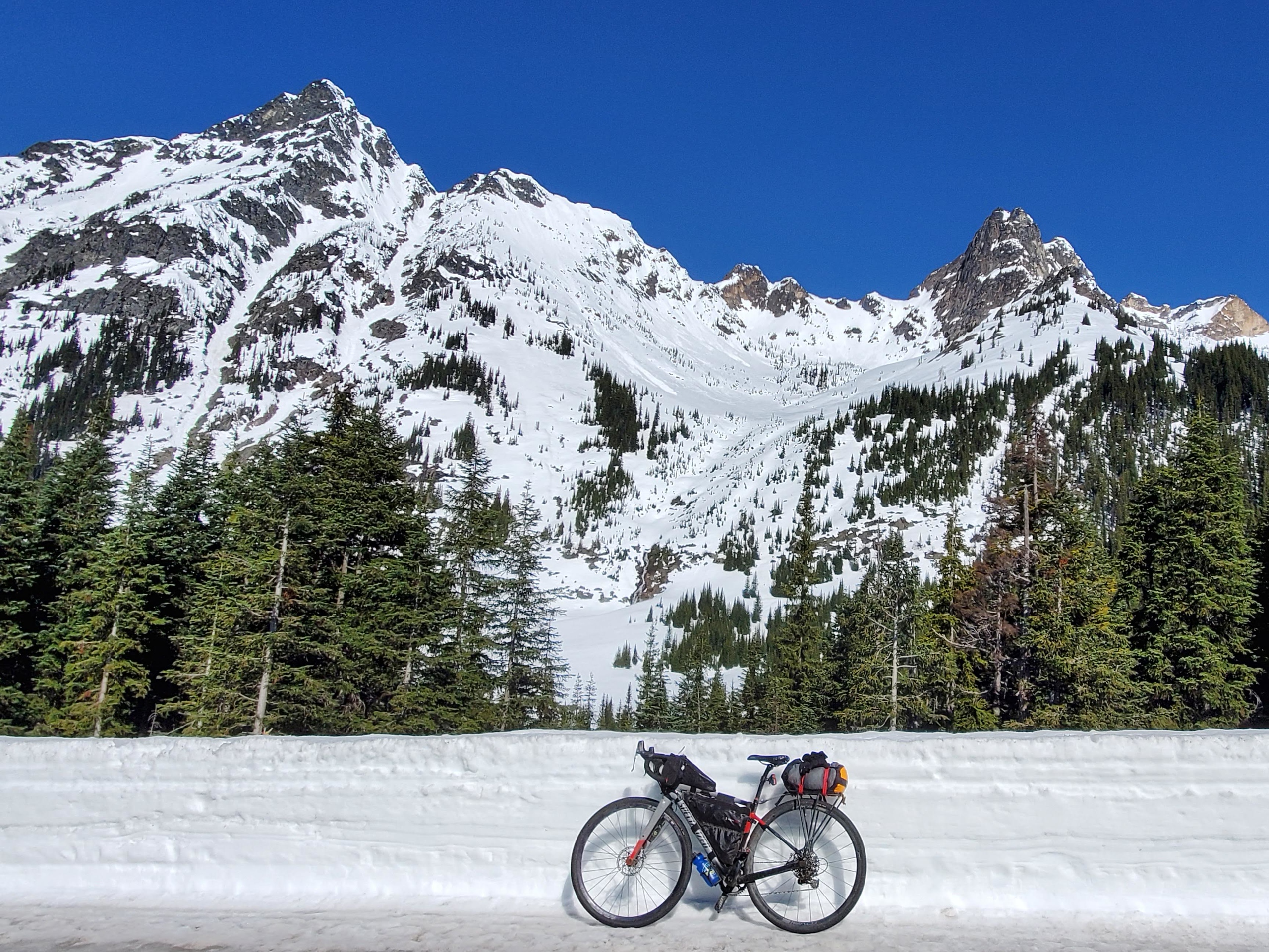 The climb up Rainy Pass was short but painful… I think my legs thought they were done climbing when we reached Washington Pass. Hahaha. There was still a significant amount of snow at Rainy Pass – probably about six feet? I snapped another photo and settled in for a long descent, during which I learned that I much prefer to do the bulk of the climbing first, and save the descent for last. It’s not quite as fun to blast downhill for 22 miles when you know you have to turn around and climb right back up it that same day. 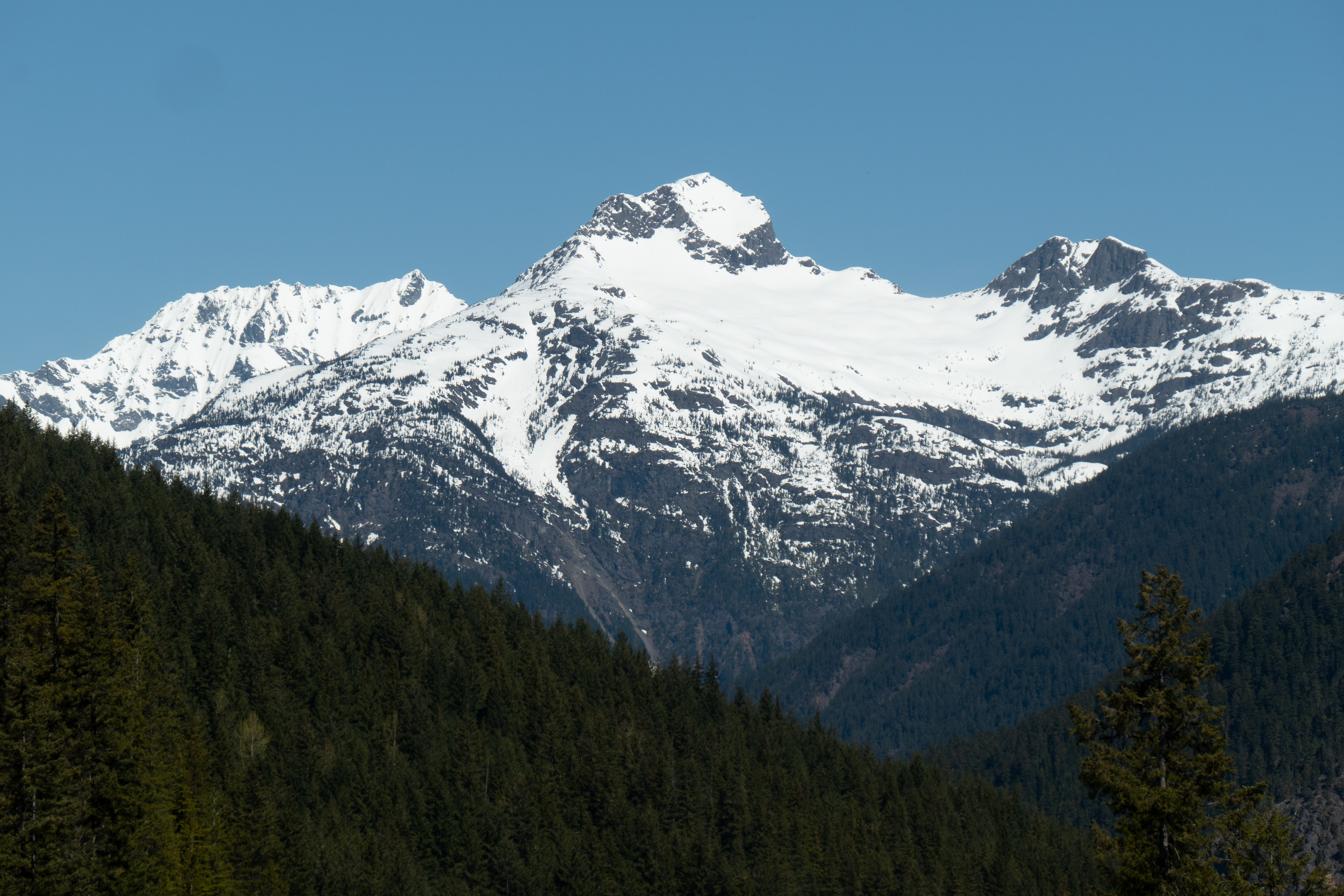 I reached the border of Ross Lake Recreation Area and contemplated descending even further towards Newhalem. But I was already dreading the climb back up, and I was also pretty sure Ross Lake Rec Area was closed. I texted Tom on the Inreach to confirm – yes, it was closed. Turnaround time.

Turnaround point. SO MANY BEES.

I quickly heated up on the long climb back towards Rainy Pass, and stopped multiple times to stand under roadside waterfalls and cool off. Heaven! As I was climbing, a guy I had seen earlier in the day rode up behind me, and we started chatting. He mentioned that he had gone a few miles past the Ross Lake Rec Area boundary, and got stopped by a park ranger. The ranger explained that the road was completely closed in the National Park/Rec Area. Not just seasonal closure, but a “covid closure.” No cars, no bikes, no one. Just an FYI for those who might be trying to ride through that area anytime soon, from either the west side or the east side. 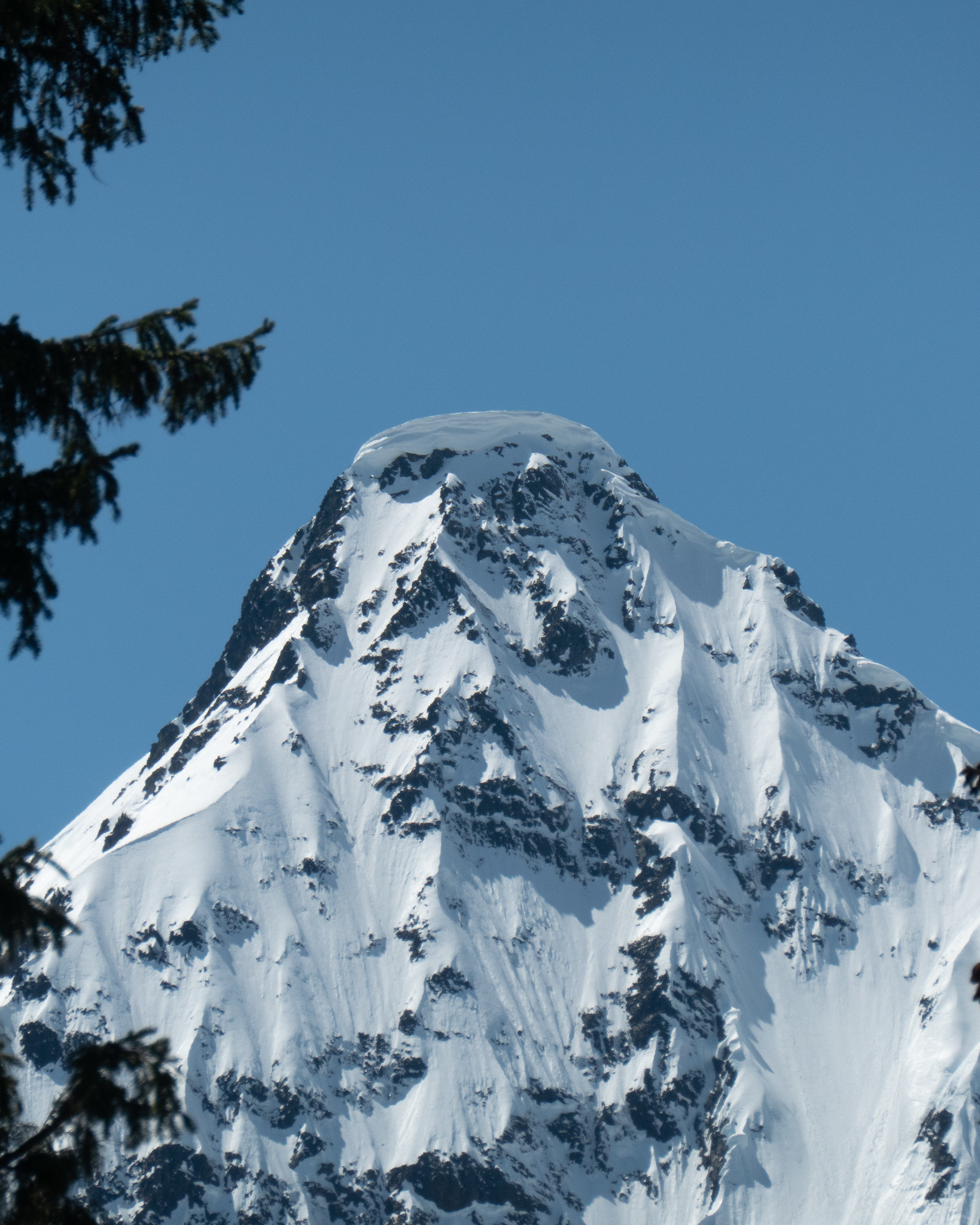 On my second time through Washington Pass, I took the turn-off for the Washington Pass Overlook, tromped through the snow, and enjoyed the view. It was especially fun to gaze down on the hairpin, knowing I would be flying down it myself in just a few minutes.

The ribbon of white is Hwy 20

Overall, it was an awesome day on the bike. 62 mile and 6600 ft of elevation gain made for some tired legs, but also great training for summer adventures!

4 Replies to “Riding to Ross Lake”