Some trips are beautiful in their simplicity. This was not one of those trips.

Initially, it sounds simple: walk from Stehekin to Cascade Pass. That’s it. Approx 25 miles and a little over 5k of gain with side trips. But anyone who is familiar with the North Cascades knows that it’s not quite that simple.

To start with, there’s Stehekin. Getting to Stehekin is not easy, as there are no roads that lead from the outside world into town. This tiny little village is tucked up into the northern corner of Lake Chelan, and is only accessible on foot, by boat, or by plane. Considering how difficult it is to reach the town, it might seem ironic that the word “Stehekin” comes from a Salishan word meaning “the way through.” However, many years ago, before cars and traffic and major interstates, the route from Stehekin to Cascade Pass was indeed one of the best and most efficient ways through the mountains. These days, it’s still one of the best ways, but definitely not the most efficient.

But who cares about efficiency anyway? I’m more interested in adventure and scenery. So when an acquaintance mentioned that he was a pilot, and often flew his small plane into Stehekin to go on trail runs, I jumped at the chance to join him.

I’d figured out how to get into Stehekin, and now I needed to figure out a way home from the other side of the mountains. Luckily I have an incredibly supportive husband who was willing to meet me at the Cascade Pass trailhead. He and my daughter would make a fun day of it, hiking up to meet me while enjoying the gorgeous scenery. And then we would all drive home together.

Although it’s certainly possible to walk or run from Stehekin to Cascade Pass in one day, I decided to do it in two. My pilot friend wasn’t keen on flying super early in the morning, and my husband wanted to be home by dinnertime, so it just made sense to spread out my trip over two days. I planned to start hiking mid-morning on Day 1, and finish mid-day on Day 2.

Amazingly, it only took a few months to get all of those stars to align, and last weekend I drove from my house to the Fall City air strip, where my pilot friend keeps his plane. It was not a bluebird day, so even upon take-off we still weren’t totally sure we’d be able to land in Stehekin. Ultimately it all worked out.

There was something undeniably special about flying in a small plane over mountains that I recognized, loved, and had spent many years exploring. I had a blast trying to name each peak, lake and ridgeline as we flew past. After spending the last decade wandering around the Cascades, the views from this flight reminded me that yes, these mountains really are that special. When you’re shwacking up an alder-choked valley, swatting away mosquitoes and shredding the skin on your lower legs, it’s easy to forget where you are, and how lucky you are to be there. This flight helped me remember. 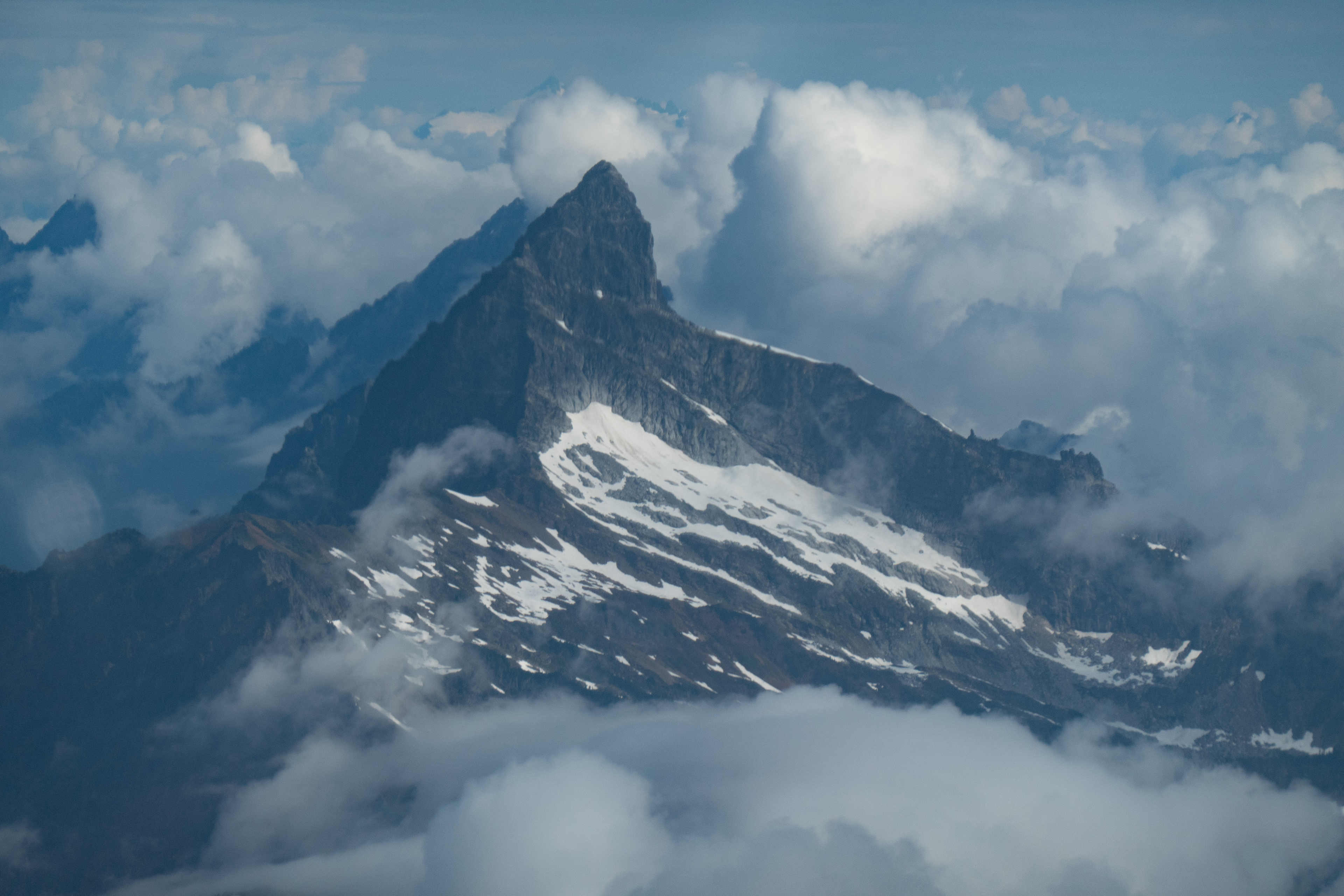 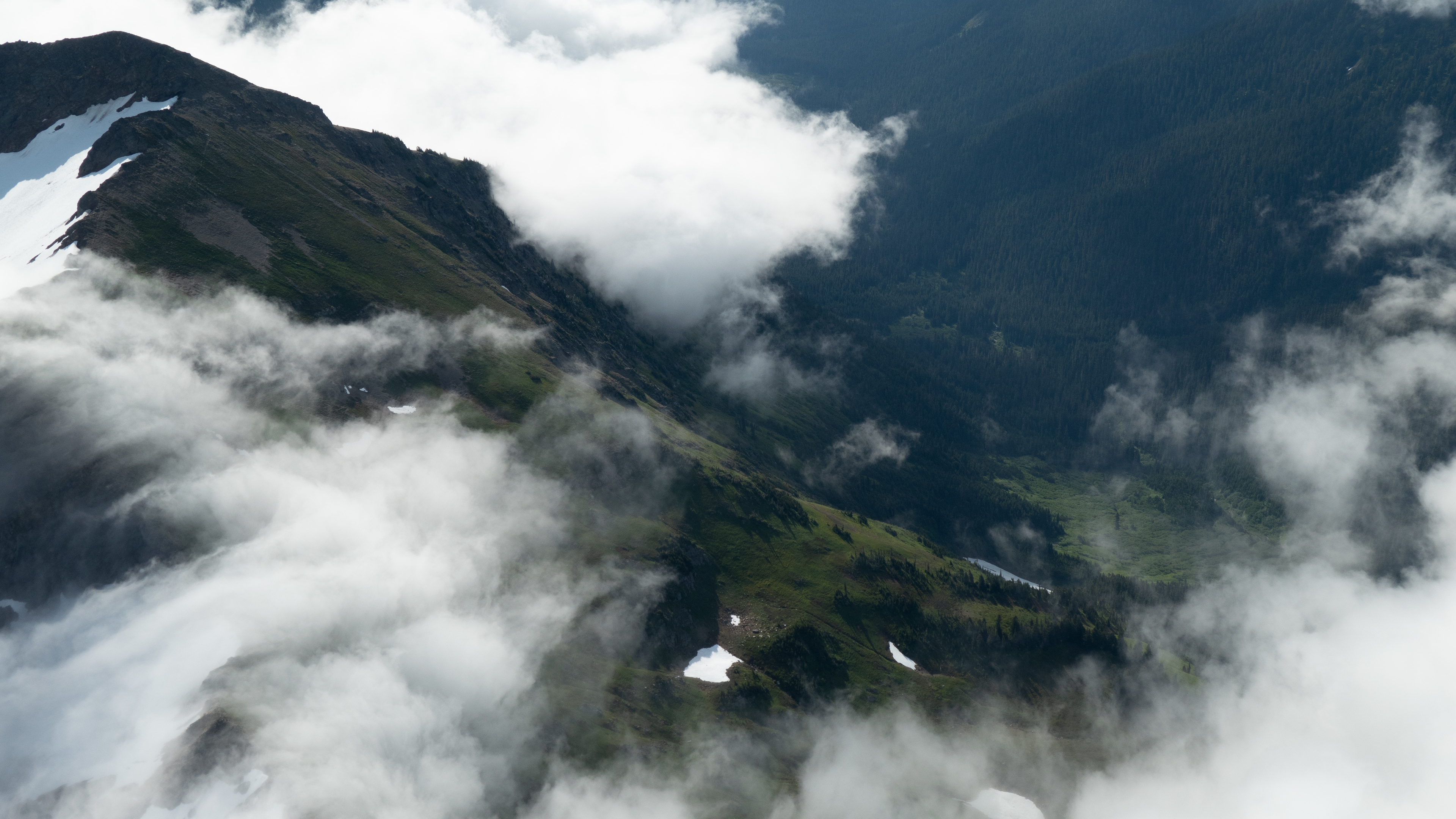 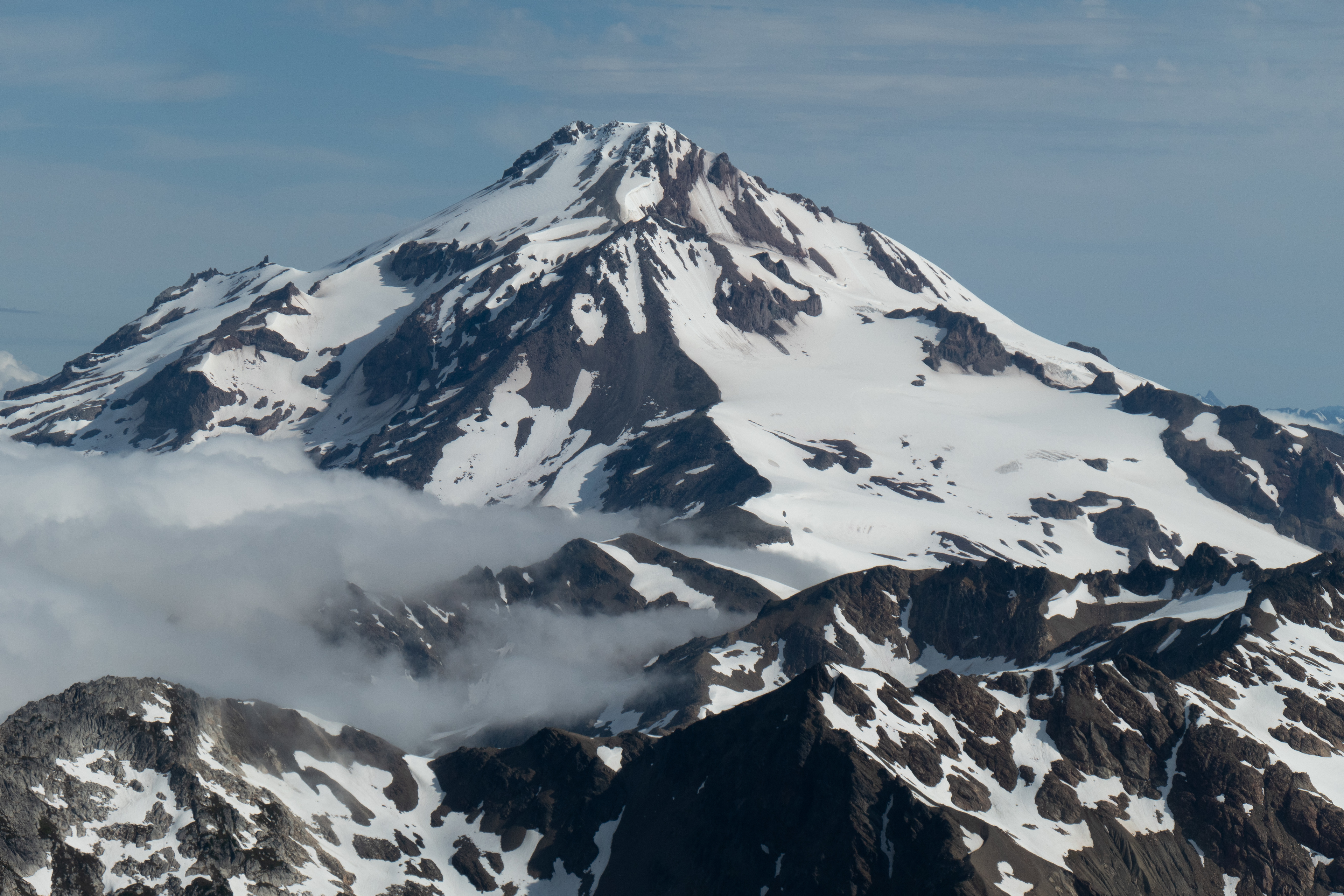 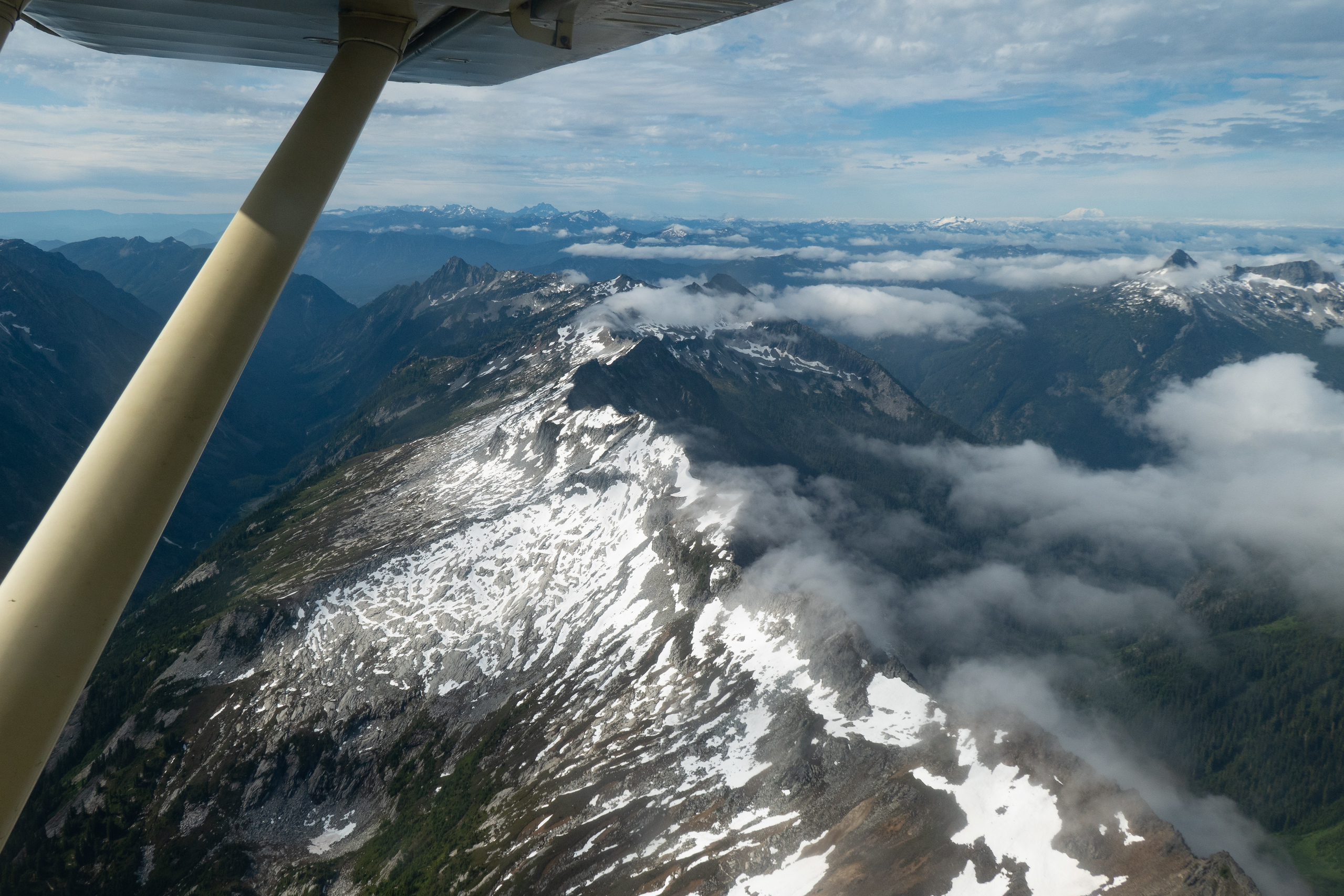 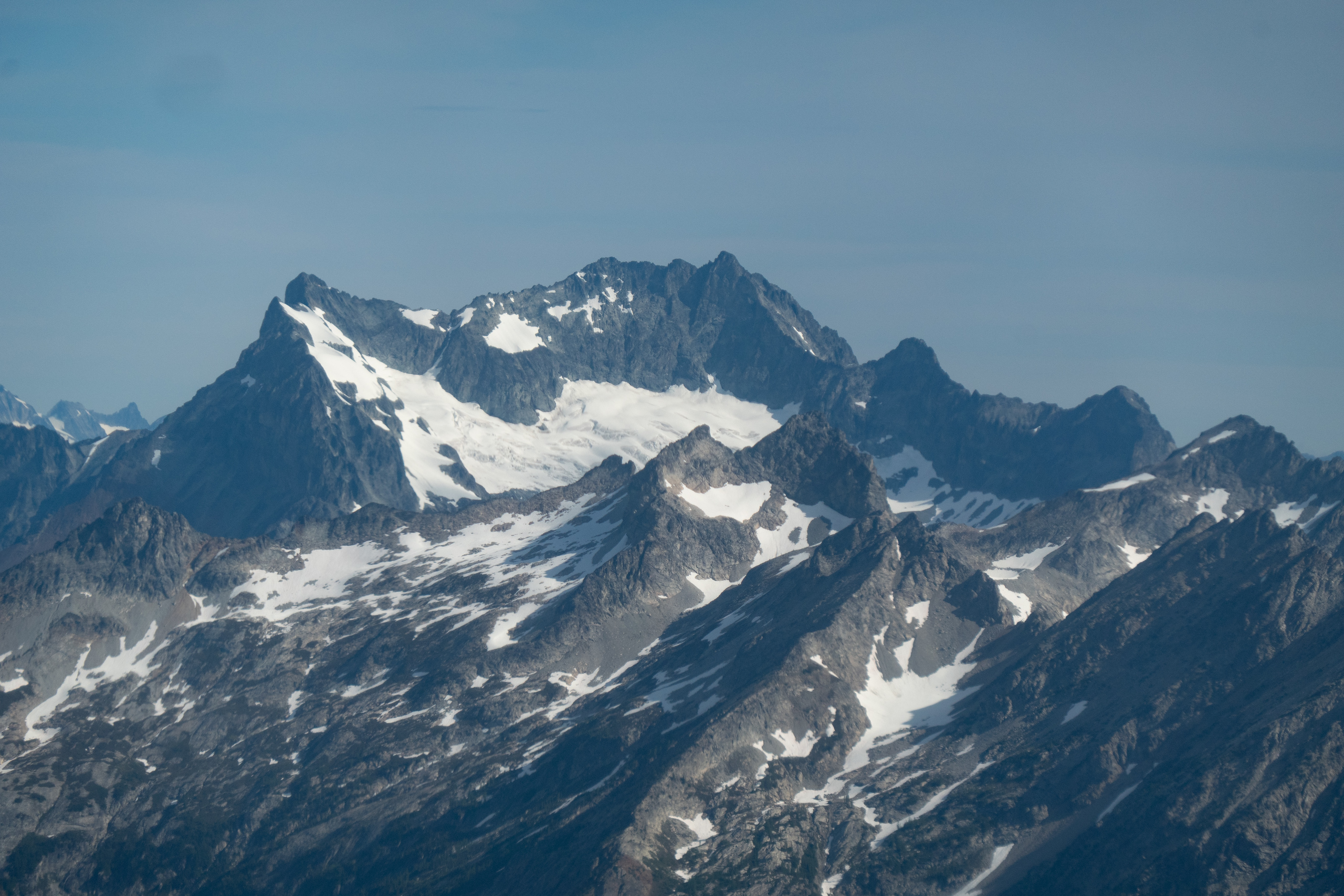 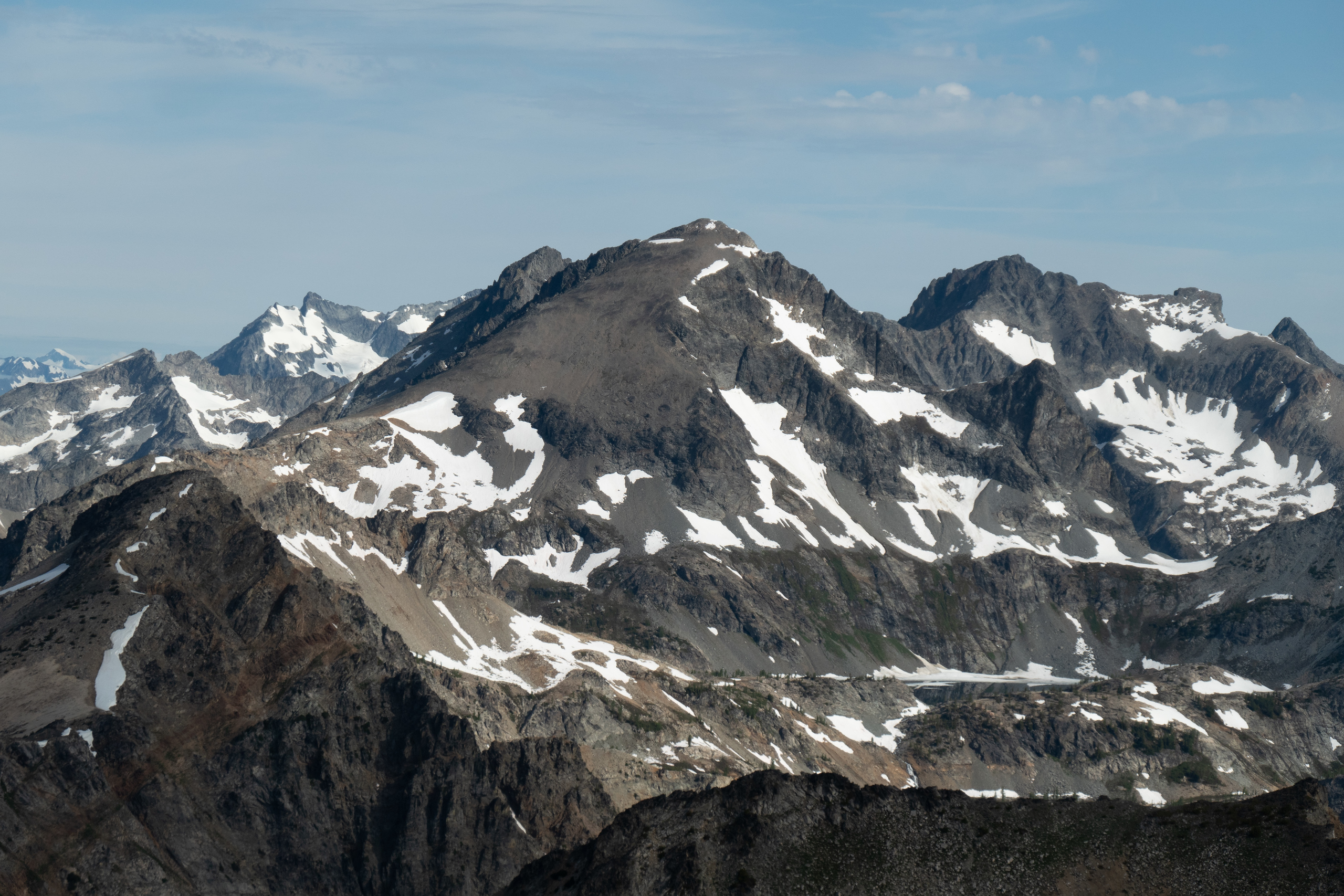 And this guy? Somewhere in the Entiat. (Edit: Maude) 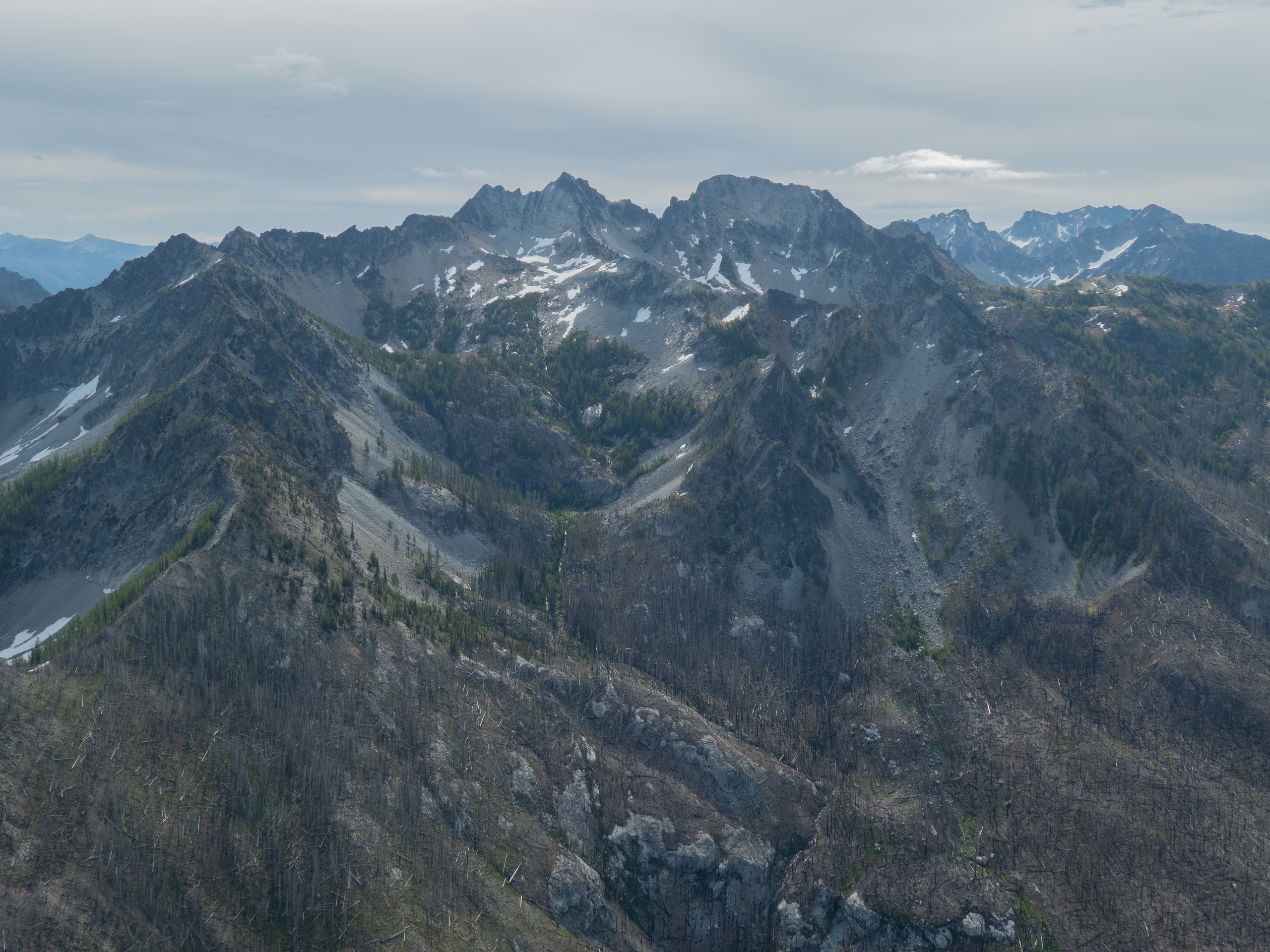 Stehekin River Valley – the way through

Flying over the town of Stehekin 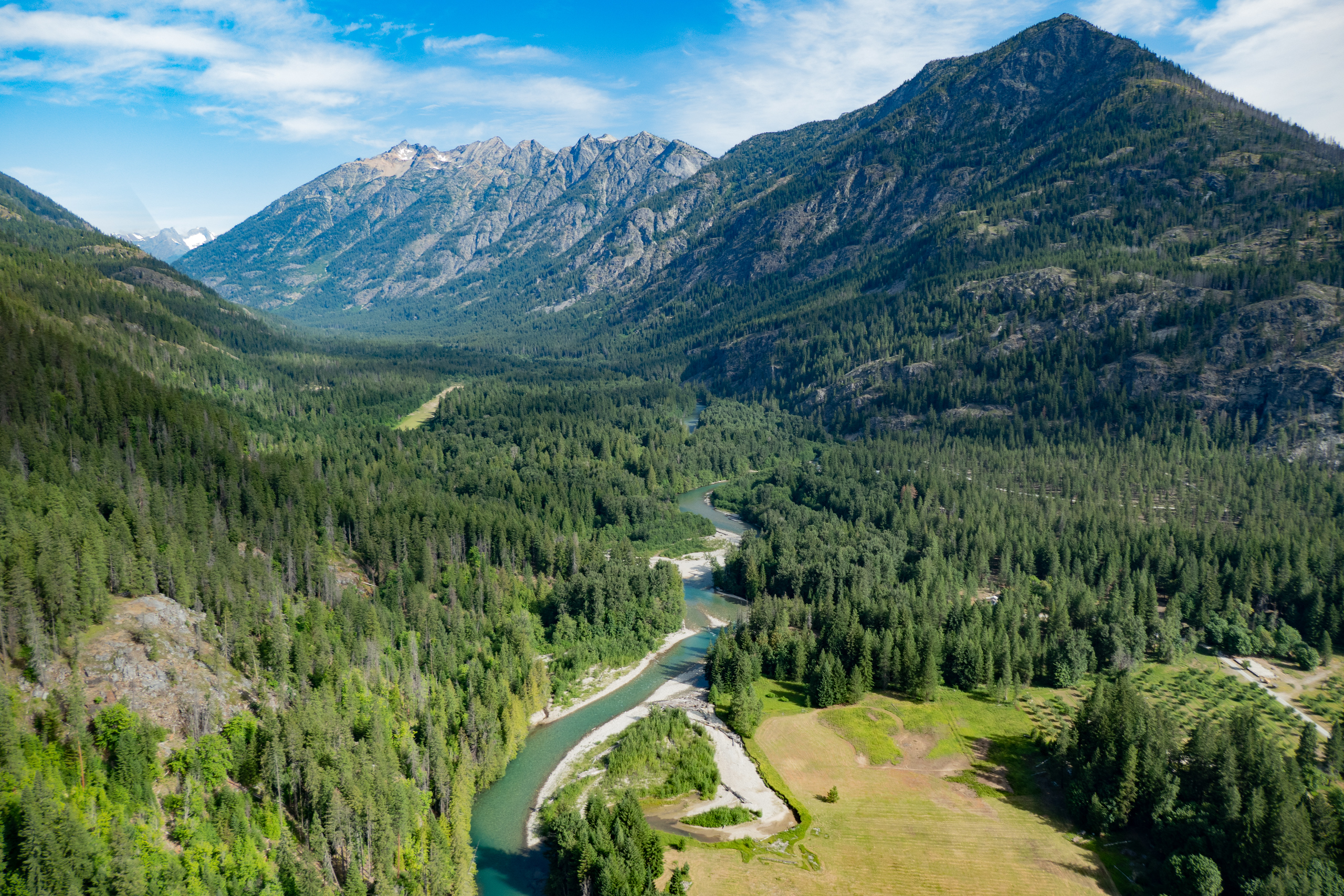 Stehekin River, with the air strip in the distance

We landed at the Stehekin air strip shortly after 9 am. After thanking my friend and forcing him to take gas money (he stubbornly refused, but I’m stubborner! 😉 ) I was walking up the Stehekin Valley Rd by 9:30 am. Although you can not drive to Stehekin, there is a road that stretches up the lower Stehekin River valley, so you can drive while in the area. The road starts in town at the lake, and dead ends approximately 12 miles later at a trailhead. Over the years, locals have shipped vehicles to Stehekin by ferry, and use them to cruise up and down the road accessing trails, swimming holes, and fishing spots. Hitchhiking along the Stehekin Valley Rd is safe and common. I figured I would walk the road either all the way to the trailhead at the dead end, or hopefully hitch a ride from a passing vehicle.

Huge thanks to Dave for flying me in to Stehekin!

I walked for about 3.5 miles, enjoying the warm air, the occasional views of McGregor Mountain up ahead, and the aquamarine Stehekin River rolling by on my left. I listened to my feet scuff the gravel and thought about what the valley had looked like from the plane, and how I was now walking right through that scenery.  A few cars passed me, but they were all headed the wrong direction, into town.

Stehekin River, from the ground

Just as I was starting to get sick of the road walk, a family of four pulled up in an old SUV, and without hesitation offered me a ride all the way to the end of the road. It was a grandfather, his daughter, and her two boys. They owned a cabin in town, and were headed up the valley for a day of fishing. The grandfather had been visiting Stehekin since he was a boy. I asked him if things had changed much over the years, and he shook his head happily. “Nope, not really!”

They dropped me off at the end of the road, and I started walking towards Cascade Pass. The trail through the lower Stehekin Valley is a gentle grade that alternates between single-track and double-track, and occasionally crosses large creeks tumbling down from the mountains above. 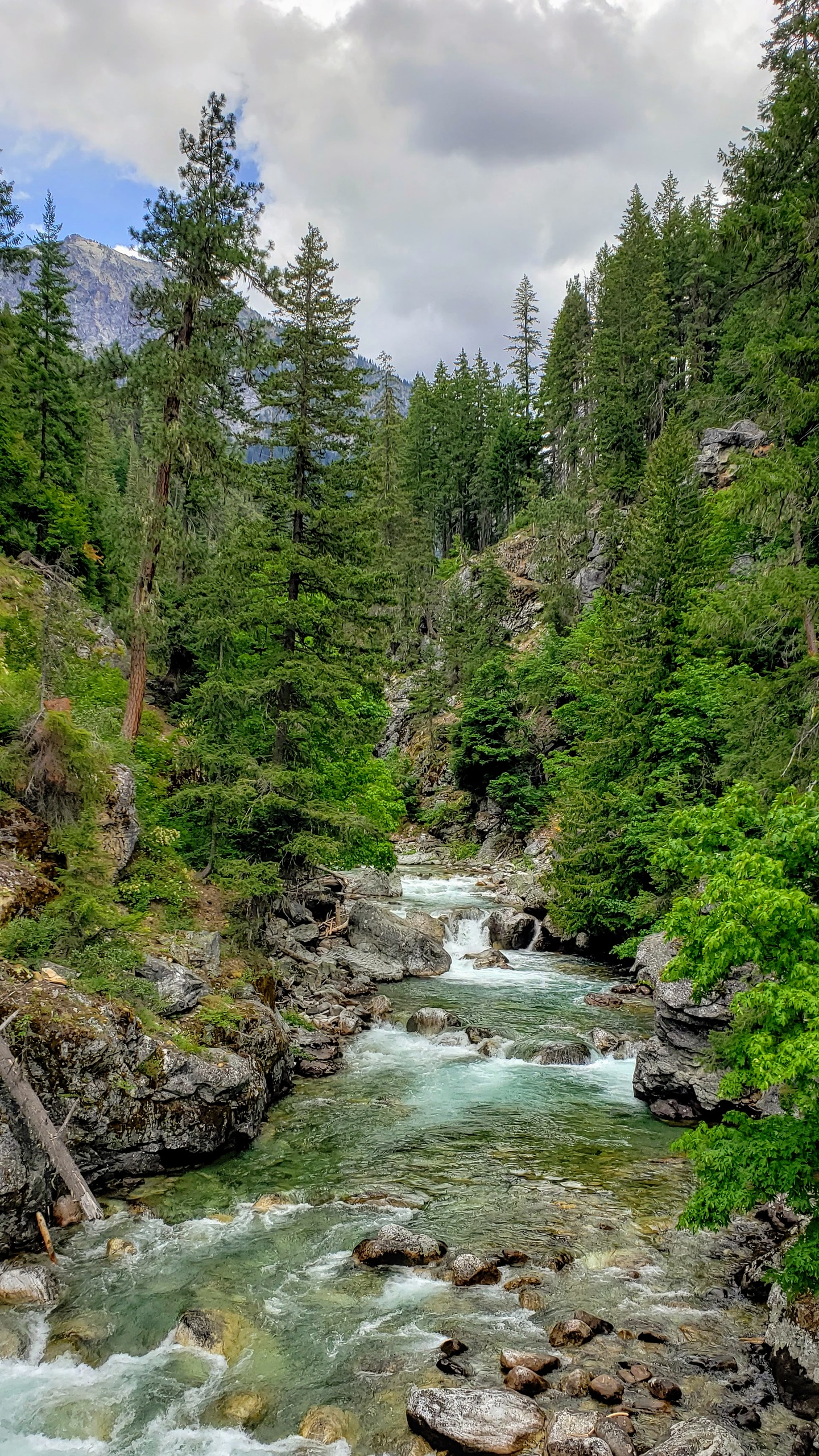 I stopped frequently to take photos but still found myself at Cottonwood Campground, my permitted camp for the night, relatively early in the day. I looked at my map and briefly contemplated heading to Trapper Lake, but I hadn’t done any research ahead of time (there’s no official trail to the lake) and my maps weren’t quite high-resolution enough for off-trail exploring.

Instead, I took my time settling into camp, finding the perfect site, taking more photos, and chatting with the one other party that was camping at Cottonwood that night. They were a friendly group of self-described “empty nesters” who were out for a 4-day trip to celebrate a 60th birthday.
They had originally planned on camping at Pelton Basin for 3 nights, but unfortunately the area was closed due to bear activity, so the park service had sent the group further down the valley to Cottonwood. They were understandably disappointed to be camping in the woods when they’d been planning on sleeping in the high country.

I realized I was glad I’d started in Stehekin and was walking uphill towards Cascade Pass. Most folks who do this route start at the Cascade Pass trailhead and walk net downhill to Stehekin. While this is physically easier, I much preferred saving the alpine for last. When I arrived at Cottonwood I was just starting to get great views of the surrounding glaciated peaks. I found the camp enthralling and a great teaser of what was to come.

Views from Cottonwood Camp – Glory Mountain in the center

I slept well that night, snuggled up in my little one-person tent with the river providing just the right amount of white noise. I awoke at 4:30 am, after a full 8 hours of sleep, just as it was starting to get light. Sunrise on Glory Mountain above camp was indeed glorious, and I sat by the river in silence, drinking coffee and savoring the solitude. Before I knew it, it was 7 am and time for me to get moving again.

Day 2 consisted of hiking from Cottonwood Campground, up and over Cascade Pass, and down to meet my husband and daughter by mid-day. I also took a side trip into Horseshoe Basin, which I can’t recommend highly enough. I ran into a ranger who said most people skip Horseshoe Basin. Don’t be most people! It’s a stunning basin, surrounded by numerous waterfalls and carpeted in meadows full of wildflowers. As I started up the side trail towards the basin, a doe and her speckled fawn trotted up the trail ahead of me. Less than a mile later I met a large buck whom I assume must’ve been Dad. I startled him and he swung his head up to look at me, but held his ground. I marveled at his velvety antlers and long eyelashes, took photo after photo as he nonchalantly chewed his cud, and finally left him to continue wandering through paradise.

Looking back down the valley at Cottonwood Camp

Tiger Lily taller than me 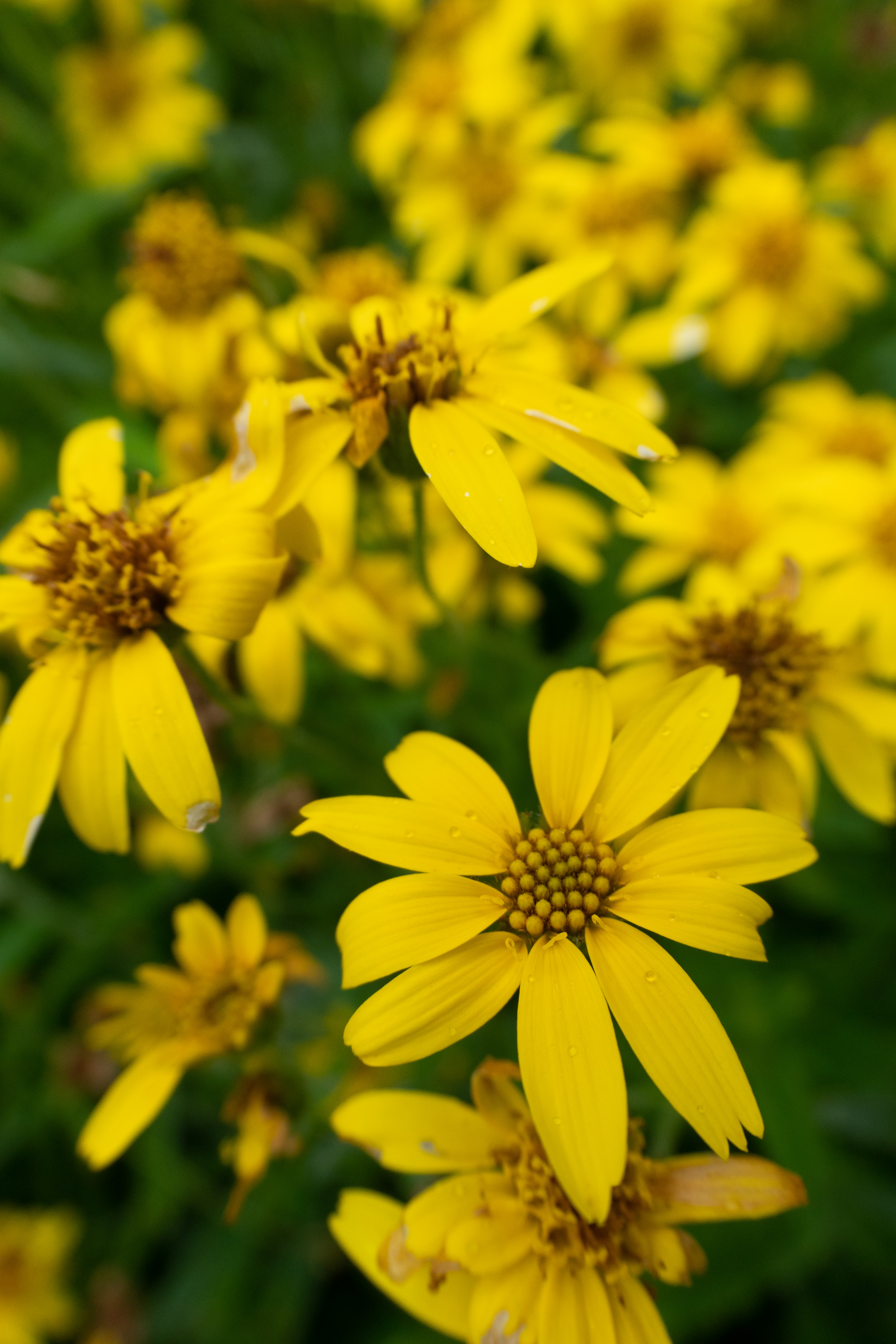 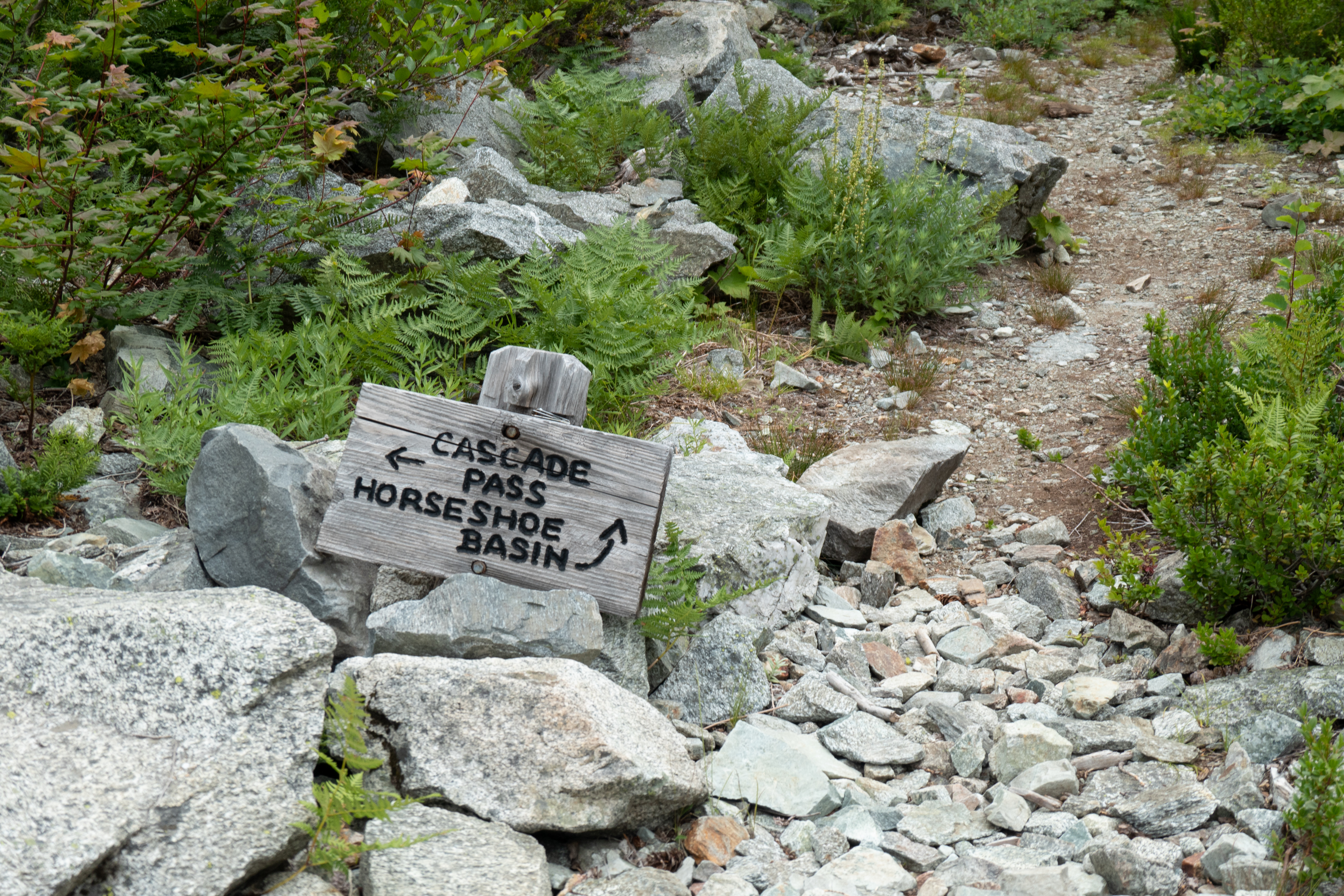 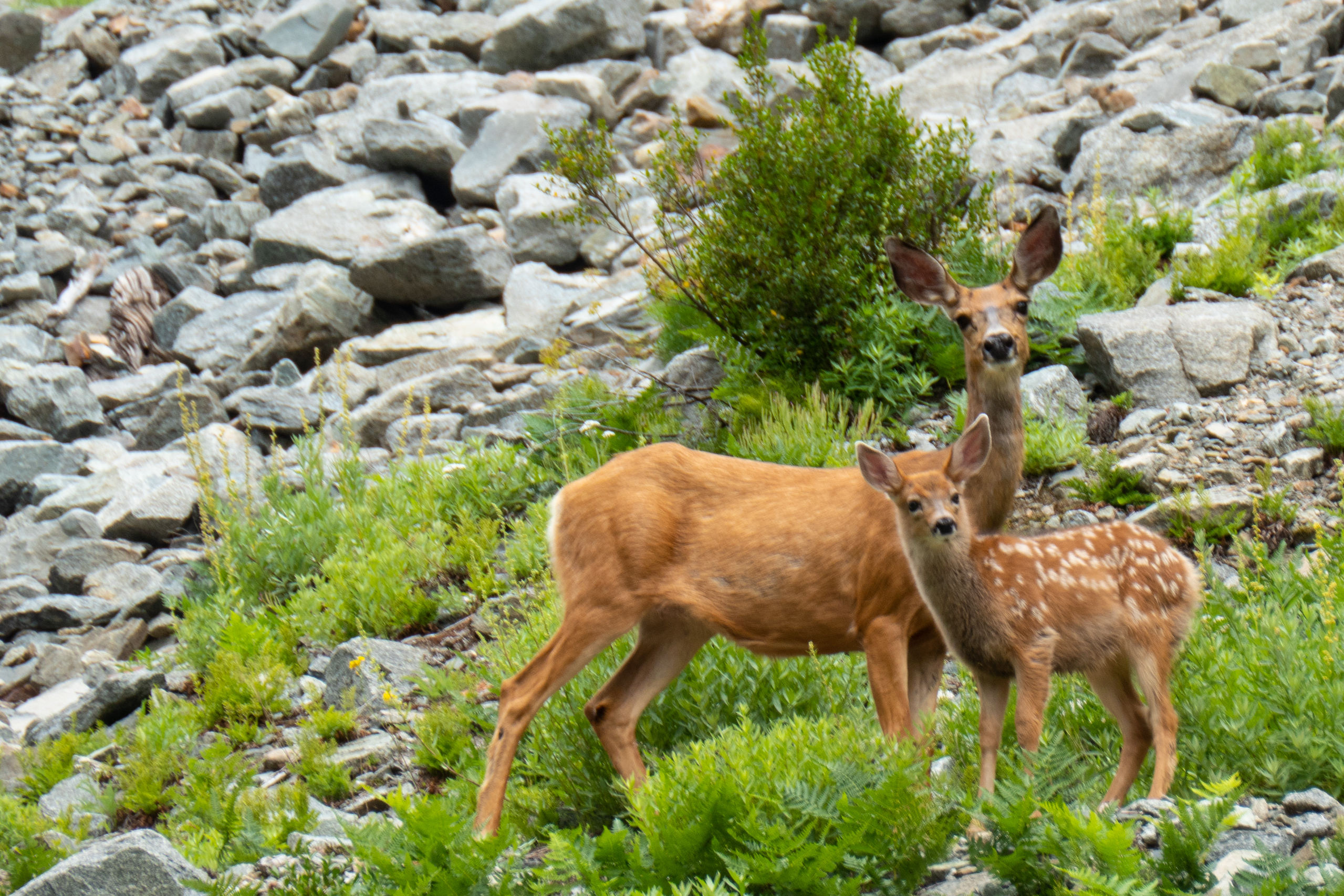 Horseshoe Basin – worth the trip 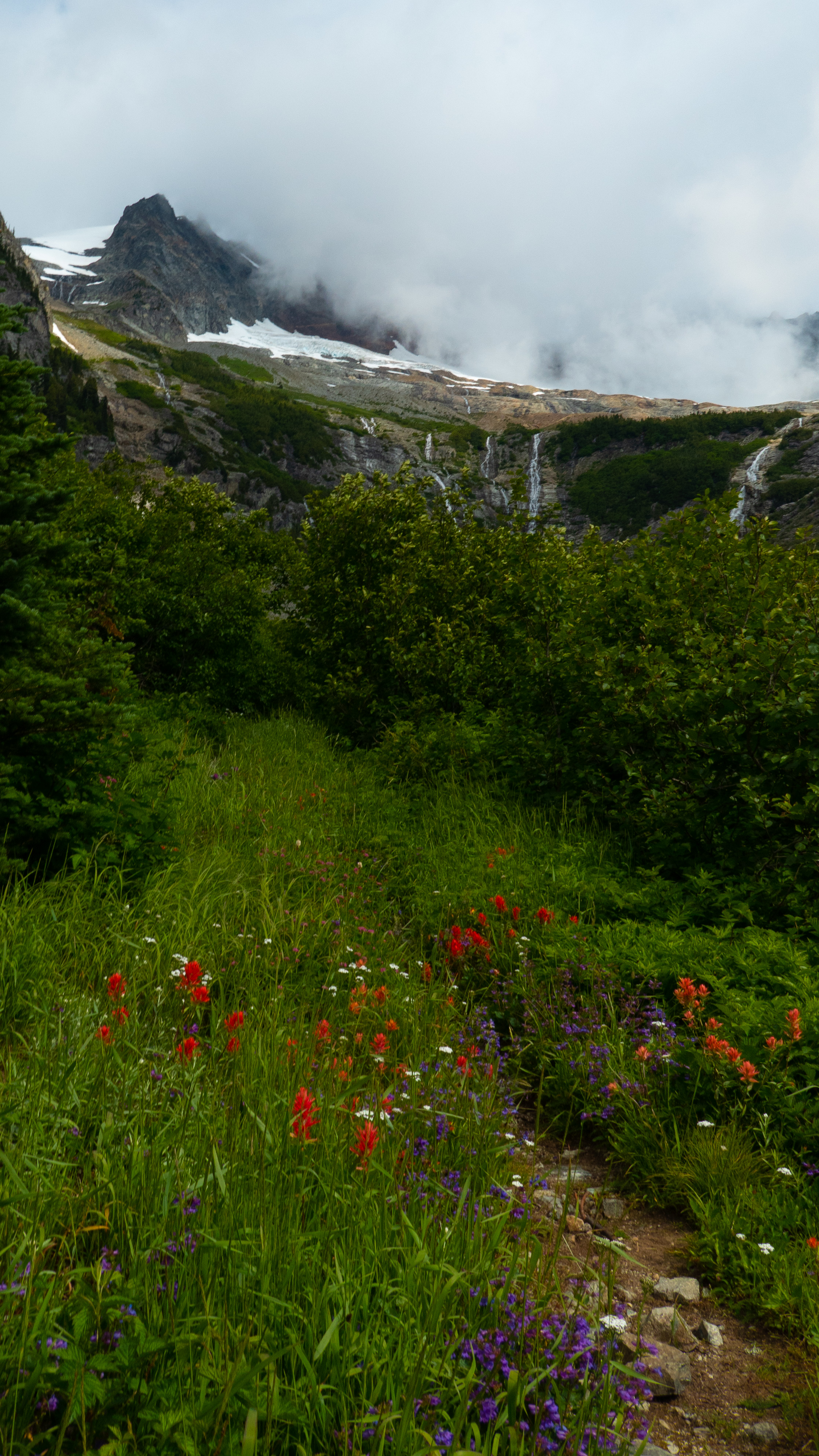 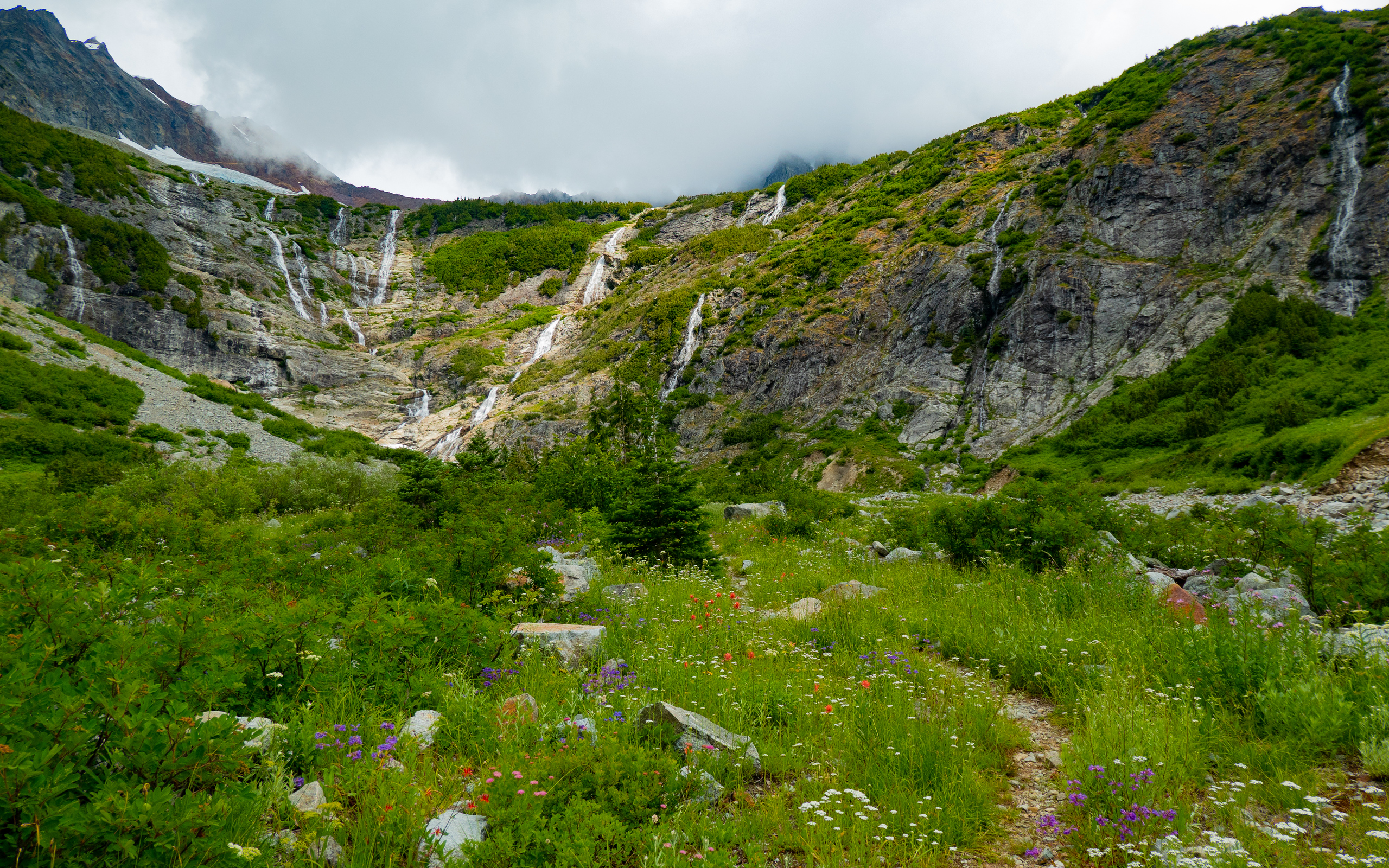 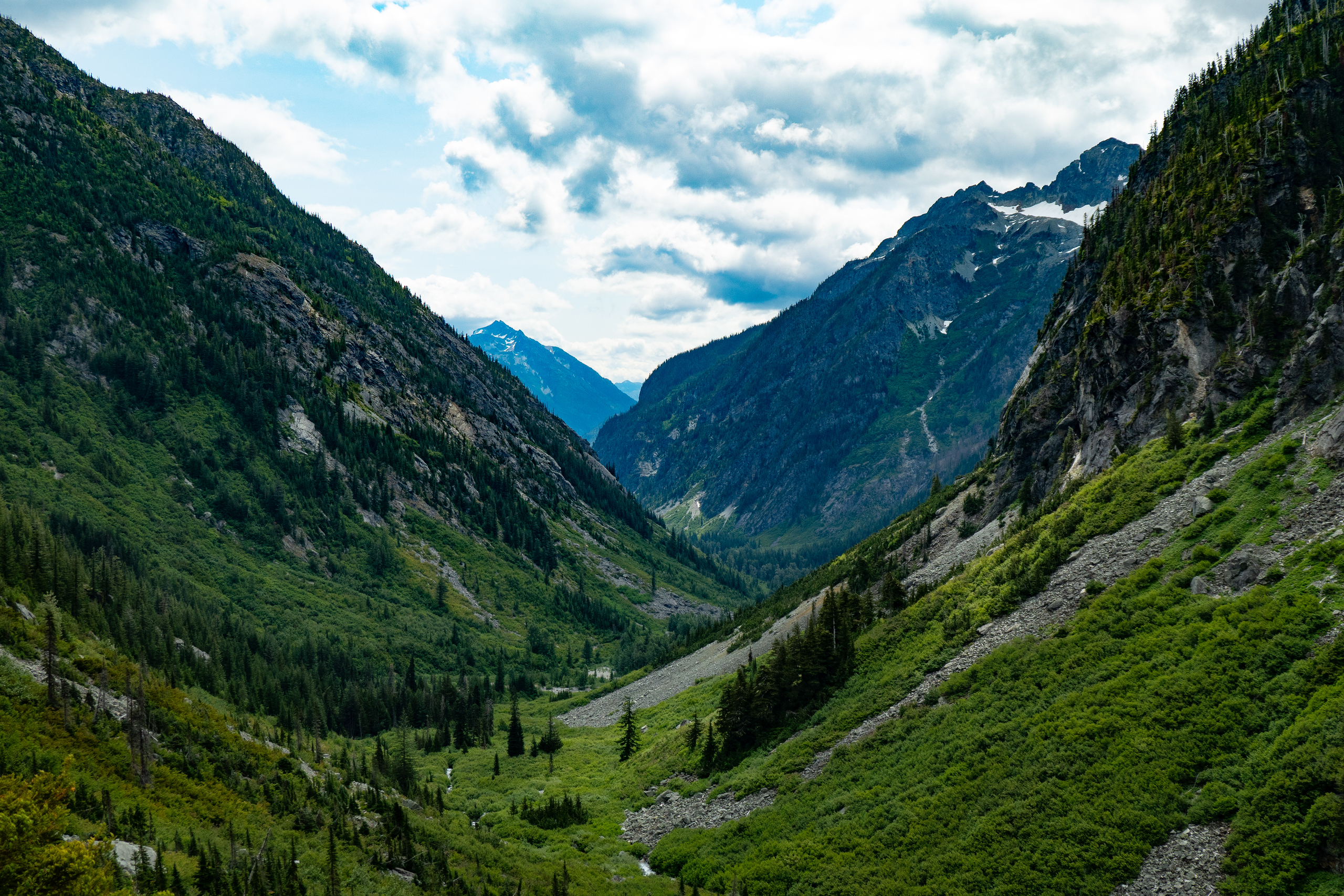 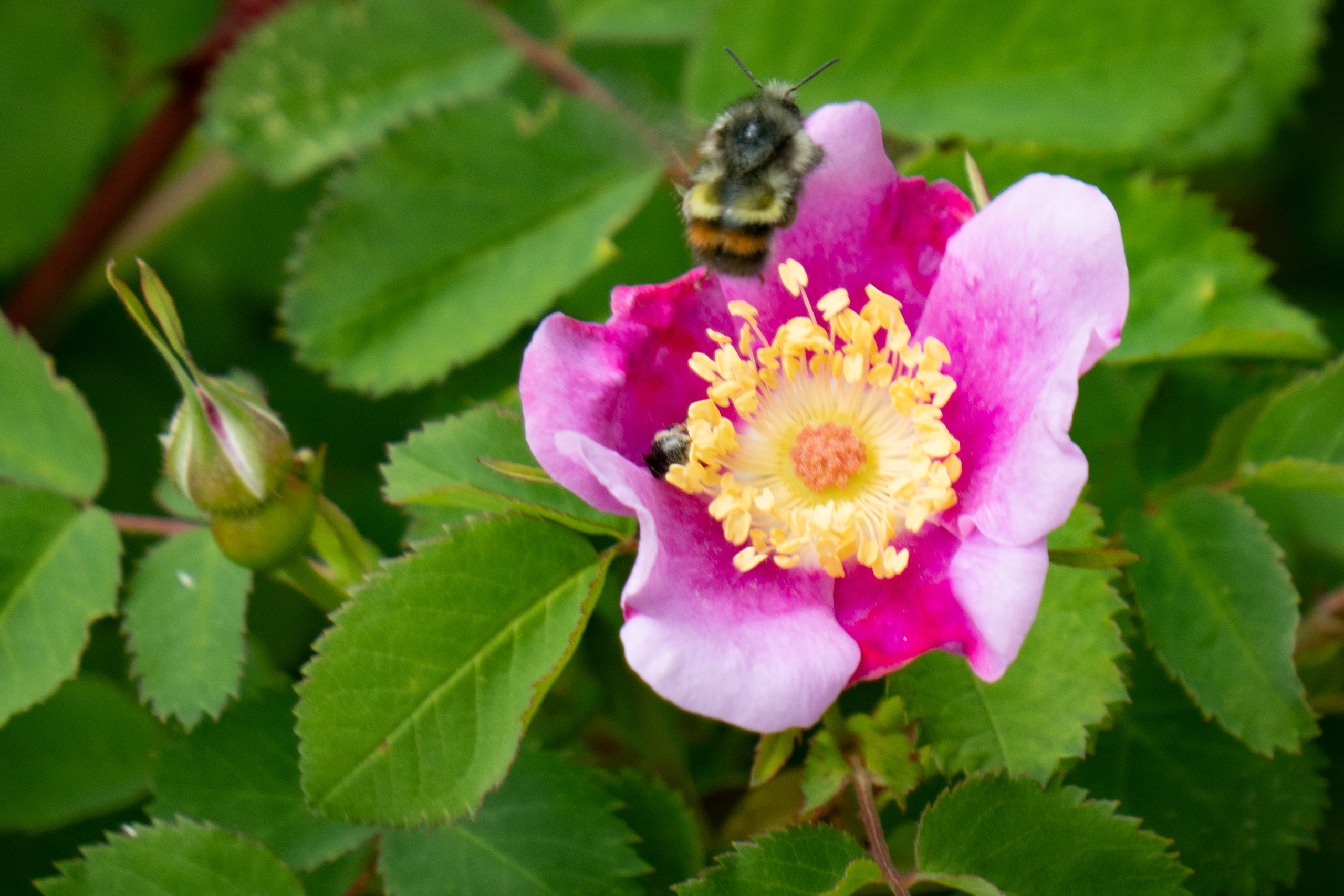 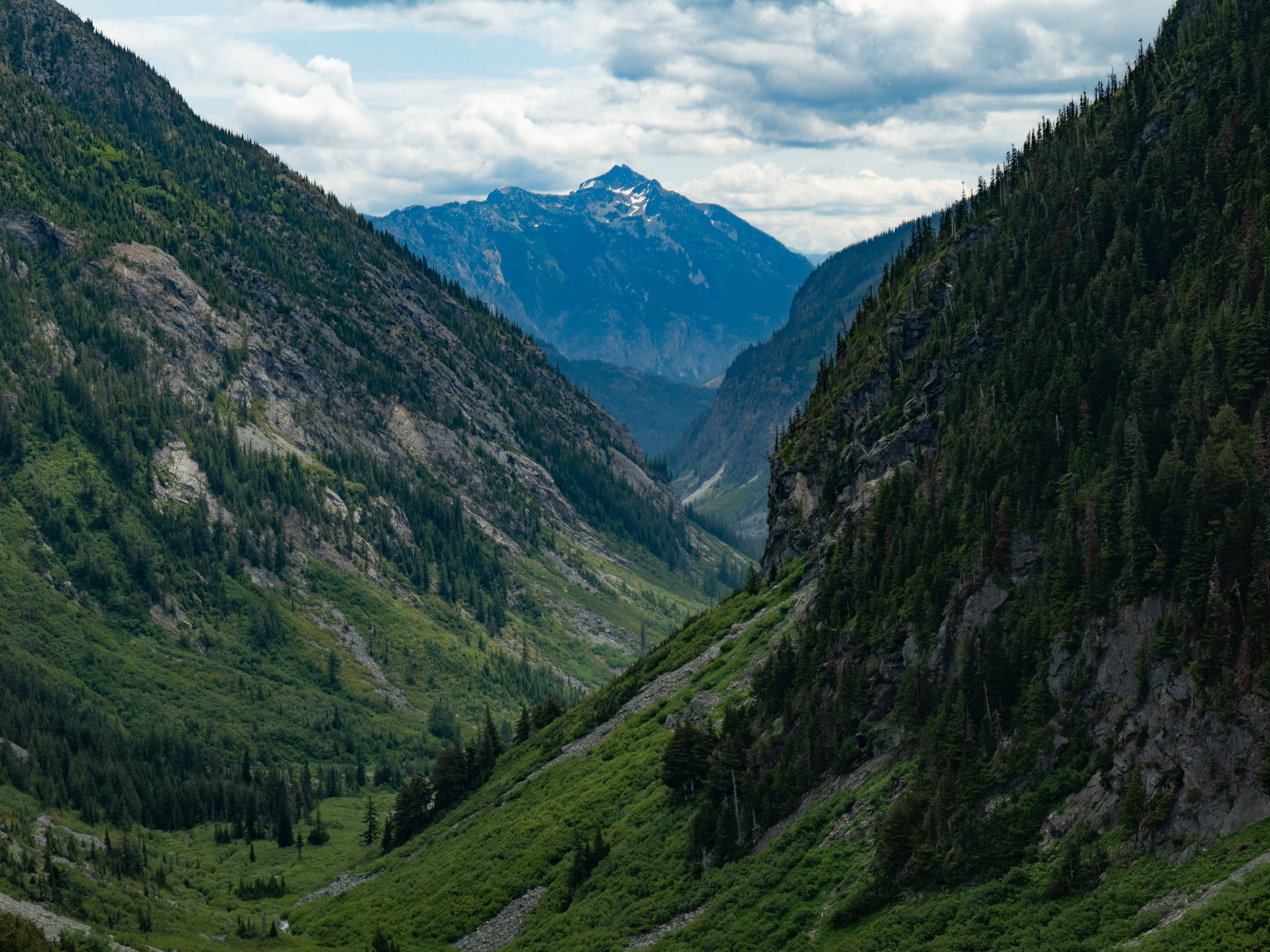 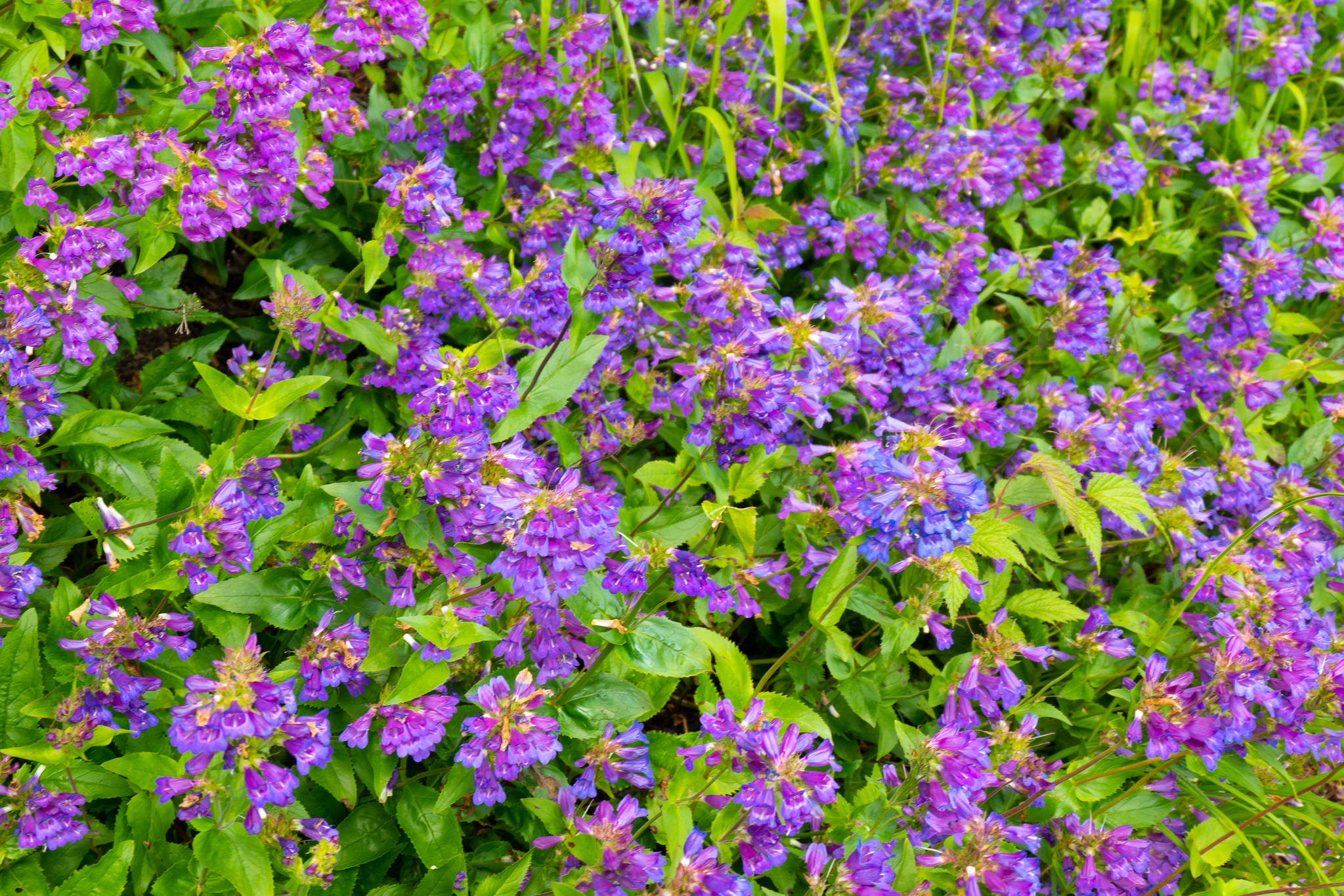 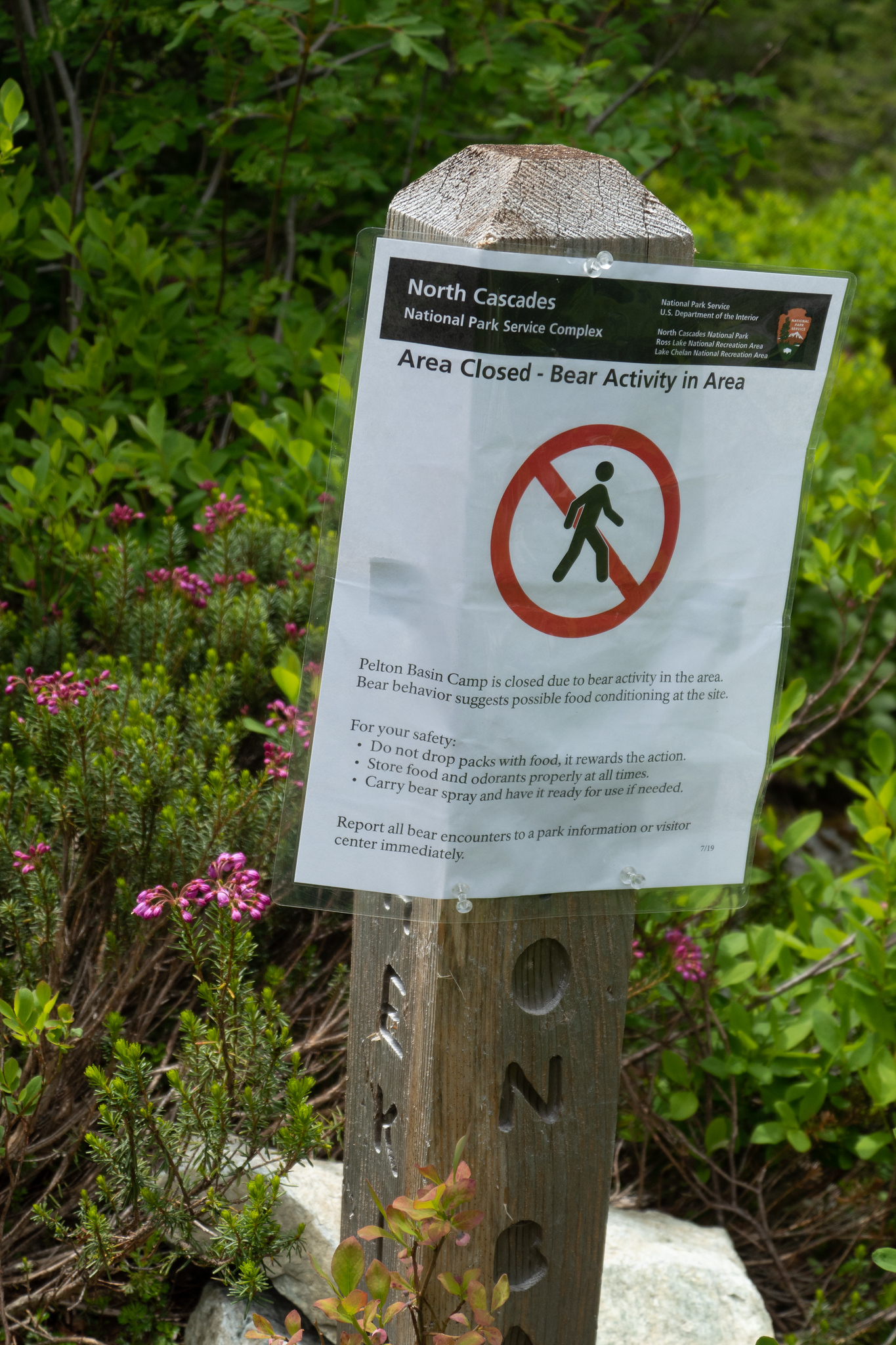 Other than a group camped at Basin Creek, I saw no one on Day 2 until I reached Cascade Pass. It was a beautiful Sunday afternoon and I was expecting crowds at this popular day hiking destination. Although I wouldn’t say Cascade Pass was empty, it wasn’t as busy as I’d anticipated.

Once I crested the pass I felt a smile spread over my face and found myself unconsciously picking up the pace. At this point I knew I was less than 4 miles from seeing Tom and Rowan! I practically skipped down the trail, past overly-friendly marmots and meeping pikas. It had been an incredible weekend in the North Cascades. I was struck again by how grateful I was that everything had worked out so perfectly in terms of weather, transportation, campsites and other logistics. As I passed a guy heading the other direction he paused and looked at me. I was covered in dirt and bug bites, my hair loose, frizzy, and unbrushed around my shoulders. “You look… refreshed!” he said. I laughed. Yep, nailed it. 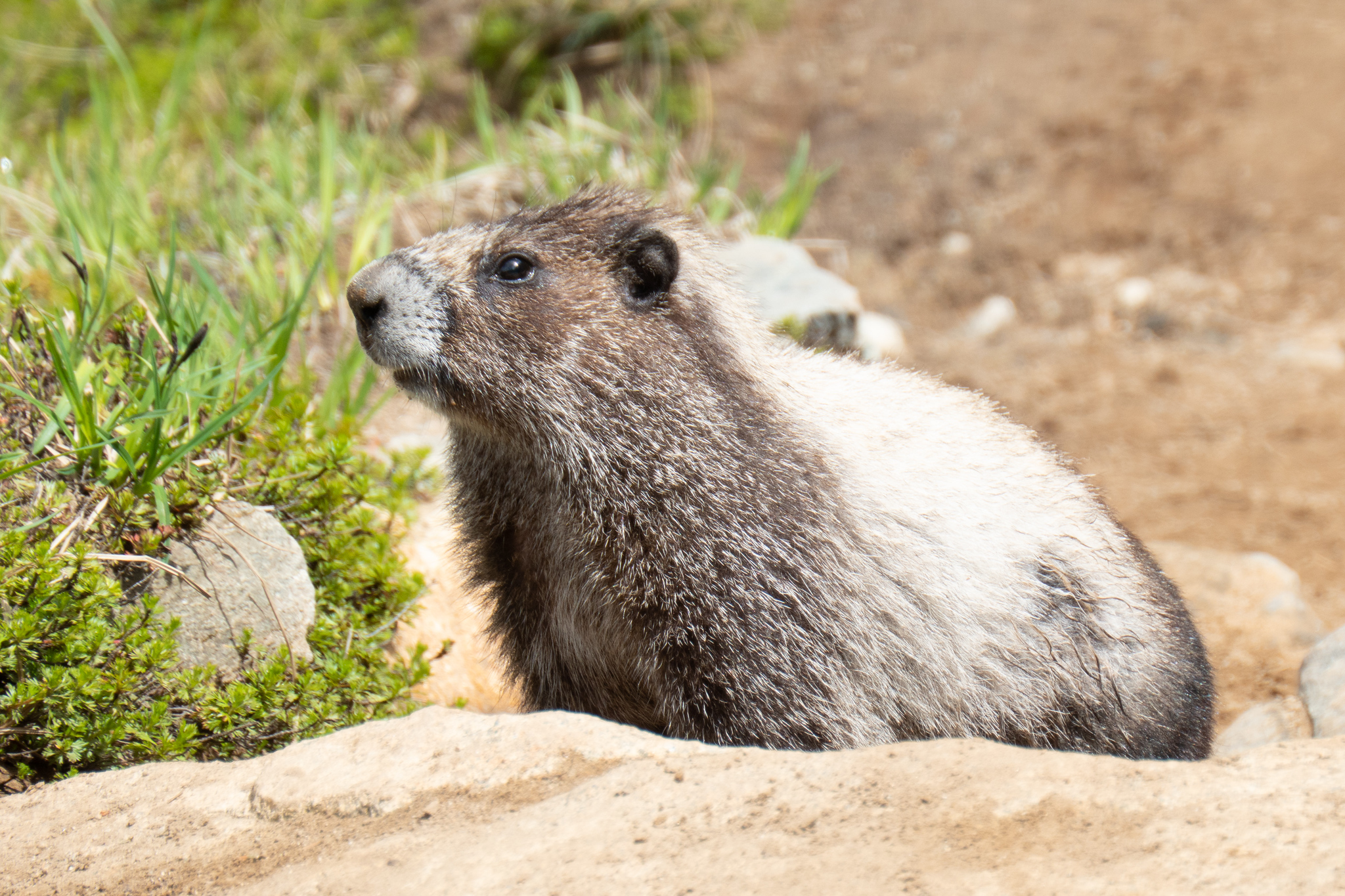 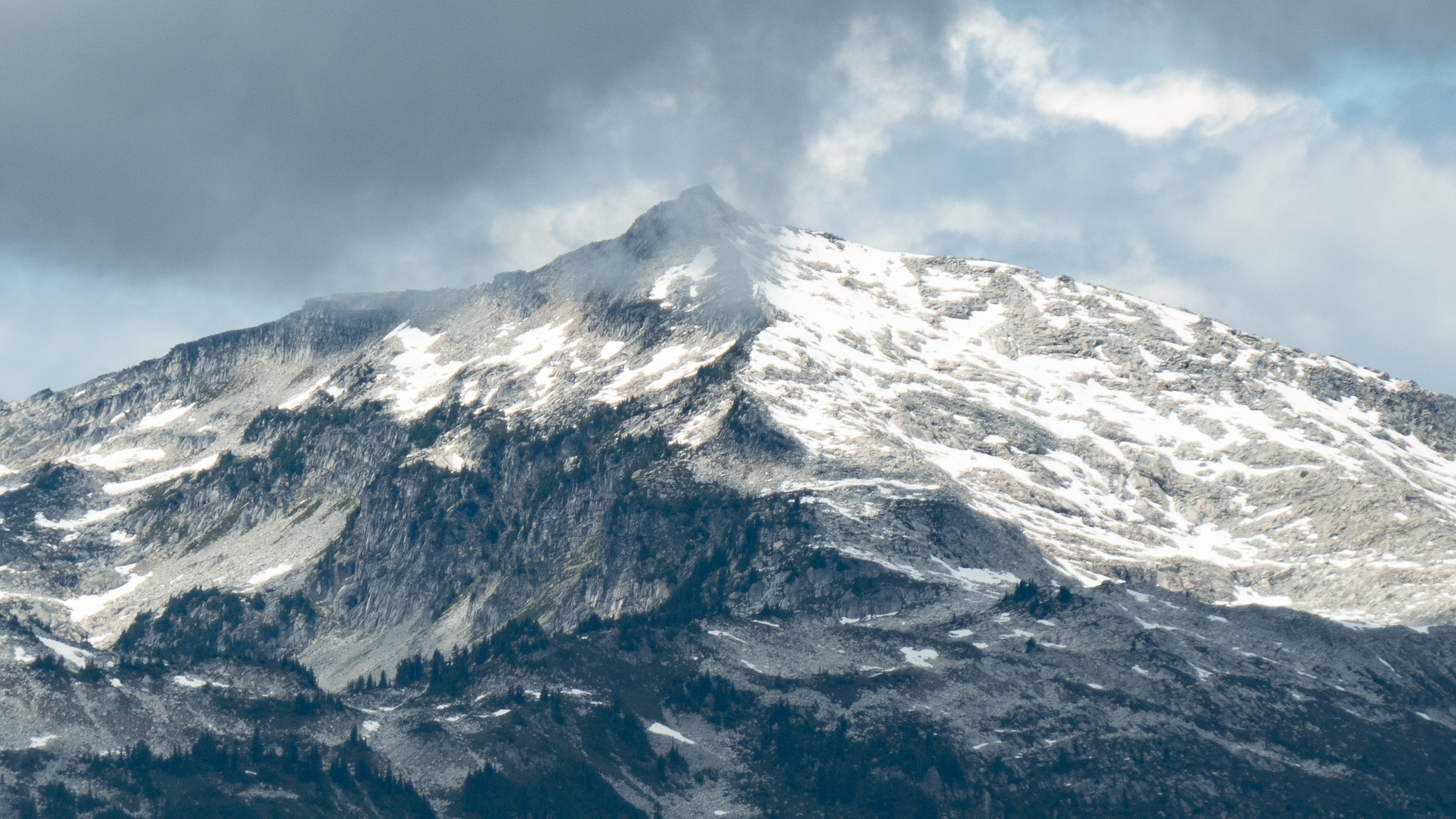 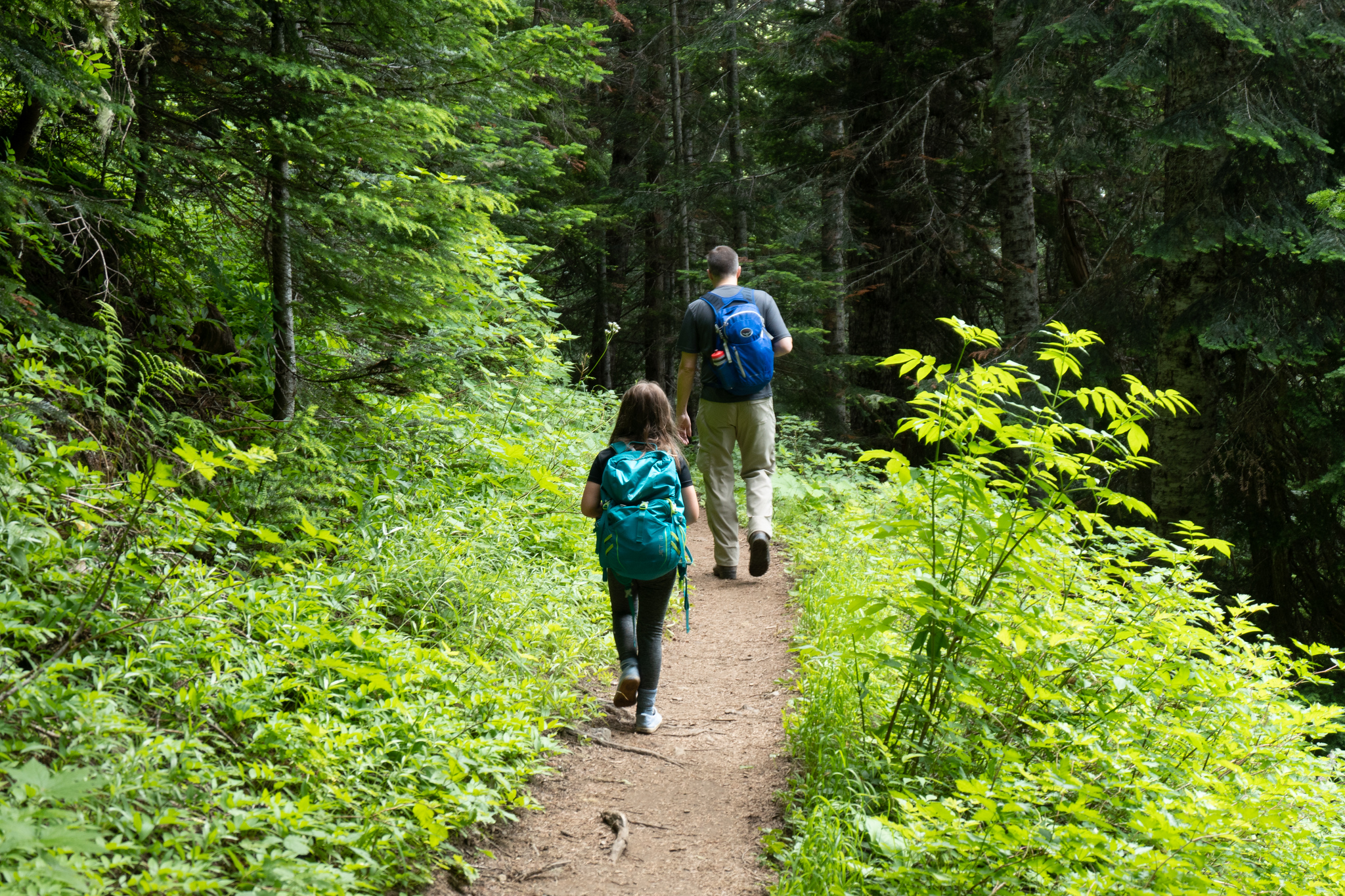 5 Replies to “The Way Through”