I recently spent a day going up, down and around Crystal Peak on foot and by bike (GPX file here). Not to be confused with nearby Crystal Mountain ski resort, Crystal Peak is a summit within Mount Rainier National Park. Apparently on a clear day you can see six volcanoes from the top (Rainier, Adams, St Helens, Hood, Baker, Glacier). The day I visited it was a bit hazy in the distance so I could “only” see Rainier, but that was more than enough!

In their trail description of Crystal Lakes, WTA recommends considering a car “shuffle” to connect the trail to Crystal Lake with the trail to Sourdough Gap. Rather than drive two cars all the way to Mt Rainier National Park, drive one car and use a bike to shuttle yourself! The bike segment is smooth, paved, and almost entirely downhill. Yes, this means you make up the gain on foot (5200 ft in 13+ miles) but the trail scenery is plenty distracting. 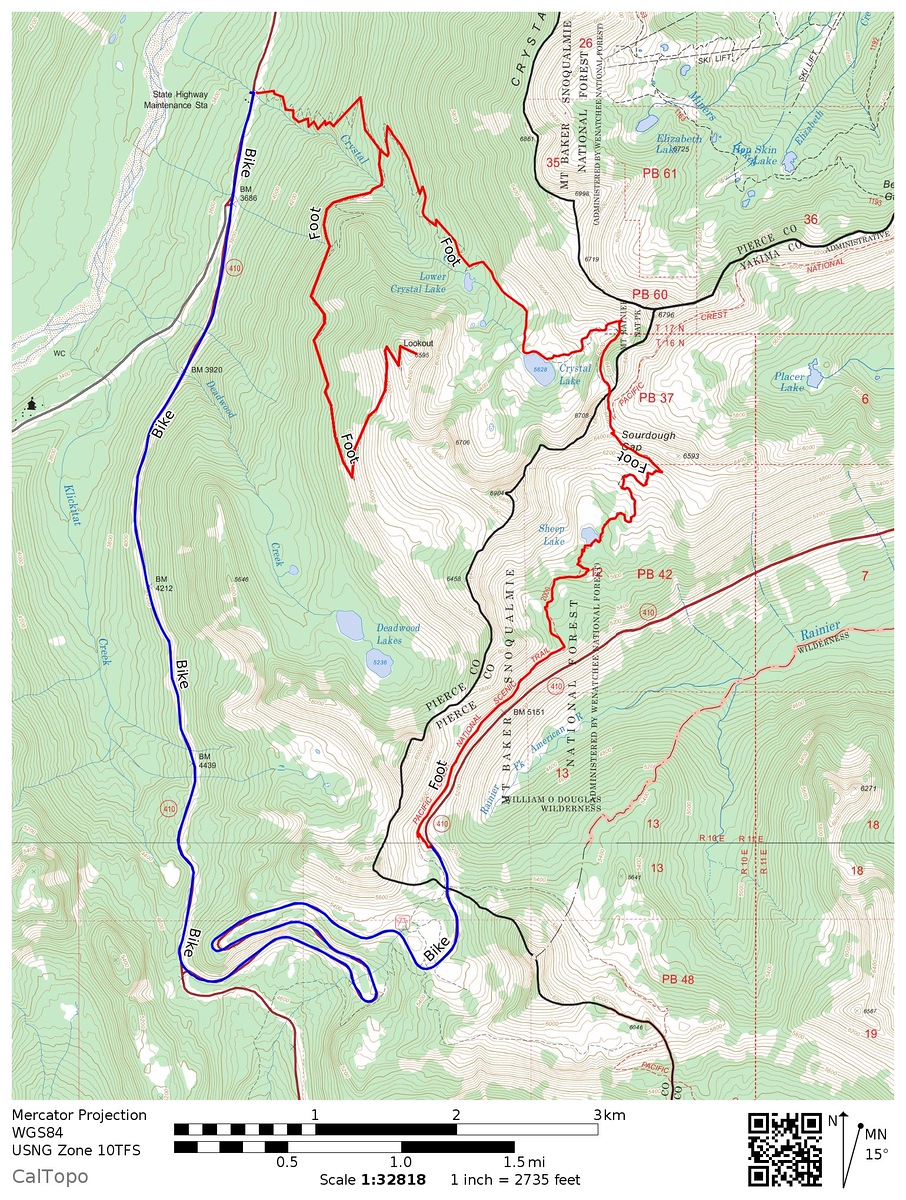 I started my day at Chinook Pass, and rode my bike down the winding paved descent to the Crystal Peak trailhead, swooping through the turns with a huge grin on my face. It was 8 am, and there was minimal traffic and maximal wheeeeeeeeeee. I hid my bike in the woods just before the Crystal Peak trailhead, locked it to a small tree, and hoped for the best (spoiler: it was still there when I came back, as it always has been so far).

I used panniers to carry my running gear on the bike, but you could easily skip the panniers and carry your stuff in a backpack instead, especially considering the bike ride is so short and fast.

Perma-grin for the entire descent!

After stashing my bike, I began the enjoyable hike up Crystal Peak. It’s straightforward and well-maintained, with only one intersection that is clearly marked. The trail to the left takes you to the lakes, and the trail to the right takes you to the top of Crystal Peak. I headed right, knowing I would be back down to visit the lakes afterwards.  The temps were moderate, the mountain was out, and I was so grateful to be outside, in the high country, on a perfect summer day. I even heard an elk bugling in the distance.
I only saw two other people as I climbed, which I thought was pretty good for a national park on a holiday weekend. There were also three people at the top. Everyone was friendly and courteous.

I took the trail to the right first, tagged the peak, then came back to this intersection and went to the lakes.

Beginning of the trail

Views along the way 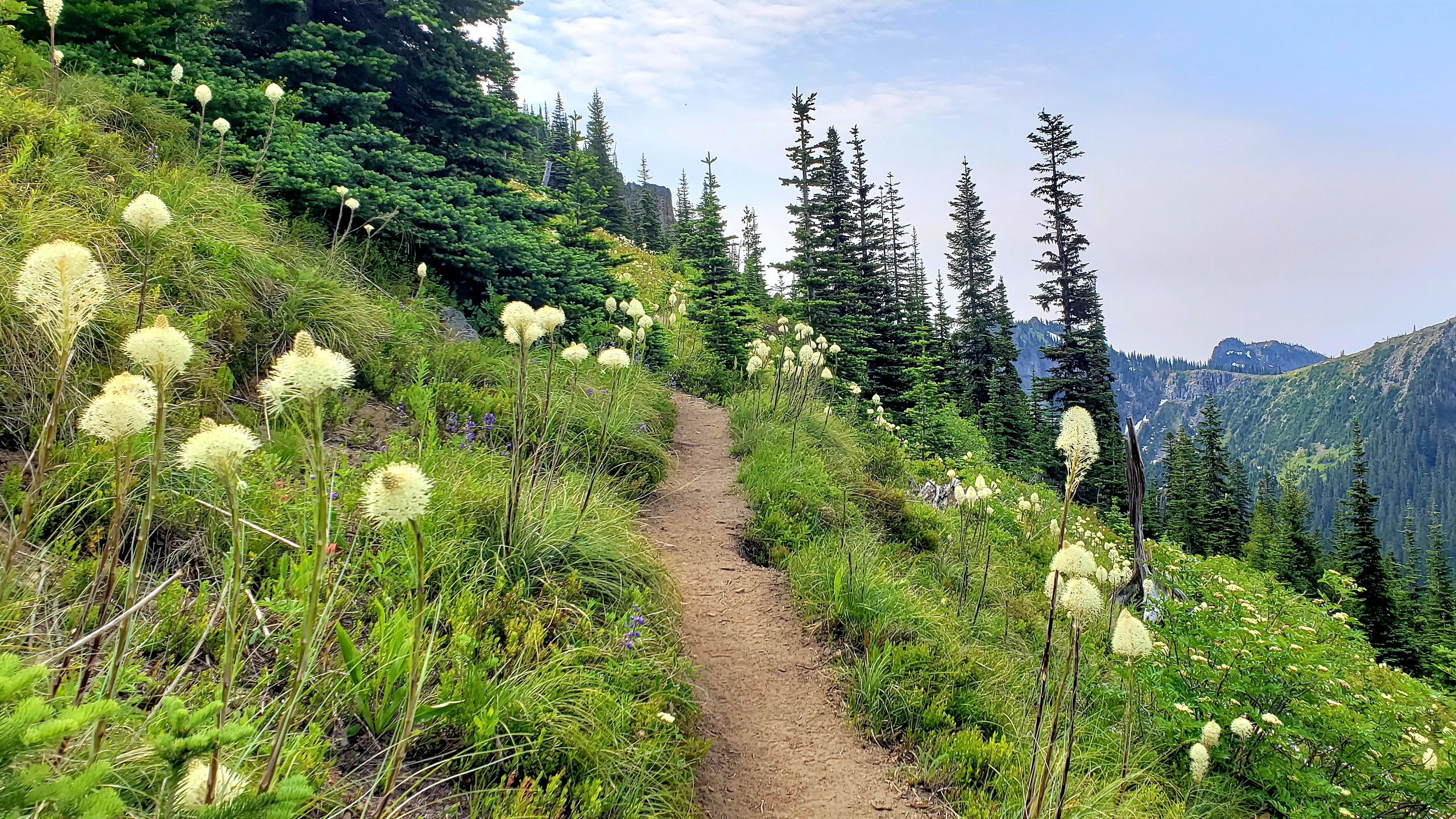 The trail isn’t known for big trees, but there were a few

Upper Crystal Lake, as seen from the top of Crystal Peak

After taking a boatload of pics, I jogged back down. The Crystal Peak trail is truly non-technical – smooth packed dirt, moderate grade in most parts, perfectly runnable. Fun times! Back at the peak/lake trail intersection, I took a right and headed for the lakes. I started to see more people along this stretch, but I still wouldn’t call the trail crowded.

Lower Crystal lake was quiet. The two campsites were both empty and no dayhikers were in sight. That said, there were a few mosquitoes, so I kept on trucking, reaching upper Crystal Lake shortly thereafter. Upper Crystal was more scenic than lower, with gorgeous views of the rugged basin in which it sits. It was also more crowded, with several groups dotting the shoreline. Even the mosquitoes seemed to prefer Upper Crystal Lake, as I was swarmed every time the wind stopped blowing for even a second.

I made my way around the north end of the lake and spotted a trail coming down from the basin above. This is an unmarked intersection and might confuse some folks, because you are trying to reach the ridgeline straight ahead of you, yet the trail veers off to the left. If you look at a map, you’ll see that the route eventually winds back to the ridgeline, and you are indeed on the right track.

The climb from Upper Crystal Lake offered great views, with Rainier playing peekaboo in the clouds behind the lake. I met a few hikers who were disappointed that they didn’t get a clear view of Rainier, which made me even more grateful for the clear skies earlier in the day. That said, whenever Rainier is hiding, I’m always struck by Little Tahoma. Such a cool peak – put it anywhere else in the world and calling it “little” would be laughable. Talk about living in the shadow of your big sis!

Upper Crystal Lake with Rainer in the background. With the clouds gone, Little Tahoma almost blends into Rainier on the lower left flank of the mountain.

I reached the top of the basin and then dropped down a short distance to the PCT, which took me to Sourdough Gap and then down to Sheep Lake, and finally back to the trailhead at Chinook Pass, where my car was waiting for me. The views along this section of the trail were still gorgeous, although not quite as amazing as they were from the Crystal Lakes basin. The trail got more and more crowded as I descended, and Chinook Pass was bustling with people. Solitude is lovely, but I didn’t expect it here, and I was happy to share the trail with so many people from all walks of life enjoying their public lands on a gorgeous day.

Near the top of Crystal Lakes basin

The PCT winding towards Sourdough Gap

Starting the descent to Sheep Lake

Sheep Lake in the bowl below – almost back to the car