My original plan for this trip was to do a human-powered traverse of the Olympic Wilderness coast: walk from Shi Shi Beach to Oil City, using a packraft to cross the Quileute River, and then ride back up the coast via gravel roads to my car. To the best of my knowledge, no one has ever ridden off-pavement from Oil City to Shi Shi Beach, so I was particularly excited about that part of the route.

Sunset the night before I began.

Unfortunately, things didn’t go quite as planned. It wasn’t any one big problem, just a lot of little things that snowballed. It started with getting stuck at a headland while I waited for the water to recede. (According to my map and tide table, the headland should’ve been passable, but it wasn’t. A good reminder that tide predictions are just that: predictions). This put me a couple hours behind schedule, which meant I had to wait overnight since I didn’t want to paddle across the Quileute in the dark, which in turn threw a wrench in the rest of my tightly planned schedule, and ultimately meant I ran out of time and didn’t complete the route.

I think the best way to sum it up is that I need to change my approach.
While it is certainly possible to walk/jog the entire Olympic Coast in 24-48 hrs, it’s a different matter to do that while carrying a boat, and then turn around and ride a mountain bike back to your car, all in one push. Not only is it tough on the legs, but it’s more logistically challenging than you might think, especially on a relatively tight schedule. This might seem obvious to many people reading this, but apparently I needed to learn it the hard way. 🙂

In addition, as much as I love packrafting and am always looking for an excuse to use my boat, I just don’t think it’s worth it to carry a packraft on this route. Now that I’ve walked the entire coast (albeit not all at once) I can confirm that the Quileute is really the only crossing where the boat would be helpful. This means you’re carrying a boat for 50+ miles on foot, and 70+ miles by bike, just to paddle approximately 1/2 mile across a river. Not worth it, in my opinion. I’m starting to think swimming across the Quileute might be the best option. Or just walking the road. Bleh.

Although it’s always a bummer to fail at something, I’m trying to view this with a “growth mindset.” I haven’t cracked the code on completing a human-powered traverse of the Oly Coast yet. This attempt was a good reminder that multi-day trips involving multiple modes of human-powered transportation have a lot of moving parts, and you need to give yourself even more wiggle room than usual for unexpected glitches.

See below for trail and road conditions.

Point of the Arches 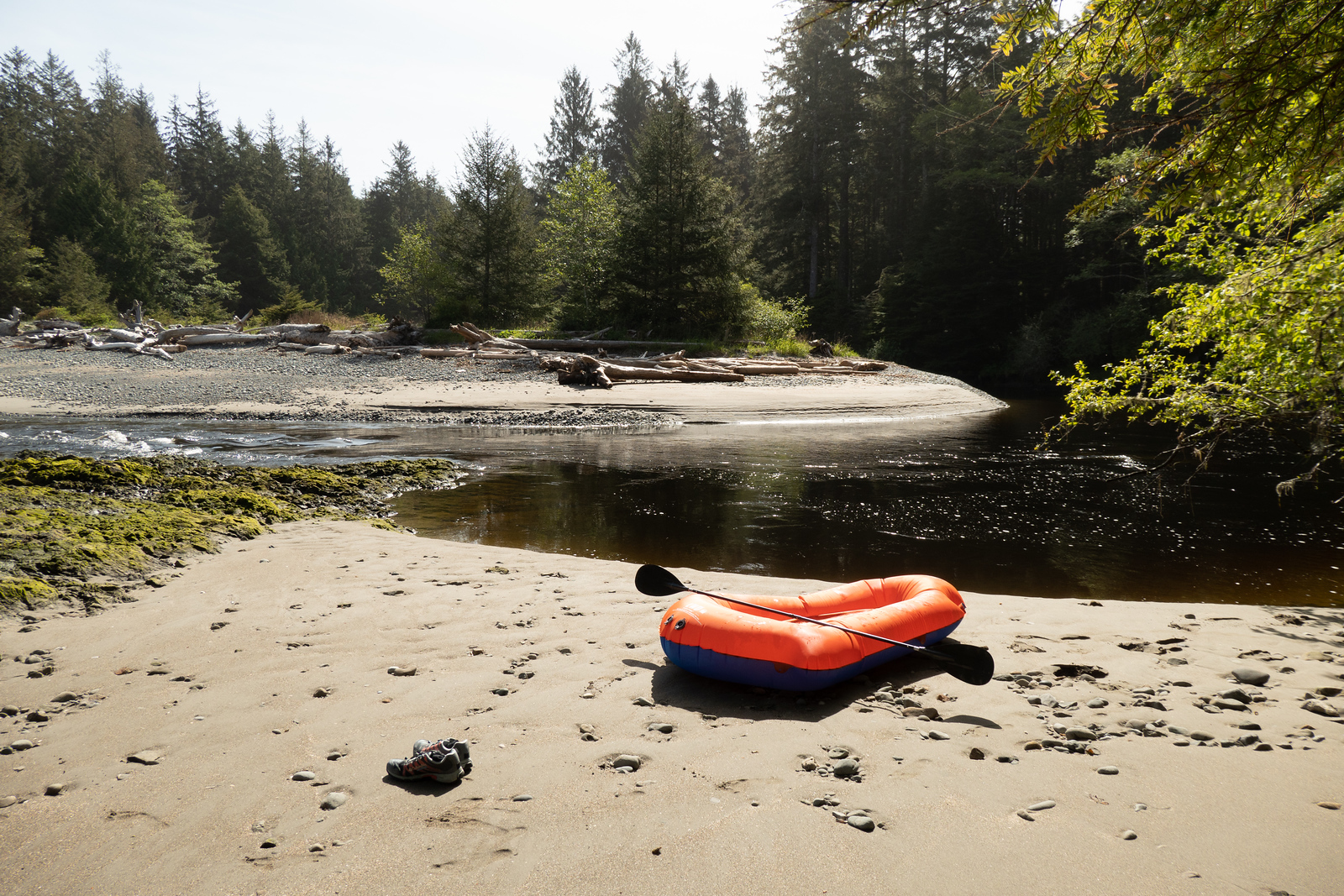 I left my Alpacka packraft home, and instead carried this lightweight boat, which I used to paddle across the Ozette. (You don’t NEED a boat to get across the Ozette, but since I was carrying it I figured I might as well use it.)

Trail conditions: During this attempt I walked the northern Wilderness Coast, from Shi Shi to Rialto Beach. This section of the coast is in pretty good shape, relatively speaking. Of course, much of it is not maintained trail, but simply follows the shoreline, sometimes on hard-packed sand, sometimes on slick algae-covered rocks, and sometimes on steep, eroding, overland trails. My best advice is to move quickly when you can (i.e., on hard-packed sand) because there are plenty of sections that will force you to take it slow. Also, pack as lightly as possible so that you can stay nimble and more easily navigate the rougher sections.

Road conditions: During this attempt I rode my bike from Oil City to La Push. During a previous trip I’ve also ridden from La Push to just shy of Lake Ozette, so at this point I can confirm that it’s possible to ride off-pavement from Oil City to just south of Lake Ozette. I created a map that shows the specific gravel roads I used, which you can find here. All of the roads were in good condition. The groads from Oil City to La Push were surprisingly quiet, and I didn’t see any other people or vehicles until I was just a couple miles from La Push. In contrast, the groads from La Push to Ozette were surprisingly busy, with a fair amount of recreational and commercial traffic. I rode both routes on sunny weekdays.

I stashed my bike in the woods near the Oil City trailhead, and no one bothered it.

In summary, while it wasn’t the adventure I had planned, it was still a fun adventure! I’m looking forward to trying again – next time without a boat, and with different overnight gear and more time to spare, so that it’s a non-issue to stay out longer when things go awry.