For Mother’s Day this year, Tom and Rowan and I drove out to the Olympic Coast and enjoyed an amazing day in the sunshine, playing on the beach and relaxing at Quileute Oceanside Resort. Then, on Monday morning, they slept in while I woke up early and biked from La Push to Kingston via the Olympic Discovery Trail. It was a fantastic Mother’s Day weekend: a day full of family time, followed by a day to myself on my bike.

Hanging out at the cabin

Heading down to the beach

Other families around = instant playmates for Rowan

Overall, the Olympic Discovery Trail is in great shape. I’d read some previous trip reports that suggested there were some sketchy forest service roads and other difficult sections along the ODT. In hindsight, my guess is that those reports were actually referring to the Olympic Adventure Route (which also looks incredibly fun, but is not the ODT :).

I started in La Push, gently climbing out of the fog in the early morning light on Hwy 110. Traffic on a Monday morning was moderate, and as long as I stuck to the shoulder of the road I felt safe. Hwy 101 was busier, but soon enough I was turning onto Mary Clark Rd, riding along a mostly empty chipseal road through the trees. Just as I was starting to wonder if there was actually any trail to the Olympic Discovery Trail, I turned onto the first section of paved separated trail, which was smooth sailing and quite lovely.

Getting ready to head out on Monday morning 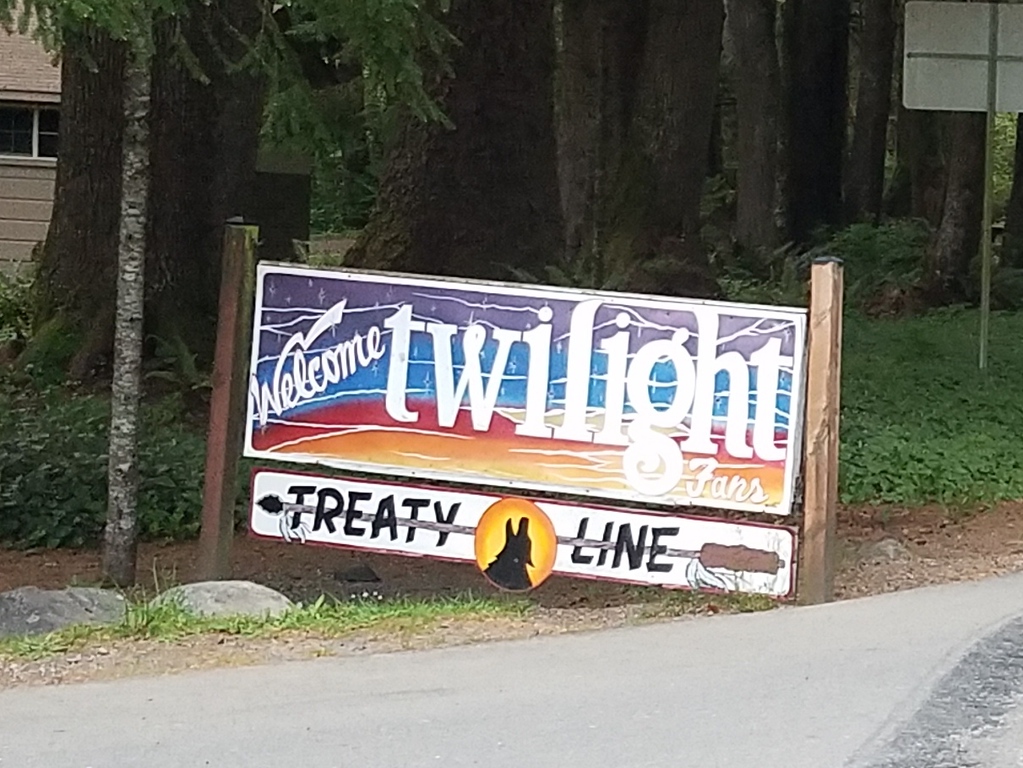 It’s been over 10 years since the first Twilight book was published. I’m curious if locals are still glad for Twilight tourists, or ready to be done with it.

One of many rivers crossed by the ODT

The unpaved sections of the ODT are short enough (probably 3-4 miles total, at most) that you could just hike-a-bike through all of it if you felt the need. The bulk of the non-paved riding is along the Spruce Railroad Trail on the northeast end of Crescent Lake, and there is also a very short section of gravel road in between Port Angeles and Sequim.

If you take the Hwy 101 detour, the only off-pavement riding you’ll do is that small stretch of gravel road between Port Angeles and Sequim, which is less than 1 mile long, and manageable on a road bike (worst-case, you walk).
An important note about the Hwy 101 detour – there are no detour signs, so you need to pay attention and make sure you re-route onto Hwy 101 before you get too far across Lake Crescent. Otherwise, you will ride along the north side of Lake Crescent, hit the trail closure, and then be forced to backtrack for miles to get back on Hwy 101.

Unfortunately, that section along Crescent Lake includes some of the most scenic parts of the ODT. In addition, there is currently a lot of road construction along the Hwy 101 re-route around Lake Crescent. It will be wonderful when the Spruce Railroad Trail officially re-opens. If you’re not in any rush, it might be worth waiting until that section is open before doing the ODT.

This is the gravel section between Port Angeles and Sequim

After getting around Lake Crescent, there is a long section of ODT that is paved trail, taking you right along the waterfront through Port Angeles and then winding through quiet rural country on the way to Sequim.

I should clarify that I didn’t complete the entire ODT – approx 2 miles east of Discovery Bay, I cut southeast towards Kingston to catch a ferry home, skipping the last 10 miles of the ODT along Hwy 20 into Port Townsend (although adding 20 miles to my day by re-routing to Kingston). The ODT website warns that this section of Hwy 20 has no shoulders and heavy traffic, and is mostly uphill if you’re heading eastbound. I found all of this to be true. I spent 2 miles on Hwy 20 east of Discover Bay, and that was plenty for me. In fact, I’d encourage the ODT folks to consider re-routing the ODT to end in Kingston, rather than Port Townsend. If you finish in Kingston, you tackle rural hilly roads, pedal across the Hood Canal Bridge, ride through scenic Port Gamble, and then ride on wide shoulders into the Kingston Ferry Terminal. IMPORTANT: Leave time to buy a crepe before you get on the ferry!
My route is shown below, and you can find an interactive map here.

The Ride With GPS maps posted on the ODT website were extremely helpful, and I highly recommend using them for navigation. The maps/cue sheet assume you are headed westbound, but were easy enough to follow heading the other direction – just follow the blue line in reverse. On the day that I rode the ODT, there was a strong and steady wind blowing from the west, which made for a sweet tailwind and some easy riding as I pedaled along eastbound.

In summary, this is a great route. Easily passable with a road bike, especially if you take Hwy 101 around Crescent Lake. That said, if I did it again, I’d still take my Diverge (allroad), mainly because the highway shoulders have a fair amount of gravel and debris and it was nice to just ride right over that stuff.
If you want to experience the scenic Spruce Railroad Trail, be prepared for some backtracking or wait until construction is finished.