Last time I was in Darrington, I stopped by the Darrington Ranger Station to ask when the Mountain Loop Highway might open (answer: not until mid-May at earliest). While I was there, a couple guys came in with a bunch of photos and a detailed description of current conditions on the Suiattle River road and trail.
The ranger was clearly very grateful for the info, and ooh’ed and ahh’ed over their pictures. It got me thinking… I ride my bike on a lot of gravel forest service roads around Darrington… maybe I could help the Forest Service by riding roads in unknown condition and then reporting back?

So this past Monday I called the ranger station and determined that no one had been up White Chuck Rd yet this spring. That’s mainly because there is a known wash-out at mile 4 that makes it inaccessible to cars. Car-free gravel-grinding, on a new-to-me road, PLUS I get to make myself useful? Yes please!
I parked at the Beaver Lake trailhead, crossed the Mountain Loop Highway, and started riding up White Chuck Rd/FS 23. (All mileage reported in this trip report is from the the start of FS 23.) Sure enough, at 4 miles I came to the previously reported road washout. It was impassable for cars, but very easy to ride around on my bike. 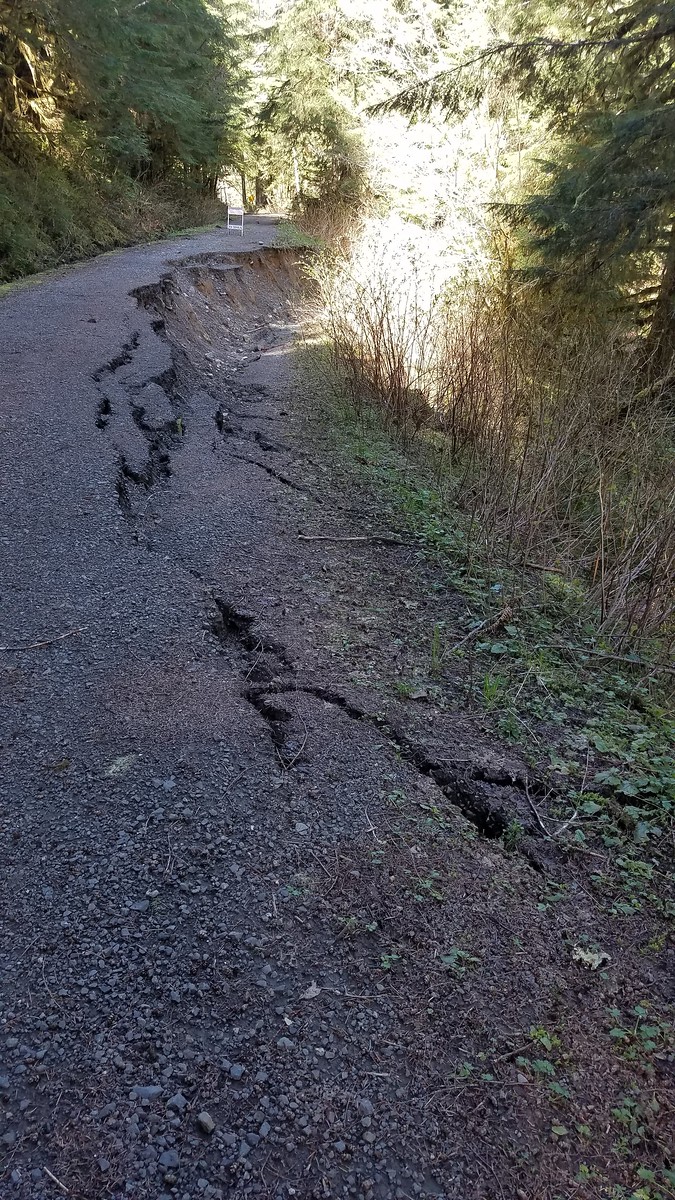 After the washout at 4 miles, I cruised along the road, enjoying good quality gravel with a few mud patches here and there. Eventually I reached the turn-off for Rat Trap Pass (FS 27). The road and the surrounding forest were still 100% snow-free, and it was a gorgeous sunny day in the woods. I decided to ride up just a little farther… 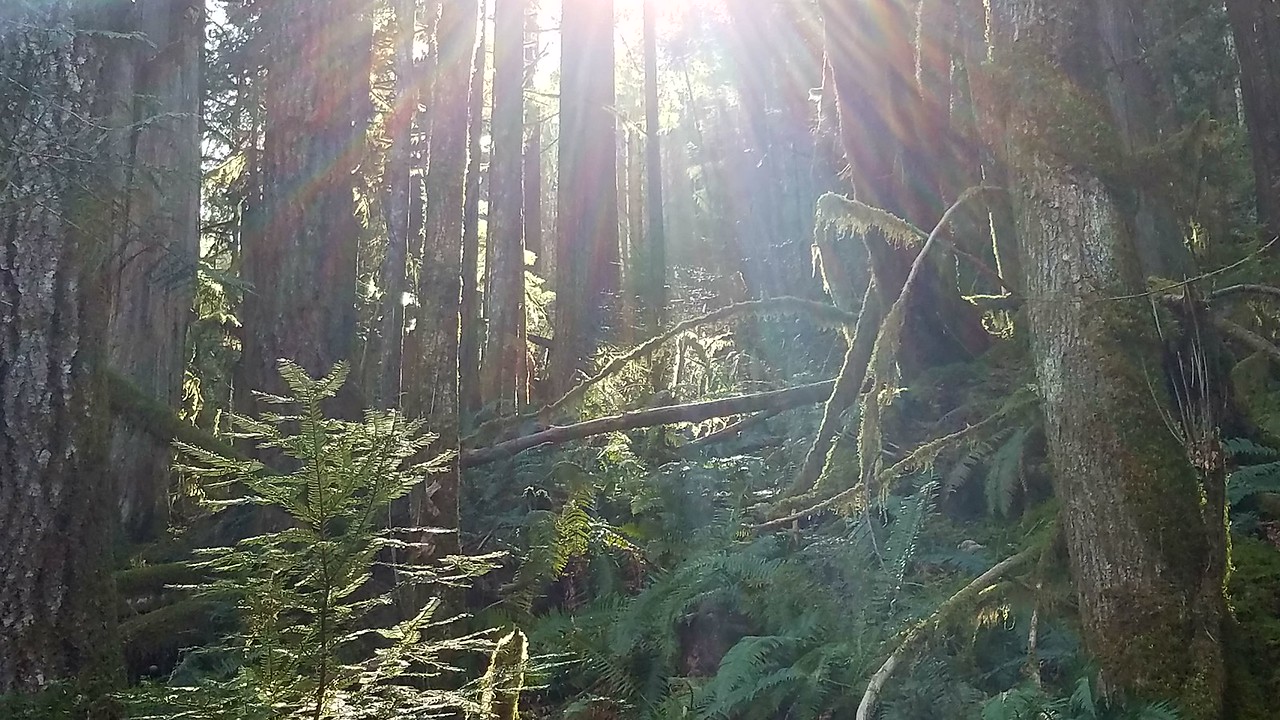 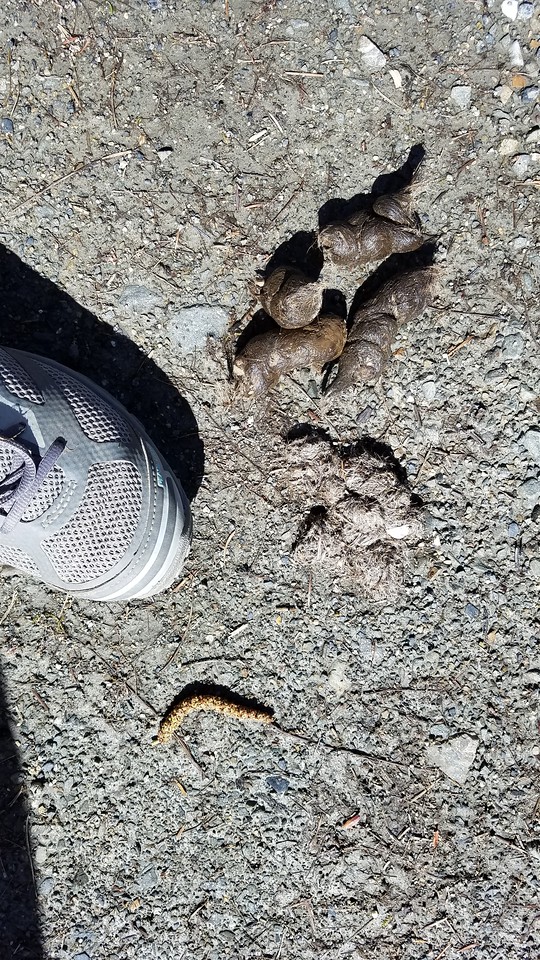 Lots of cat scat along the road

At mile 7, around 2000 ft, I encountered a big tree across the road. Again, impassable for cars, but easy enough to lift my bike over it and continue climbing. 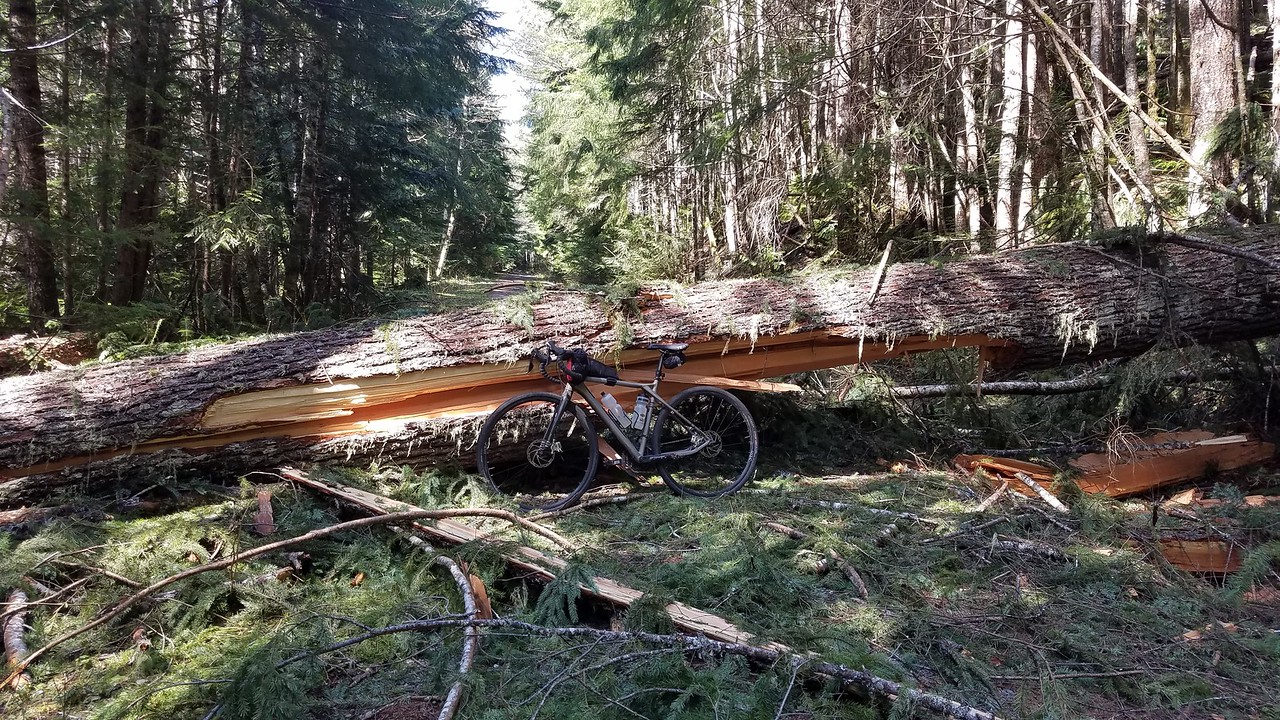 The gravel became coarser, the road steeper, but I still hadn’t hit snow. I told myself I would turn around when I did. Finally, snow appeared as I approached the Meadow Mountain trailhead at around 2600 ft, but it was still very patchy and easy to negotiate. I kept on climbing. 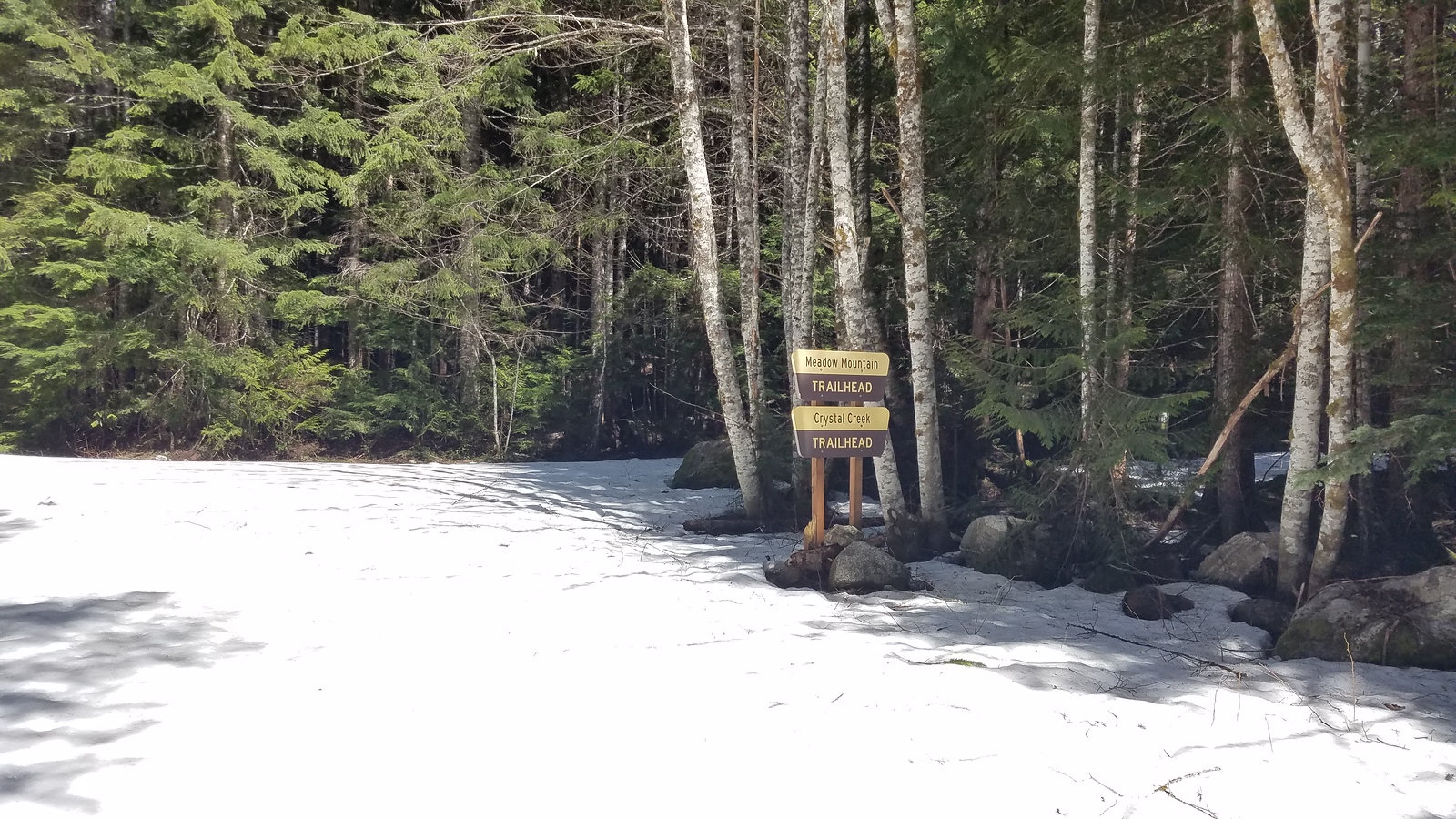 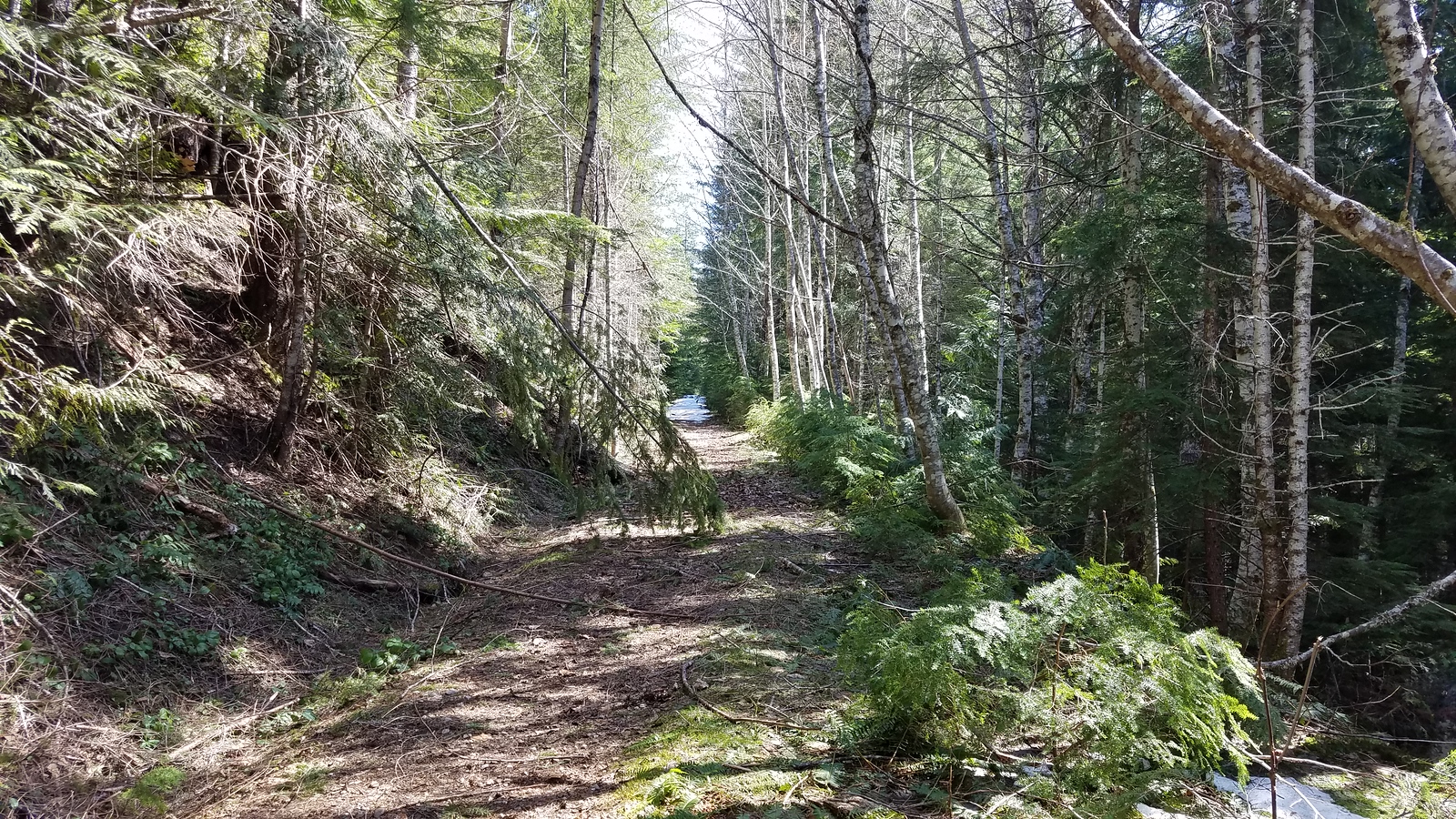 The start of Meadow Mountain trail

Just pass the Meadow Mountain trailhead, on a snow-free stretch of road around mile 9, I reached a large rock slide over the road. I stopped and pondered. I had seen pictures of other people carrying their bikes over slides bigger than this one. Loaded touring bikes, no less! My bike was probably half the weight of a fully loaded touring bike. I decided the slide was not a good excuse to turn around, so I clambered over it, pushing and pulling my poor bike along with me. 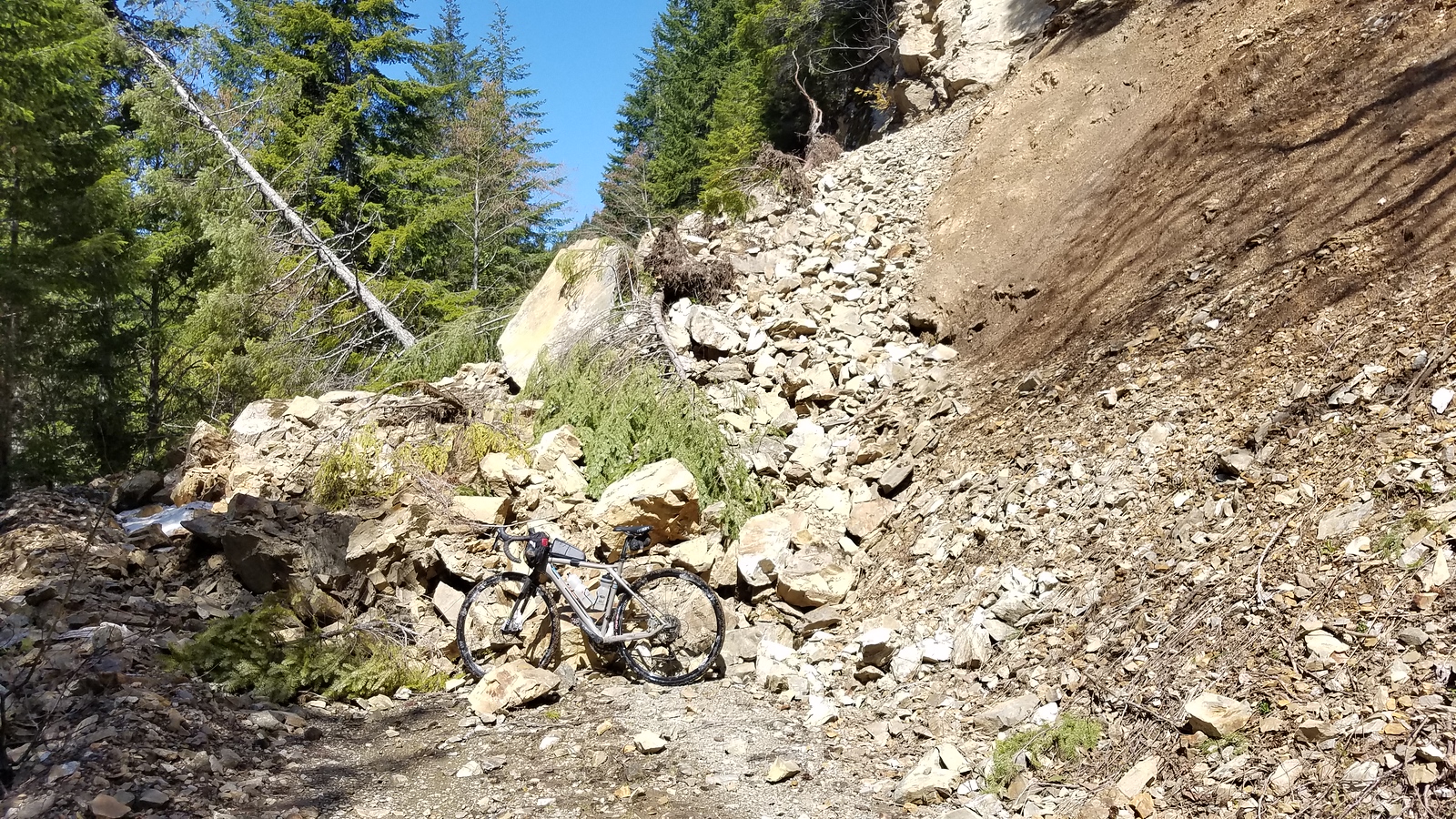 I looked at a map. I was now only a mile or so from Rat Trap Pass, and still no significant snow! Plus, I had absolutely zero desire to climb back over that rock slide behind me. The pile of rocks and trees had felt precarious, and I really don’t want to break another bone or be forced to saw off my arm in a 127-hours moment.

At that point I decided I was committed to going up over and Rat Trap Pass. I was at an elevation of approximately 2800 ft and there was still plenty of bare ground. How deep could it possibly be up at the pass, at 3000 ft elevation? (Answer: Pretty deep.)

Less than 1/2 mile later, I was pushing my bike through 1-1.5 ft of snow, post-holing with every step. At around mile 10, I came across a second wash-out. This one also looked impassable to cars, but I was able to creep around it with my bike on the uphill side. Again I considered turning around. But I was so close to the pass… and it would be downhill from there, which surely would be easier than uphill, so I kept on going. 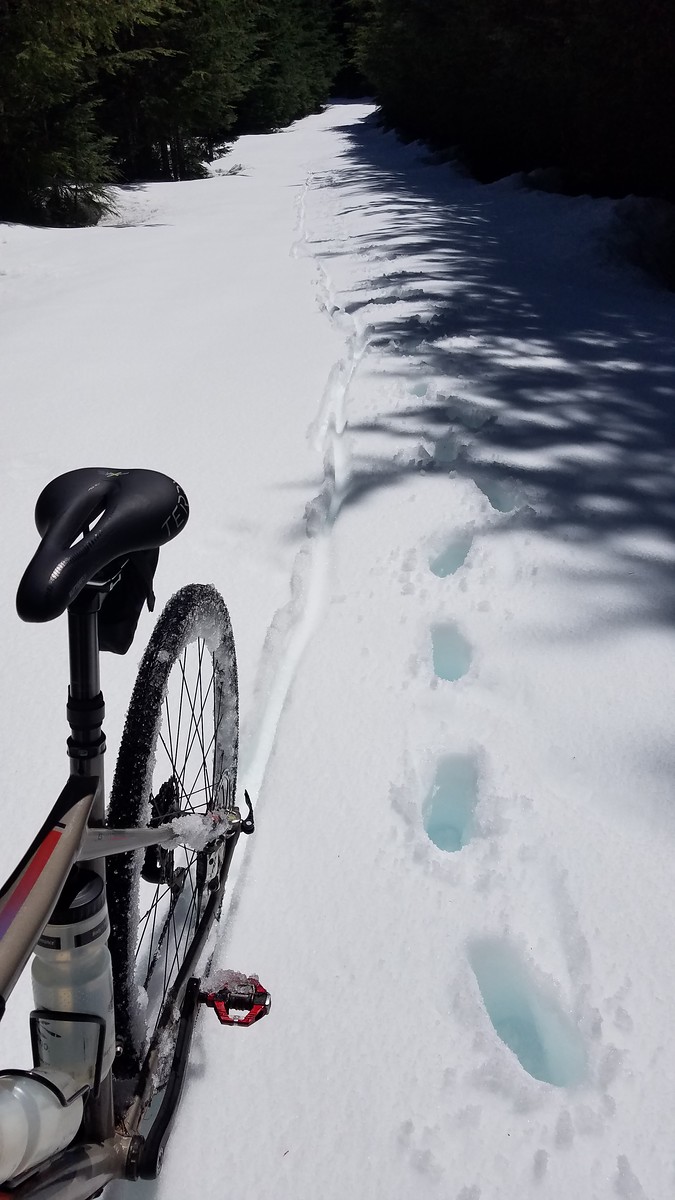 It took me an astoundingly long time to cover the last 1/2 mile to the pass, but I finally got there. There’s still at least 3-4 ft of snow at the pass, topped with a breakable rain crust that holds just long enough for you to believe that this time it will hold your weight… and then you punch through, rubbing your ankles raw against the icy crust as you go. Definitely type 2 fun! 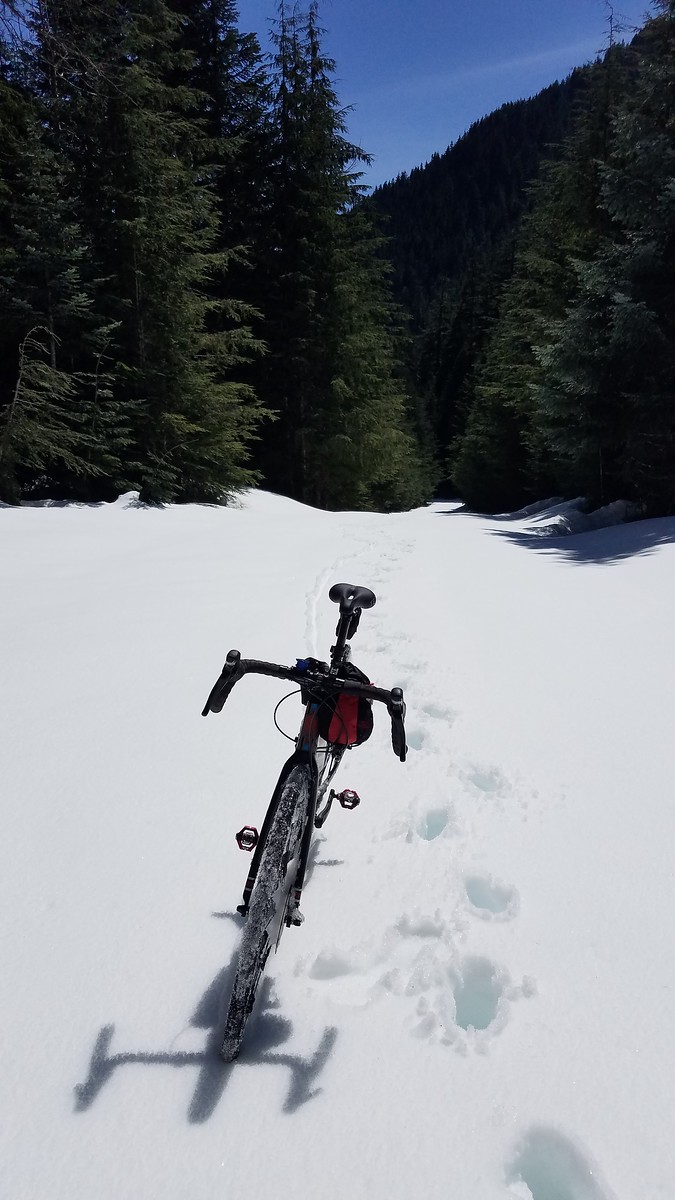 Luckily there were some gorgeous views of White Chuck to take my mind off the slog. And once I made it up and over Rat Trap Pass, my pace did pick up a bit. Unfortunately, but unsurprisingly, the snow is lingering a bit lower on the north side of Rat Trap Pass, and I didn’t hit clear roads on that side until around 2200 ft. By that point I was pretty much done with postholing through soft snow while dragging my bike next to me. I don’t think I’ve ever been so excited to see bare ground! 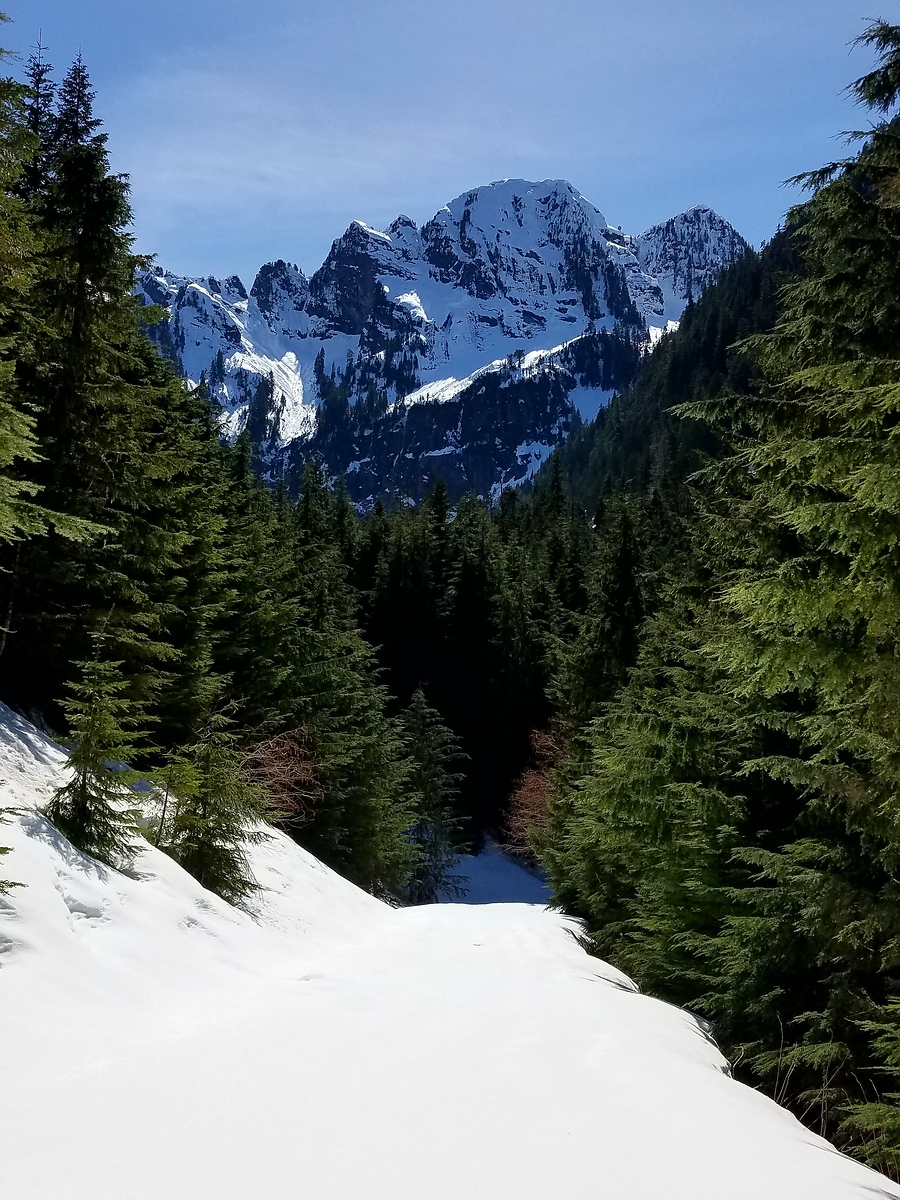 North side of White Chuck Mountain

In general, the north side of Rat Trap Pass is in pretty good condition. A couple trees down, but only one that seems to be acting as a real barrier to vehicles, at mile 14 (again, measured from where FS23 starts at the Mountain Loop Hwy).

The rest of the ride was largely uneventful. The last few miles of gravel road (FS25) on the north side are in lovely shape, making for some fast descending. Suiattle River Rd is smooth and paved. SR530 into Darrington from the Suiattle had a fair amount of traffic, particularly since it was “rush hour,” but everyone was super courteous and gave me plenty of room. I rolled into Darrington and then pedaled up the Mountain Loop Highway (narrow shoulders, but very few cars on a Monday evening) back to my car. 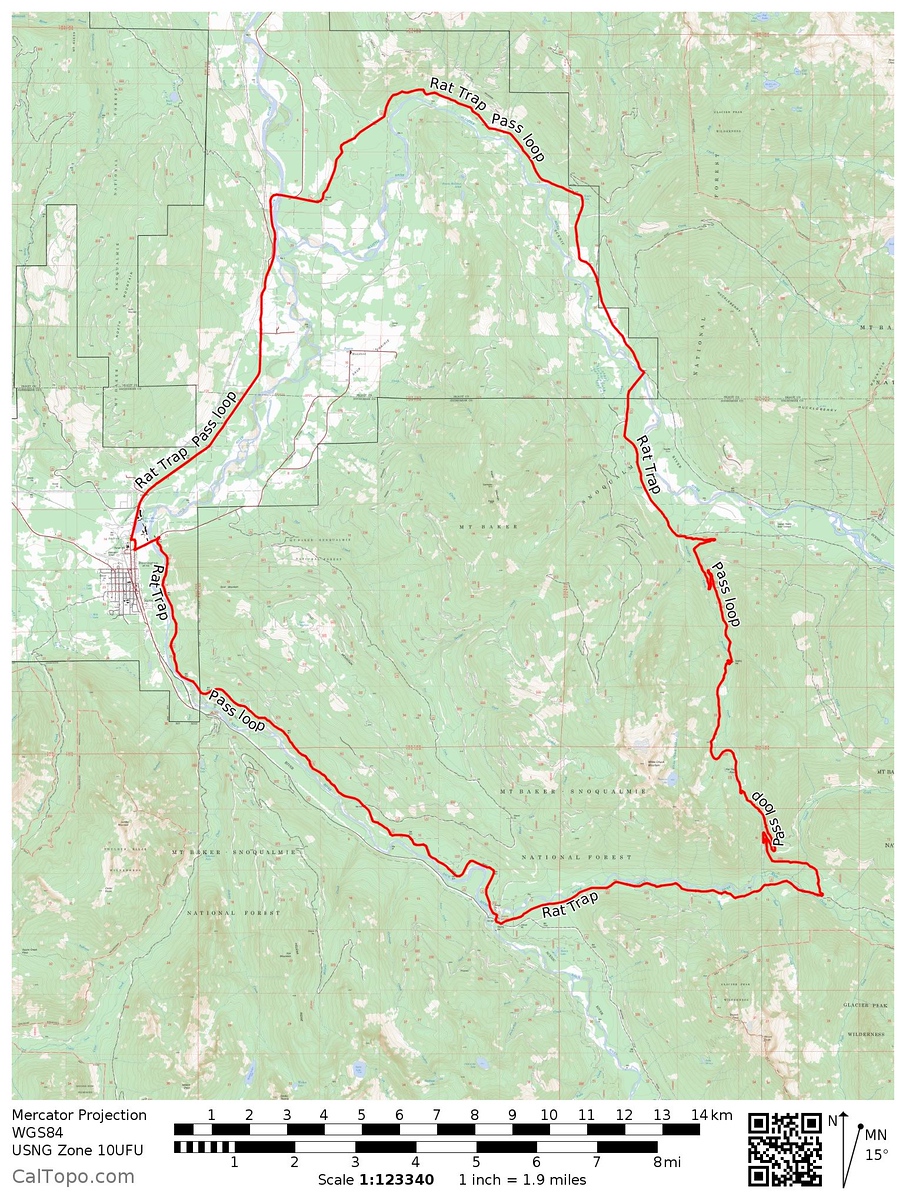 Overall, this is a route I would highly recommend on a gravel bike… once the snow melts! Interactive map here.