One of my favorite things about Washington is the diversity of the landscape. People who don’t live here might assume it’s all big green trees and moss and rain – and in Western Washington, for parts of the year, this is the case. But all you have to do is drive 1-2 hours east over the Cascade Crest, to the land of coulees and shrub steppe, and it’s as though you’re in a different world.

Last weekend I headed over to coulee country to do some early-season riding. Many of the more remote roads in Western WA are still buried under slushy snow, but just outside of Vantage and Ephrata, the roads and trails are in great condition.

I left Seattle on a Sunday mid-day, arriving in Frenchman Coulee around 3 pm. Frenchman Coulee is a climbing area with some reasonably nice free dispersed camping. (No cost to spend the night, but a Discovery Pass is required.) On the weekends, it is often full of climbers and it can be tough to find a place to camp. However, by Sunday afternoon the place was starting to empty out, and I easily found a somewhat secluded site to park my van for the evening. Although the road is paved all the way to Frenchman Coulee, the camping area itself is pretty rough, and I was glad for moderately high clearance.

I parked my van and unloaded my bike. The clocks had just jumped ahead for Daylight Saving time, so even though I was starting at close to 4 pm, I had a full three hours until sunset. My original plan was to do this route, but as I started to drop down into the coulee, I met a guy on a plus bike hiking back up. He said that the sand in the bottom of the coulee was barely rideable with his fatter tires, and would probably be a no-go for me, considering I was on my gravel bike. I decided to heed his advice, but in hindsight, I wish I had gone to see for myself. Later in the afternoon I ended up approaching from the other direction, and although there is definitely some deep sand down there, it only lasts for a mile or so, and I probably could’ve just walked through it. 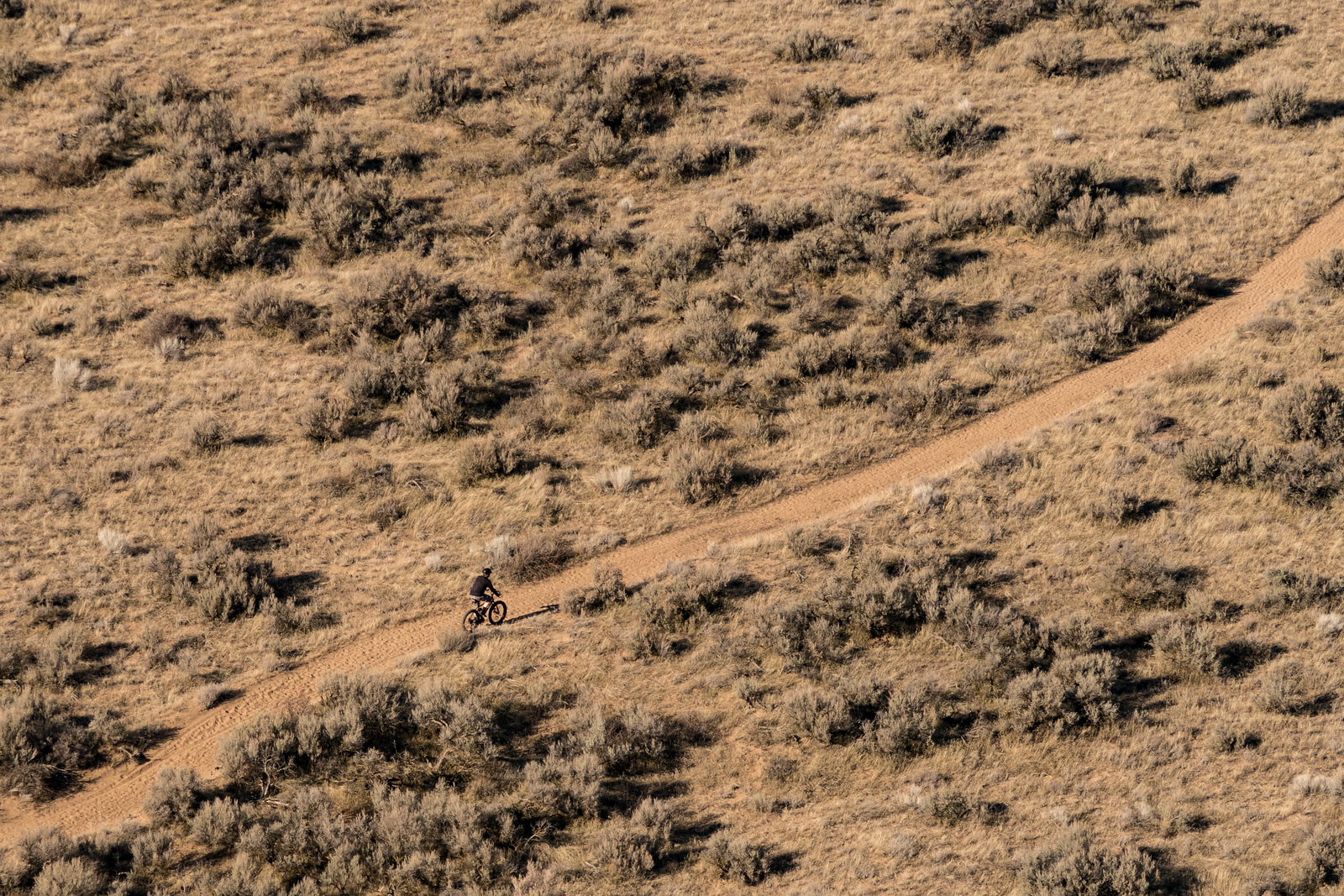 After deciding not to do the original loop, I rode around on some of the dirt roads up on top of the Coulee and then descended to the bottom via the old Vantage Highway, accessing the Coulee from the west end. The first mile or so on the west end was rough and rocky but passable on my gravel bike, and then came the aforementioned sand. Last but not least, I took the Old Vantage Highway all the way down to the Columbia River and finished the ride with a climb back to my campsite. It was a great time to reach the river, just as the sun was starting to drop below the golden hills.

In total, it was only about 15 miles of riding on Sunday afternoon, but it was scenic and sunny and warm, and a great way to get a sense of the area. I’m looking forward to coming back on my fatbike with the tires aired down and attempt to ride some of the sandier stuff. That said, an MTB or gravel bike would also work, especially if you’re willing to do a little hiking.

After riding, I went back to my campsite, heated up some dinner, and headed to bed. By 8:30 p.m. on that Sunday night, the camping area was about half-full and peacefully quiet. The next morning I woke up early and had oatmeal and coffee while staring at the stars. (Side note: I am never drinking Via again. It is 100% worth the weight to carry a lightweight brewing cone and do a pour-over. Especially when car-camping. 🙂

The plan for Monday was to ride the Vicious Cycles Ephrata Gran Fondo course. The official event had just been held the day before, so I knew the course would be good to go. I felt a little bad about ghosting the route (i.e., riding the course for free, the day after the official event) but in my defense the Gran Fondo was sold out, so even if I had wanted to register, there weren’t any spots available. And the truth is, I’m kind of like a three-year-old in that I generally like to “do it self” and ride routes self-supported, rather than relying on aid stations. That said, the winds are fierce in that part of the state, and the day I rode was no exception. There were plenty of times when I would’ve gladly joined a paceline.

I won’t lie, the first 15 miles of the route had me questioning my life decisions. I just kept telling myself “It can’t be ALL uphill, into a headwind, on gravel.” And thank goodness, ultimately it wasn’t. Soon enough I began the incredibly fun descent down Baird Springs Road, flying down empty gravel roads with awesome views of the Cascades on the horizon.

The course designers did a great job with this route, and it definitely kept me engaged. For example, rather than spend too much time on busy Hwy 28, they briefly re-route you onto an abandoned, sand-covered road.  I was actually glad for a chance to get out of the saddle and walk for a bit, and it really was a treat not to be on the highway.

After Hwy 28, you turn onto Palisades Rd, which is a part of the course I had been looking forward to all day. My friend Molly Linville owns a ranch on Palisades Rd, and I was excited to see her land and say hello in person. Unfortunately I just missed her as I rode by, but Palisades Rd is still a gorgeous part of the route, and her property is incredible.

After Palisades Rd, it’s one last section of gravel, including a final climb up Three Devils Grade. And then it’s downhill and a tailwind back to Ephrata. Wheeeeee! A solid early-season ride in the books.