On Sunday I did the La Bohn Traverse, as described here. Before I get into route details: there’s been some discussion as to whether it’s better to do the route northbound or southbound. I went northbound, starting at Snoqualmie Pass, and I don’t really recommend that direction.

After talking with other folks that have done the traverse, we agree that southbound, starting at East Fork Foss, is a better way to go. When you go southbound, the cross-country navigation is more clear, and you get a nice runnable descent from Williams Lake down to Goldmeyer. If you go northbound, your longest descent is on the East Fork Foss trail, half of which is steep and rocky and not runnable (at least not for me). Not to mention  northbound gives you a very long climb from Goldmeyer to Williams Lake.

Anyway, no matter what direction you go, it’s a great route with some fun cross-country travel, gorgeous scenery, and a solid amount of elevation change.

I started at 5 am from Snoqualmie Pass (again, do as I say and not as I do: start at the East Fork). I took the almost-immediate left up the old Cascade Crest trail. For an “abandoned” trail it’s in remarkably good shape – better than many “maintained” trails I’ve been on recently! That said, there are a lot of social trails as you near Red Pond. It would be difficult to get truly lost, but you might end up wasting a bit of time wandering around the different unsigned spur trails if you’re not clear on where you’re going.

I was at Red Pass just as the sun was starting to peak over the ridges to the east. The pass itself was in reasonable shape. It’s still holding a little bit of snow on descender’s left, so if in doubt, stay right as you descend. I imagine by next weekend (last weekend of July) most of the snow will be gone.

Recent trip reports indicated that there were a lot of blowdowns on the trail down towards the Middle Fork from Red Pass, and that the trail was especially difficult to follow near Burntboot Creek. I’d been on this section last year and remembered that the trail faded in and out, but it wasn’t that bad. Well, there were some big storms this winter, because now it really IS that bad. If the trail was faint and hard to follow before, it is now completely obliterated by blowdown in places. It’s passable – it just requires patience and perseverance. And daylight. I don’t think you could make it through there in the dark.

After crossing Burntboot Creek I picked up the Middle Fork Snoqualmie trail and started heading up towards Dutch Miller Gap. The trail through here is in excellent shape. Minimal brush, no blow-downs, easy peasy. I assume it’s the MTBers that keep it so awesome? Whoever it is, thanks!

Unfortunately about half-way to Williams Lake I got stung by some kind of wasp/hornet. Amazingly, this was the first time I’d ever been stung. I didn’t experience any severe symptoms at the time, but oddly enough it’s gotten worse in the last 48 hours. I now sit here typing with one normal hand, and one hand that is red, puffy, itchy as hell, and hot to the touch. Apparently I’m having a “large localized reaction” to the sting. I’ll keep carrying that epi-pen in the backcountry, even though it’s heavy. [EDIT: I just learned that it couldn’t have been the first time I’ve been stung, or I wouldn’t be having an allergic reaction. Also, I learned that Benadryl is magic.]

Along with whatever stung me, there were also tons of mosquitoes throughout the entire route. As long as I kept moving, they left me alone. But anytime I slowed down – for instance, to descend Red Pass or to pick my way down a talus field – those little bastards found me and had a feast. So bring your bug spray, and re-apply frequently.

Anyway, back to the route: If you go northbound (which you probably shouldn’t) the cross-country travel begins at Williams Lake, which is also where the scenery really starts to get fantastic. I spent some time wandering around the lake taking photos, and debating whether or not to swim in Williams Lake. (I didn’t. Bad choice. When in doubt, jump in the mountain lake.) 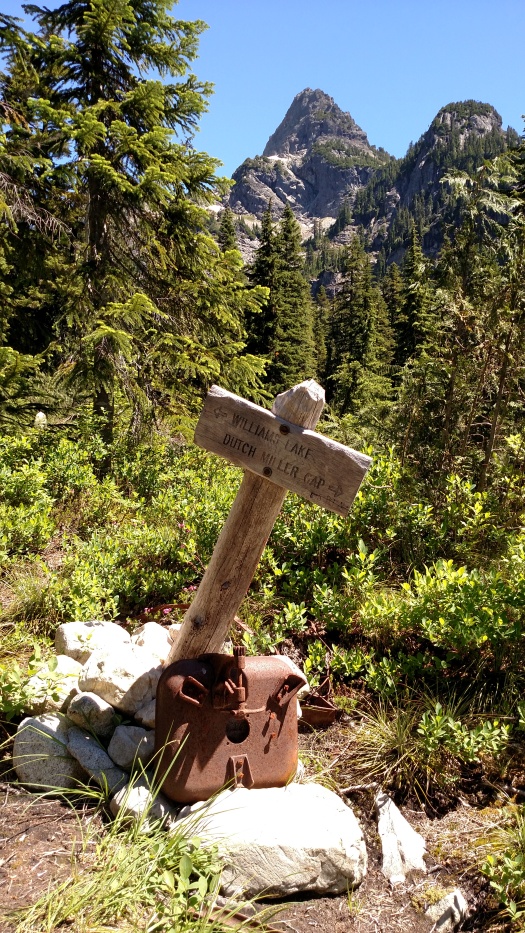 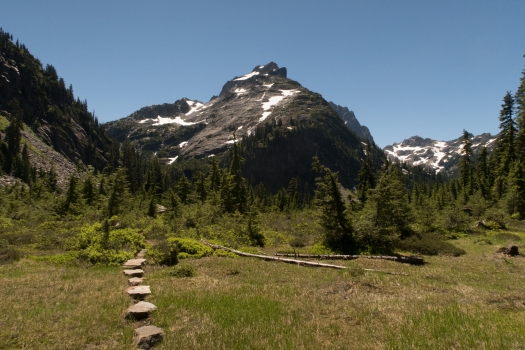 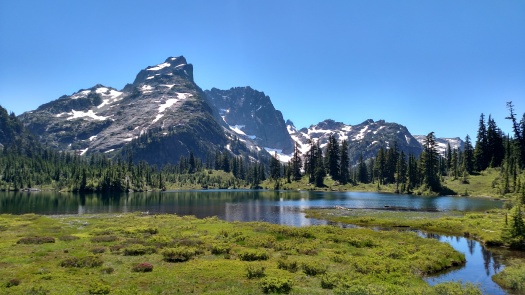 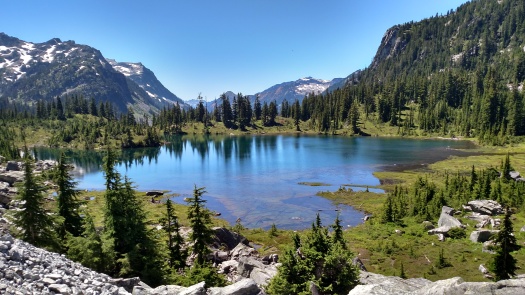 So back down I went, and then further around the lake. Except that didn’t seem right either. So finally I sat down, and while the mosquitoes gnawed away at me, I checked the screen shots I’d saved of the route description. And sure enough, there was mention of a mine. I’d been heading the right direction the first time! Sure, my GPS was a little off, but that happens.

So back I went up the talus slope, past the mine (if you see an abandoned mine, you’re going the right direction!), and up and up to Chain Lakes. The climb was steep and hot and not my favorite, but eventually I reached the top and there was beautiful Chain Lakes laid out in front of me. Worth it! 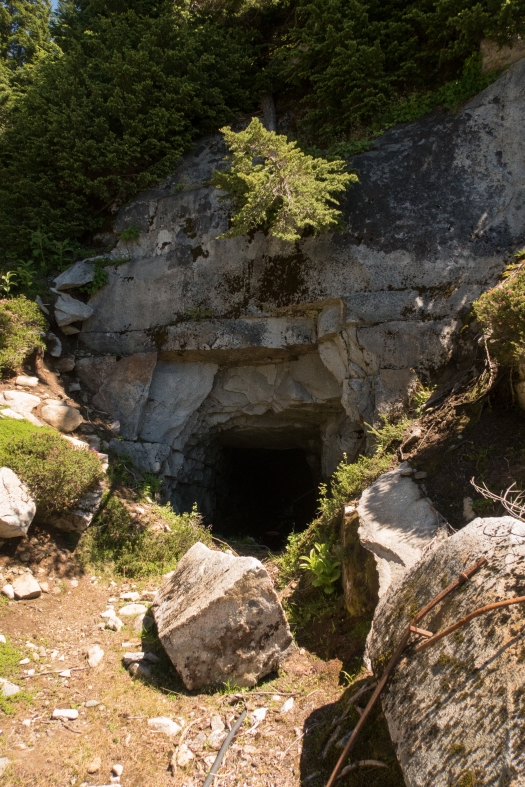 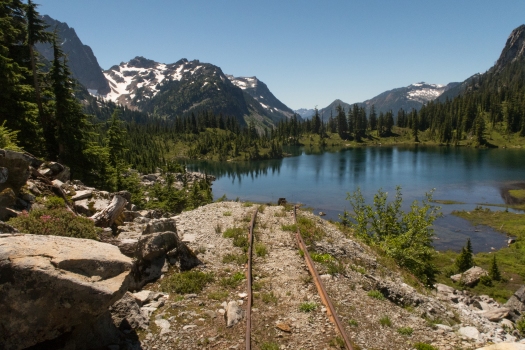 Snow/gear notes: There was still some snow around Chain Lakes and La Bohn, but I was able to avoid it for the most part. And when I did need to cross the snow, it was soft and consolidated (this was around 1 pm on a warm sunny day). I carried traction devices but never used them. I carried trekking poles and loved them, as usual. 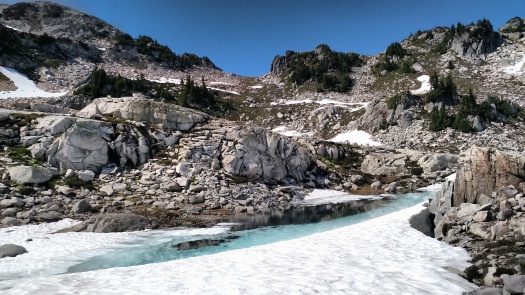 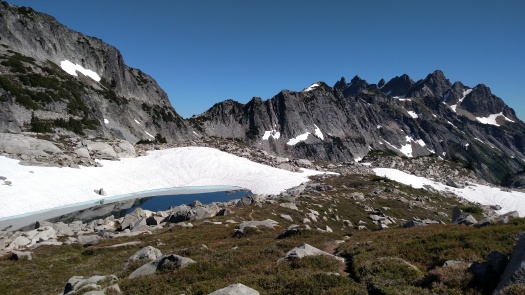 More wandering, and picture-taking, and a little bit of route-finding, and then it was time for the final climb to La Bohn Lake. This was much kinder than the climb from Williams, and it felt like I was at the top in no time. I looked behind me, enjoyed the views, took more pictures, and then started to descend towards the “waterfall route.”

The waterfall route was steep and rocky, but fairly well-trodden and marked with cairns in places. At no point did I question whether or not I was going the right direction. At the bottom of the waterfall, I came to a basin with several creeks running through it. I essentially just started heading downstream and before I knew it, a trail had materialized… and there I was, at Opal Lake.

At this point I was tired, and glad to have the cross-country travel behind me. As I mentioned earlier, the descent from Opal Lake wasn’t exactly smooth sailing (rocky and steep) but it was still nice to be in the home stretch, and the Necklace Valley lakes were a good distraction.

Finally I hit the last 5 mile stretch of the East Fork Foss, which was smooth and runnable. My knees were happy to be on flat terrain again, so off I went at a little trot/shuffle. 16 hrs and 23 minutes after I started, I reached the East Fork Foss trailhead. My Suunto called it 31.6 miles, thereby setting a PR for the slowest 50k I have ever “run.” And also one of the most scenic. 🙂 Strava link/GPX file here.