I had so much fun the last time I did a bike shuttle that I decided to do it again over Memorial Day weekend. I knew the Teanaway was likely to be (very) busy on Memorial Day weekend, so my goal was to explore an area that would be less crowded yet still offer some good views. Koppen Mountain seemed like a good option, but I wanted a few more miles than the direct route from De Roux. And so I came up with a contrived route that I’ve dubbed The Long Way To Koppen:

After leaving my car, I hopped on my road bike and cruised down the dirt/gravel road to the start of the Jungle Creek trail. It turned out the road to Jungle Creek was also washed out a bit, which added another ~1 mile on foot at that end of the route as well. I ended up with approx 8.5 miles and 1000 ft of descent on my bike, and 15.5 miles and 5000 ft of ascent on my feet.

I was pleasantly surprised with how well my road bike handled on the Forest Service roads. It was a little jarring over the washboard sections, but overall not too bad. I’d been contemplating buying a cyclocross bike but it looks like my trusty old road bike will do the trick. It’s nothing fancy, and that’s why it’s perfect: it’s a 2005 Ruby, aluminum frame, Gatorskins tires, low-end components. I can beat it up on gravel roads and then leave it in the bushes at trailheads and it’s unlikely to tempt anyone (I lock it just in case).

Unlike when I did the Icicle Ridge traverse, this time I was smarter/lazier and made the bike segment primarily downhill. I also crammed my running shoes into my pack and used clipless pedals and bike cleats for the ride. When I stashed my bike at the trailhead, I left my helmet, shoes and flat kit behind. It all worked perfectly and I feel like I’m starting to get the system dialed.

As for trail conditions, the first mile or two of Jungle Creek lived up to its name. The start of the trail could be easy to miss, as it’s essentially just a path that takes off into the grass off the FS road (see pic below). The trail along Jungle Creek is rooty and brushy, with a fair number of blowdowns. It’s still completely passable – just a little rough around the edges. As Jungle Creek ascends above 4000 ft, conditions improve considerably, and I even noticed evidence of a recent logout. After the intersection with Way Creek trail, Jungle Creek is in good shape all the way down to Johnson-Medra. There was no snow on Jungle Creek. 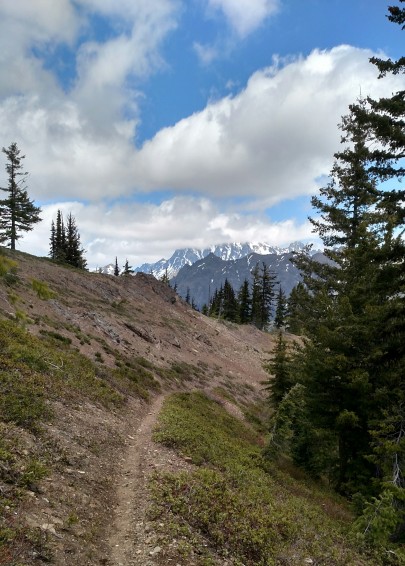 While at the summit I lucked out and watched a rainbow form in the North Fork Teanaway Valley below. Even better, as I was taking a picture of the rainbow, a young couple appeared on the north ridge line. I don’t often have human subjects for my photos and it was great! They were friendly and talkative, and I should’ve paid more attention when they mentioned that it had been a long haul up the north side of Koppen. I also should’ve noted how relieved they looked when I reassured them that the south side was virtually snow-free.

As I soon found out, the north side of Koppen Mountain (unsurprisingly) is holding a lot more snow than the south side. There is a steep hard snowpack in the trees along the north ridge that made route-finding difficult, and had me wishing for my microspikes. I only had trekking poles and there were a couple of traverses that made me pretty uncomfortable. The Koppen Mountain trail from the summit down to the intersection with the De Roux spur trail is mostly covered in snow, and the first few switchbacks of the De Roux spur trail also had patchy snow that obscured the trail. By 4800 ft, however, the trail was clear and it was smooth-sailing all the way back to the road.

All in all, a very fun day in the Teanaway!

One Reply to “The Long Way to Koppen”

Today Tom turned 45 years old! For his present I took him down the Methow River (I swear this is what he asked for - it wasn't my idea)! And now we're watching a storm roll in from our deck, and I'm feeling pretty lucky that he's my person, and I get to help him celebrate another spin around the sun. Happy birthday @tom.dabbles, I love you!
Another great Mother's Day in the books! Grateful for a family who gets me. Rode my bike, met them for a delicious lunch at @skitheloup, then rode my bike some more.👌
Back in the saddle again. 🤠❤️🐴
After-work wander with the goodest dog.
Chelan Butte by bike.
First ride on the new whip! Didn't make it all the way to Hart's Pass (thank goodness, it's way too early for that), but the road is completely clear of snow all the way to Cache Creek. Beyond Cache Creek you'll want a sled or skis (or both...)
Loading Comments...
%d bloggers like this: