That kind of sums up my recent trip to the Olympic Coast. As a coach, I spend a lot of time telling people to plan ahead, make lists,  check the weather/snow level/tides, etc. Usually I’m pretty good about following my own instructions, but earlier this week I gave Papa Bear a run for his money.

Papa Bear Moment 1: Since it was a relatively short trip, I didn’t bother with a packing list. I figured, the van is pretty much already packed, I just need to grab a few essentials and I’ll be on my way. That worked really well for me until I got off the ferry in Kingston and realized I’d forgotten my running shoes at home. Going back to get them would’ve involved getting back on the ferry, driving back to my house, grabbing my shoes – and then turning around and doing it all over again. A huge waste of time, not to mention paying for two additional ferry tickets, which aren’t cheap.  Luckily I found Poulsbo Running and they saved the day! The owner, Chris, helped me find a great pair of replacement shoes and I was back on my way after only a short detour. Papa Bear says: “Make a list, and then actually use it.”

With new shoes in hand, I headed for Neah Bay, where I stopped at the Makah Museum to  check out the exhibits, buy a book for Rowan, and buy a Makah Recreation Pass (required for the Cape Flattery and Shi Shi Beach trailheads). The Pass is only $10 and it’s good for the year – a great deal!

The museum was fantastic, and if you’re ever near Neah Bay I highly recommend a visit. Among many other artifacts, they have an amazing life-sized replica of a longhouse. As with real longhouses, it’s dimly lit using only natural light allowed in through gaps in the roof planking. It took a couple minutes for my eyes to adjust. There were (fake) embers burning in a firepit on the floor, animal skins drying in a corner, and benches for sleeping. 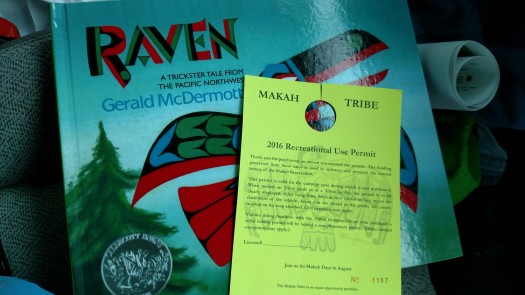 Recreation Pass in hand, I headed for Cape Flattery. It is a short little trail, very scenic and family-friendly. I can’t wait to take Rowan back there. It’s only 1.5 miles round  trip but you’re rewarded with amazing views.

After Cape Flattery, I headed approx 30 minutes down the road to Shi Shi Beach. Follow the signs in town to Shi Shi Beach. Do not listen to Google Maps; it doesn’t know what it’s talking about on the Makah Reservation. More on that later.

I’d been to Shi Shi over a decade ago, but didn’t remember much of the trail. Currently, the trail is in reasonable shape for the first mile, and a mud pit for the second mile. Nothing you can’t walk around or through, but just be prepared to get your feet wet and dirty. Don’t forget to explore the spur trails. I got some of my best views from a clearing on a clifftop that I accessed via a spur trail. The beach is stunning and would make a great easy backpacking destination, but the views were better from the clifftops.

Papa Bear Moment 2: After Shi Shi it was time to head to Ozette to camp for the night. I’d been planning to drive directly south from Shi Shi to Ozette, via a road called “Makah Passage.” Google maps says it’s possible. But earlier in the day a young Makah woman working at the museum had told me that unfortunately I couldn’t drive directly from Shi-Shi to Ozette, and instead I’d have to go back the way I came.

Pro tip: When Google maps directs you to take a road, but a local resident tells you that road doesn’t exist, listen to the local. But I’d been possessed by the bumbling spirit of Papa Bear, so I ignored the woman at the museum and proceeded to drive down the dark, gravel, potholed Makah Passage Rd, only to reach a locked gate after 5 miles. At which point I turned around and went all the way out the way I came, just like the woman had said. As I mentioned earlier, do not listen to Google Maps, it doesn’t know what it’s talking about on the Makah Reservation.

Finally, after approx 2 hrs of driving (including the unnecessary 10 miles on Makah Passage Rd), I arrived at Ozette Campground. The park website noted that “some campsites may be flooded.” I thought this meant that there would be some standing water, and it might be too wet to pitch a tent in some sites.
What they really mean is that Ozette Lake has literally overtaken more than half the campground.  There were 1-2 sites that are probably dry enough to park a van or RV. I don’t think you’d want to pitch a tent in any of them. I’m not calling this a Papa Bear Moment because part of the reason we got the van is so that I could essentially camp anywhere. So I camped at the Ozette trailhead instead, and it was all good.

The next morning I was up bright and early. I knew there was a low tide at around 7 am, and I wanted to get going well before then, since I had some forest-walking to do before I hit the beach.

I had originally planned on doing the Ozette Loop counterclockwise: head out to the water, take a left, walk along the beach, take another left to get back to the trailhead. Easy peasy. However, at the last minute I changed my mind and decided to go clockwise. You can see this coming, right?

Papa Bear Moment 3: I reached the beach and headed left. It was beautiful, the sun was rising, the tide was low, life was grand. After 1.5 miles, I looked at my map and realized my mistake. I was supposed to be going clockwise, which meant I should’ve taken a right (north) at the beach. Normally a few extra miles wouldn’t be a big deal, but it was a spring tide which meant the high tide  was extra high – and I’d just wasted precious time during the low tide wandering down the beach in the wrong direction. Lesson one? Is that lesson one?

At this point I had a little chat with myself. I was not in any real danger, but most wilderness emergencies occur because a series of small mistakes add up to a big problem. I had already made 1-2 mistakes: going the wrong way on the beach was definitely a mistake. Hiking during a spring tide wasn’t a mistake, per se, but it didn’t leave a lot of room for error. It was time to start paying attention – as I always should be.

Fortunately, the rest of the run/hike was relatively Papa Bear-free. It was also incredibly scenic. I thought I wouldn’t be impressed by the coast because well, it’s not the mountains. But the Olympic Coast is wild and rugged and remote in its own right. And I’ve never seen so many bald eagles in one place. Literally dozens of them.

I eventually reached Cape Alava and headed inland, where I started finding slips of paper along the trail. Apparently a group of high school students were on a backpacking trip and their final assignment was to write a question on a slip of paper, which was then placed along the trail so that students could read and ponder the questions as they hiked out. I had the good fortune on being on the trail just before the slips of paper were picked up by a teacher (they probably weren’t on the ground for more than 2 hours total). See below for some examples. Pretty cool.

2 Replies to “Papa Bear Goes to the Beach”

I'm learning a lot about wildfire. This is Lucky Jim Bluff, less than a mile from our house, flaring up last night. If you had shown me this pic two months ago I definitely would've freaked out. And I confess it was still kinda scary to watch it burn last night.
Home.
Mustang Ali is taking a "smoke break" right now too, which means I've been able to work with her these last couple days. Turns out mustangs and wildfires have a lot in common:
When in doubt, mountains and dogs.
I went for a long walk to a small lake, where I took a quick swim and a lot of pictures.
We left the valley today. We were already planning to visit friends on the west side this weekend, so we just headed over a little early...and with all of our most important belongings. 😬
Loading Comments...
%d bloggers like this: