Last week my brother, my husband and I went backpacking. We did the White Pass-Pilot Ridge loop, which was beautiful, challenging in some sections, and worth every step.

We started at the North Fork Sauk TH on Monday around noon. The wildfire situation in WA is really bad this year, so I called the ranger station Monday morning to confirm that no new fires had started overnight. The ranger mentioned one small fire near Red Mountain but assured me it was nowhere near the trail. They also said that the switchbacks up to White Pass were “brutal” and to avoid them in the heat of the day. Oopsy.

The first 5-6 miles of the trail were easy peasy along the river, and we ambled along, chatting and enjoying the shade on the hot afternoon. We hit the switchbacks at about 2 pm, and they were indeed challenging, especially with the sun beating down. It’d been a long time since I’d carried a full pack (when I fastpack by myself, I tend to skip anything that isn’t an absolute necessity, but the boys were not interested in that kind of trip). The trail up to White Pass was a good reminder of just how important pack weight can be.

After the switchbacks, the trail traversed along a hillside for another mile or so before reaching White Pass, our camp for the night.

The next morning as we were making breakfast we noticed a helicopter circling a nearby valley. We could just barely make out “Snohomish County Sherriff” markings on the sides. We were joking around that they had tracked Eli and were on their way to bust him… And then the helicopter started to approach our camp… And then it hovered over the grassy meadow next to us… and then it landed. Two dudes got out and started walking directly towards us. At this point, I ran for my pack and made sure I hadn’t accidentally activated my SOS on my satellite messenger. Nope, all good. (Whew!) But the guys were still headed our way.

It turned out they were looking for a missing hiker who was two days overdue after attempting to summit Glacier. (The missing hiker was found the next day, lost and on the wrong trail, but generally safe and sound). The heli guys were from Snohomish County Helicopter Rescue Team. They were competent, friendly, and exactly who you would want searching for you if you were lost. We were really impressed with them and we all decided to buy HRT shirts when we returned to civilization. If you ever recreate anywhere that is unreachable by ambulance, please consider donating. Support the last resort! 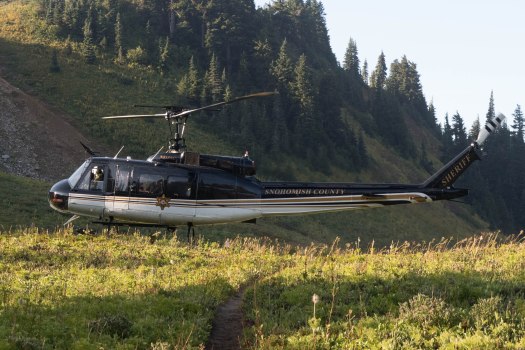 After the helicopter excitement, we hit the trail and spent most of the morning on the PCT. The first couple miles were a bit rutted but there were WTA volunteers out improving the drainage, which was awesome. Thank you! In general, the morning was easy walking. I took a side trip up Kodak Peak as well as a side trip down to Meander Meadows, while the boys made a beeline for Blue Lake. FYI: they ran out of water by the time they reached Blue Lake, but because I refilled at Meander Meadows I didn’t have the same problem. So you might want to consider adding on the Meander Meadows side trip if you do this route anytime this year…

We took the High Route to Blue Lake, which was a beautiful but rocky bootpath to the lake. I’d read that Blue Lake was super scenic and relatively remote. The former was true but the latter was not. We were one of six groups camped there that night. I think the wildfires are consolidating everybody onto all the remaining backpacking routes that aren’t on fire. The good news is, everybody who was camped there was friendly and relatively quiet.

We had a quick dip in the (very cold) lake, ate dinner along the shore, watched the sunset, and then headed to bed.

Day 3: Blue Lake back to the trailhead

I woke up at 4:40 am (no alarm) and decided to head up Johnson Mountain. It was dark when I left camp, and I accidentally reached the summit just as the sun was peeking over the mountains. It was an incredible morning.

After watching the sunrise I descended back to camp and had coffee and breakfast with the boys before we headed out for our last day along Pilot Ridge. We filled up on water before leaving Blue Lake, as we had been warned there was no water along Pilot Ridge (and that was true). It was a fun day of ridge-walking, followed by a steep descent a little too long for comfort. But soon enough we were back at the North Fork Sauk of the river, and then it was just a short 2 miles until the car.

This was one of those trips I will remember for a long time. So fun to spend a few days in the wilderness with my husband and brother, doing nothing but hiking, eating, swimming, talking, sleeping and laughing.

Today Tom turned 45 years old! For his present I took him down the Methow River (I swear this is what he asked for - it wasn't my idea)! And now we're watching a storm roll in from our deck, and I'm feeling pretty lucky that he's my person, and I get to help him celebrate another spin around the sun. Happy birthday @tom.dabbles, I love you!
Another great Mother's Day in the books! Grateful for a family who gets me. Rode my bike, met them for a delicious lunch at @skitheloup, then rode my bike some more.👌
Back in the saddle again. 🤠❤️🐴
After-work wander with the goodest dog.
Chelan Butte by bike.
First ride on the new whip! Didn't make it all the way to Hart's Pass (thank goodness, it's way too early for that), but the road is completely clear of snow all the way to Cache Creek. Beyond Cache Creek you'll want a sled or skis (or both...)
Loading Comments...
%d bloggers like this: