“…It’s easy to think that pioneering in the old way no longer exists. Some of us try to keep a modern version of it alive through our imagination, creating new forms of adventure on paths previously travelled.” – Joe Puryear

On Saturday  July 11, 2015 I traversed North Cascades National Park north unit, starting from Ross Dam trailhead and finishing at the Hannegan Pass trailhead, for a total of 48.8 miles and 10,544 ft of elevation gain in 17:30:49.  Strava link here. The trip was unsupported, which is defined as solo, carrying all of your own gear and food from start to finish, and only taking water from natural sources.

This route has been on my mind for a few months… Ever since I got back from doing the Zion Traverse, I’ve wanted to do a similar traverse in North Cascades National Park. North Cascades is by far my favorite park, and I love the idea of crossing it on foot and getting a chance to see some of the more remote interior. The route also interested me because as far as I know, no other woman has done it in one day.

Although I believe I’m the first woman to do it one day, and the route is indeed remote, it’s not exactly untouched. The route is described in the guide book Hiking the North Cascades by Eric Molvar, and an unknown number of people have tackled it as a multi-day trip. Molvar dubs it the “Whatcom Pass Expedition” and estimates it should take backpackers 6-9 days to complete the journey.

To the best of my knowledge, Luke Distelhorst is the only other person to have done this traverse in one day. He completed it in just over 16 hours in August 2014, including ~10 bonus miles on Copper Ridge. You can read his trip report here. [Edit: Ultramarathon pioneer Doug McKeever did it in 1987 in 9:18 (!!)]

My goal with this route – and any future routes – isn’t so much to set fastest known times (FKTs), but to set first known times for women.  A quick glance at the FKT website shows that it’s primarily a male-dominated game, particularly when it comes to the longer unsupported runs. Even the guidelines on the FKT site state that you should be “true gentleman” and state your intentions in advance.

Don’t get me wrong – there are some bad-ass women setting FKTs. Heather Anderson and her self-supported Pacific Crest Trail speed record. Candice Burt and her unsupported Wonderland FKT. Katherine Cook and her self-supported journey on the challenging Pacific Northwest Trail. And others I’m sure I’ve missed! But the fact is, they are outnumbered by dudes.

It doesn’t have to be that way. My hope is that by getting out there, having fun (most of the time), and returning (relatively) unscathed, other women will think “Hell, if she can do it, I can do it. And I bet I can do it even faster!” 🙂

Anyway. On to the trip report. I drove up from Seattle on Friday night, planning to camp at Colonial Creek Campground. Hahaha! As if there would be an open site at 9 pm on a Friday night in July. Luckily I was driving the mothership, so I found a flat spot to park at the trailhead and crawled into the back of my truck to sleep.

I woke up 15 minutes before the alarm, at 3:30 am. In the distance, I could hear thunder rumbling. I quickly heated up some water for coffee and oatmeal, and just as the water started to boil, big fat drops of rain began to fall from the sky. I jumped in the front seat of my car and drank my coffee while watching the rain on the windshield. It was actually a great way to gather my thoughts before starting out. After a few minutes, the downpour ended as abruptly as it started. I made sure I had everything I needed and headed off down the Ross Dam trail at 4:40 am.

The first section of the trail is along Ross Lake, and I looked across the lake at the East Bank trail, knowing that Kathy and Lisa were probably starting out around this time too. They were planning to do a Double Desolation/Ross Lake traverse (I’ll link Kathy’s report as soon as it’s up). It was cool to know that other women were out there in the dark morning, heading off to their own adventures.

I quickly reached the junction with Big Beaver trail and headed away from the lake, up the drainage. It started to rain again, and I laughed at myself for trying to stay dry during breakfast. Dry was not happening today. As I climbed up Beaver Pass, the sky got darker and darker, and thunder boomed around me. The rain intensified. Luckily, Beaver Pass is still well below treeline so I never felt in danger. Just cold and wet.

As I crested Beaver Pass, I saw my first person of the day: a friendly backpacker carrying an umbrella and wearing a cuben fiber skirt. (Perhaps his tent serving double duty as rain gear?) He was super nice and we quickly determined that we’d each come from exactly where the other was going. He warned me that there was a washout on Little Beaver trail, and that because the river was running so high (due to all the rain), I’d need to bushwhack around the washout rather than try to ford the creek.

“It’s a pretty nasty bushwhack.” he said. “You’re going to get super wet and dirty. Be careful.” I looked down at myself, already completely soaked and covered in mud, and laughed. I know he was just being kind-hearted, but it was still funny.

After many miles on Big Beaver trail, I finally reached Little Beaver trail. Little Beaver wasn’t in great condition – brushy, overgrown, and side-sloping. In some places the brambles were overhead and fully covering the trail. I yelled out a few “Hey Bears” as I pushed blindly through the berry thickets. Eventually I reached the section of trail the backpacker had warned me about, and found his info to be right on the mark. The creek was running high and fast. The bushwhack was indeed wet and dirty. But it was a short section, and after 10-15 minutes I was back on trail, only a little worse for wear. (Unfortunately no photos from the bushwhack – my hands were full of alder and devil’s club.)

After Little Beaver trail I headed up Brush Creek towards Whatcom Pass. Just as I made the turn on to Brush Creek, the sky started to clear and Whatcom Peak and the Challenger Glacier appeared in the distance. There were waterfalls pouring down the cliffs around me, raging from the recent rainfall. It was stunning. I may have actually said out loud “I love you, North Cascades.”

The climb to Whatcom Pass was a tough one. I was now approx 30 miles in, soaked to the bone, and although it had stopped raining, it was only getting colder and windier as I ascended. Finally, I reached the pass. And looked down. And  there, 30 miles into the wilderness, someone had written in the dirt:  “Hi JK!” It was a huge morale boost. I wasn’t totally sure it was for me – maybe someone else had the same initials? Even so, it perked me up for at least an hour. Although I never did see anyone I knew while I was on the trail, it still felt like friends were nearby, wishing me well. (Later I learned that Luke and SHaL happened to be on a backpacking trip that same weekend, knew I was going to be out there, and left the note for me in the dirt. Thanks guys!!)

I descended Whatcom Pass and reached a signed junction announcing I only had 11.9 miles to go. 12 miles. I can do that. At this point the trail flattened out a bit and I was able to get in some reasonable running. Let’s be real and call it jogging. Wogging? Anyway, I was moving faster than I had in awhile, and that felt good.

Next up came one of the highlights of the route: the cable car across the Chilliwack River! One of the downsides to doing these things alone is that I had no one to take my picture as I hauled myself across the river. Oh well, you get the idea: 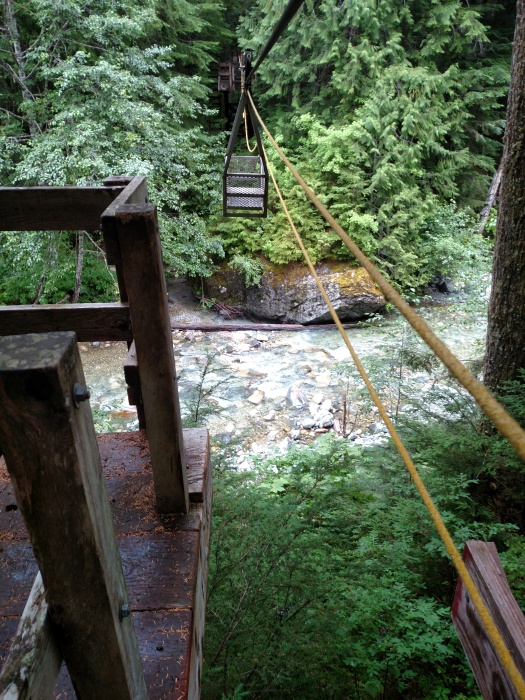 And then, finally, I was climbing up to Hannegan Pass. The last climb of the day. It was almost dusk, but still light enough to see the wildflower-filled meadows just before the pass, and the wispy clouds gathered around the nearby peaks. One thing I loved about this route is that the more scenic sections (Whatcom and Hannegan Pass) were towards the end, providing a great distraction during the final push.

The last four miles down the west side of Hannegan Pass were not comfortable. My legs were tired, my feet were sore, the trail was rocky, I’d been wet and cold for hours, and I was never doing anything like this ever again (or at least for the next couple weeks). However, the only way out was through, so I kept moving, and 17.5 hrs after I started, I finally reached the trailhead where my husband Tom was waiting for me. Done and done!

As always, this little adventure would not have been possible without Tom. I am so lucky to have him. I also need to give a big thank you to Haley and Liam Pingree, for helping set up the shuttle AND for inviting Rowan to a “sleepover” (aka babysitting) while I played in the North Cascades. You rock!