This route is about 55 miles and has three big climbs and about 15,000ft of elevation gain… This is a remote route with no road crossings and very few people… Excellent navigation skills are essential especially on Six Ridge Trail where the trail itself often disappears in meadows. Expect this route to take a lot longer than a 50 miler would normally take. …Recommend doing the loop counter clockwise to get the most difficult navigating first and before it gets dark.

My years as a triathlete taught me a thing or two about detail-oriented event preparation, and I went into this like a good little girl scout: as prepared as I could be. Three guys (John Barrickman, Chris Bellevie, and Tim Schofield) had done the route the weekend before me, and I messaged all of them for tips and pointers. They were so helpful I was worried I had ruined the fun for myself and made it “too easy.” Not to worry! Six Ridge is still a beast, even if you get a few pointers from those who have gone before you.

I tucked in my daughter at 7 pm on Wednesday and left shortly thereafter for the long drive to the Olympic Peninsula. As always, I am thankful to my husband for holding down the fort while I was gone. I am also grateful to my mom, who shuttled our daughter from preschool to ballet on Thursday AND let our dog out mid-day. Even though I’m often by myself on these long runs, I definitely couldn’t do them on my own.

Wednesday night I camped in the back of my truck at the Graves Creek campground. I pulled in at 1130 pm and was asleep within minutes. The alarm went off at 330 am – too soon! As I was pulling on my running clothes I could hear the distinctive hoot of a barred owl in the campground. We have a pair of barred owls that live in our backyard, so the hooting was a familiar and comforting sound as I prepared for the long day ahead of me.

I was at the trailhead and running by 4:26 am. The first section up Graves Creek trail was relatively easy to follow, and if anything I was surprised at how quickly it got light – it made me wish I’d started a little earlier, to take advantage of the cool morning hours.
It was daylight by the time I reached Success Creek. John, the first guy to do this route as part of the UPWC, mentioned that he managed to keep his feet dry across this creek, but I could see right away that I was going to be wading through. I’ve never met John in person but I bet he’s taller than me! 🙂
I had figured this might be the case and wore mesh running shoes that I hoped would drain quickly – they did, but my feet still stayed wet the entire time I was out there. It got a little ugly.

After a fair amount of climbing I reached Sundown Lake, and started skirting the edge of the lake. Then I remembered that my route wasn’t supposed to go alongside the lake. I got out my map, backtracked, and found the trail junction I had missed the first time through.

From Sundown Lake I headed up towards Six Ridge. I had been warned that this was the crux of the route, and I had my map, compass and GPS at the ready. Shortly after you drop over Six Ridge Pass, the trail disappears into meadows, as promised. I ended up a bit south of McGravey Lake but managed to bushwhack uphill through some heavy brush until I caught sight of the lake. I was so happy to find that lake, as it indicated I was back on track!

I also had some minor difficulties near Belview Shelter. All of the guys had warned me about the trail there (or lack thereof) and Tim had given me specific instructions re: how to stay on route in that particularly difficult section. Even when I followed his very helpful instructions to the letter, I lost the trail and found myself bushwhacking again, this time through a muddy bog. I backtracked and then regained the trail.

That was the funniest thing about Six Ridge. You would be on a somewhat reasonable trail, and then suddenly it would disappear, only to reappear clear as day but in a completely different place, as though nothing ever happened.

When I did my planning for this route, Six Ridge had loomed large. Perhaps too large. I’d been so focused on the navigation section of the loop that I hadn’t really thought about the 55+ miles and 15,000 ft of elevation gain that were also part of the deal. I knew the worst of the navigation was behind me after I cleared Belview Shelter, and when I checked in with my husband via Delorme I wrote “Nav section is pretty much done. Now all I gotta do is log the miles. :)”

Ha! Technically I was right, but there were still a lot of miles to be logged, and a lot of elevation to gain. Even though the challenging navigation ended after Belview, the rest of Six Ridge was hot and exposed, with many steep ups and downs. When I finally descended off Six Ridge, again I thought I was home-free. Somehow I hadn’t processed the long climb up the North Skokomish trail, or the climb up to O’Neil Pass.

Meanwhile, my feet had been wet since mile 3 and weren’t drying at all. I could feel hot spots forming, so I stopped, took off my socks and shoes, and doctored up my feet. Unfortunately, 30 minutes later I was stopped again. I don’t typically have blister problems, but it was clear they were going to be an issue that day. Luckily, in addition to my 1st aid kit I’d also packed a spare pair of socks. I wasn’t even half-way through the route and didn’t want to swap out my socks just yet, but upon looking at my feet (red, raw and bleeding already) I knew it would be foolish to wait. On went the clean dry socks. Ahhh… so nice!

Until the next river ford. And the next. And the next. It became clear that dry feet were an impossibility on this route. I decided I would just stop thinking about my feet. I’d done everything I could to solve the problem. “It is what it is.”

As the day started to draw to a close, I realized I was going to be out there well into the night. This was a low point for me. The trip had stopped being Type 1 fun and was now clearly in the realm of Type 2 fun. I wasn’t enjoying myself and I wanted off this roller coaster ride. Of course, you can’t call Search and Rescue because your feet hurt and you’re not having fun anymore, so I trudged on.

For every low point, there’s a high point, and mine came when I reached O’Neil Pass just as the sun was setting. O’Neil Pass Trail was beautiful. The alpine meadows were lit up in the gloaming, and a herd of elk grazed near a solitary black bear. The elk scattered down a hill as I approached, and I learned that baby elk make a squeaking and squealing noise when startled! 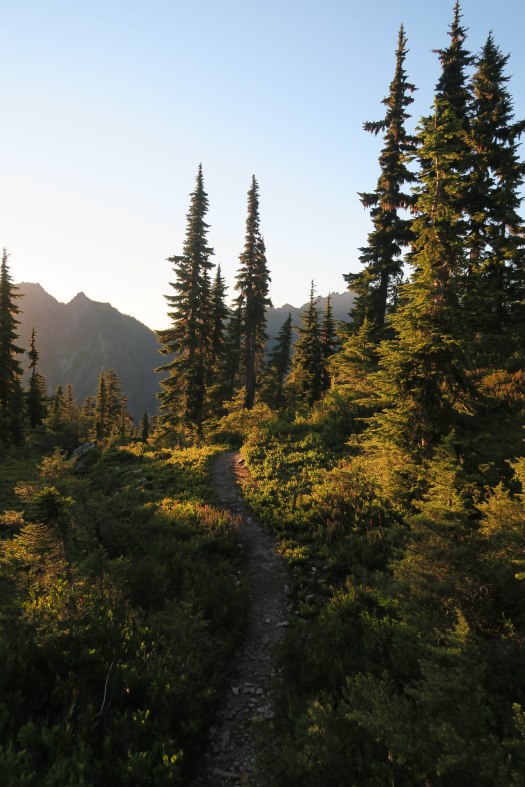 By 1030 pm, the sun was down and it was headlamp time (again). Although I was trying to ignore the blisters, my feet were in a lot of pain and it hurt more to run than to walk. On the other hand, I just wanted to be DONE and walking was so damn slow. The result was a strange shuffle/walk combo.

I was also exhausted. By 2 am I was essentially sleepwalking, stumbling on and off the trail. I decided it was time for a quick nap. It was relatively cool when I stopped moving, so I drew my hood up around my head, pulled out my “emergency” foil blanket, and lay down on my back in the middle of the trail, staring up at the stars. I was asleep within seconds. I woke up 45 minutes later and felt much better, so I got up and started moving again.

By 5 am I found myself sleepwalking again, so I took one more 10-minute nap. After waking up from the second nap, I was determined to just get this done. I had less than 8 miles to go and I figured if I was going to sleep, it might as well be in the comfort of my truck rather than on the cold hard trail.

As dawn broke, I started to hallucinate, which was really fascinating. I was looking for Pony Bridge and I kept seeing bridges across the river, but the trail never led to them. I decided they must be abandoned bridges… and then I realized that they weren’t bridges at all. Just hallucinations of a tired brain.

I also saw a number of animals (wolves, bears, lions, deer) that turned out to be logs, or big rocks, or nothing at all. I even saw a group of people standing to the side of the trail, and I could hear their voices clearly. But then they turned into trees and their voices became the babbling river. To me, what was most interesting is that I was fully aware I was hallucinating, so I was able to be objective about the experience even as it was happening. This also meant that the giant black wolf (aka tree stump) wasn’t actually scary, because I knew it was all in my head.

I used a Goalzero Flip 10 to charge my Suunto, but it still died just a few minutes before the very end, so Strava shows my total elapsed time as 27:50:52, but it was really more like 27:53. Whatever. It was a long day!

I got in my car, ate some food, and was surprised at how alert I felt. I started to drive home. After 5 minutes of driving, I glanced out the window at the river to my right. There I saw a man playing on a log in the middle of the river. I can still see him vividly. He was wearing a flat-bill hat, a black shirt, and baggy jeans. I looked again and it was just a log. I immediately pulled over and crawled into the back of my truck for more sleep before I headed home.

Thanks to James Varner for suggesting the route and to Ultrapedestrian Ras for putting together the Wilderness Challenge! Fun times! (Fun like childbirth!)